Cape Wrath Lighthouse stands at the most north-westerly point of mainland Great Britain, on Cape Wrath in Sutherland. Durness is the closest village, ten miles to the south-east.

The lighthouse was built in 1828 by Robert Stevenson and was manned until 1998, when it was converted to automatic operation by the Northern Lighthouse Board.[1] The light is 400 feet above sea level, is visible for 22 nautical miles.[1]

Overlooking the Cape are the ruins of the Lloyd's signal station, which was used to monitor shipping and was built in the 19th century.[2][3]

The lighthouse was built in 1828. Due to its height the light was often obscured by low cloud or fog and in the early 20th century plans were drawn up to build an additional low light. This involved the construction of tunnels into the headland, bridges and building on the very tip of the rocks below the headland. Plans were drawn up by David Alan Stevenson, Robert's grandson and work began in 1913 but was suspended at the start of the First World War and never restarted.[4]

The light was originally a paraffin lamp with red and white reflectors. This was replaced by mercury vapour lamps in 1978 and in 1980 an electrical temporary power beam was installed with a gear less pedestal and array system later in the same year. The fog-horn at the site was discontinued in 2001.[4]

The current light characteristic is four white flashes every 30 seconds (Fl(4).W.30s) and is visible for 22 nautical miles.[1] The optics are a first order Fresnel lens and the light has a power rating of 200,000 candela.[4]

Much of the material for the lighthouse was quarried locally during construction, particularly from Clais Charnach.[4] 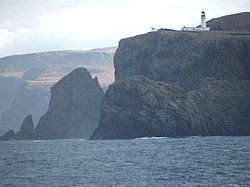 Cape Wrath and the lighthouse from the sea