Portmahomack is a small fishing village on the Tarbat Peninsula, by Tarbat Ness, within a part of Cromartyshire on the Moray Firth. Portmahomack is in the parish of Tarbat. The village is on a sandy bay and has a small harbour designed by Thomas Telford.

Tarbat Ness Lighthouse is about three miles from the village at the end of the headland.

Portmahomack lies inside the Moray Firth Special Area of Conservation [1] with the associated dolphin and whale watching activity. 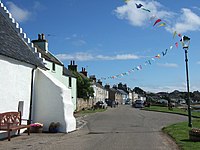 The name of the village is from the Gaelic Port Mo Chalmaig, meaning 'Haven of My [i.e. 'Saint'] Colmóc')

Ballone Castle lies about a mile from the village. There is evidence of early settlement and the area seems to have been the site of significant activity during the time of the Picts and the Vikings.

The village has a primary school, golf course, hotel, a number of places to eat and a shop with a sub-post office. The nearest rail access is at Fearn railway station. The nearest town with full services is Tain lying approximately ten miles to the west, and which also has a railway station.

The hamlet of Rockfield in Ross-shire is nearby and is accessed by way of Portmahomack.

This gentle strand location on the peninsula has long been known to be on the site of early settlements. The earliest evidence of habitation is provided by shell middens pointing to settlement as early as one or two thousand years BC.

There are the remains of an Iron Age broch a little to the west of the village. Finds of elaborate early Christian carved stones dating to the 8th-9th centuries (including one with an inscription), in and around the churchyard, had long suggested that Portmahomack was the site of an important early church.

In 1822, Rev Grant, minister of Boharn, described "a beautiful square fortification of about 100 paces of a side". It was tentatively identified as a Roman camp in 1949 although this has not been positively confirmed.[2]

Portmahomack is the site of the first confirmed Pictish monastery and the subject between 1994 and 2007 of one of the largest archaeological investigations in the Highlands. The monastery began around 550 AD and was destroyed by fire in about 800 AD. It had a burial ground with cist and head-support burials, a stone church, at least four monumental stone crosses and workshops making church plate and early Christian books. The making of vellum in an early mediæval site was detected for the first time here by Cecily Spall of FAS Ltd.

Over two hundred pieces of sculpture have been found, some of it broken up in a layer of burning suggesting that the monastic buildings were violently destroyed, possibly in a Viking raid, about the year 800. The tradition of holiness survived sufficiently strongly to allow the site to become that of the later mediæval parish church of St Colmóc.

The present restored building, adapted to house a museum after lying empty for a number of years, has been shown by archaeological investigation to be itself a monument of great interest, of multi-phase construction, the oldest part (the east wall of the crypt) having been built as early as the 9th century. The museum and visitor centre in St Colmóc's Church is managed by the Tarbat Historic Trust.

The precise identity of 'Colmóc' is uncertain. The name is an 'affectionate' or hypocoristic form, and could refer either to one of the many early Irish holy men with the common name of Colmán (e.g. Colmán of Lindisfarne), or to St. Columba (Old Irish Colm Cille).

The Battle of Tarbat Ness was a land battle fought (c 1030-1040) between Thorfinn the Mighty, Earl of Caithness and the King of Scotland.

In the Battle of Tarbat in the 1480s, a raiding party from the Clan Mackay of Strathnaver were cornered in the Tarbat church by the Clan Ross, who killed many of them before setting fire to the church.

The New Statistical Account of Scotland (1840) makes reference to new and improved agricultural practices being introduced from East Lothian. The area benefited as a result and there are many newspaper accounts of grain shipments from Portmahomack to Leith and London during the 19th century.

Portmahomack was a centre for the white fishing boom that lasted up until the early part of the 20th century. The bay was so full of boats at time that it was said you could walk from the harbour to the rocks on the other side of the bay without getting wet.

The direct Fendom road to Tain was closed due to the construction of the airfield at RAF Tain. Parts of the area were evacuated for a period of months to allow landing exercises to be carried out in preparation for D Day in 1944. The propaganda film Before the Raid, directed by Jiri Weiss, was filmed in Portmahomack in 1943.

Today, Portmahomack is a tourist destination with its traditional harbour, swimming beach, golf, dolphin watching, fishing and other watersports. It has a permanent population of between 500 and 600 residents. In the former parish church the Tarbat Discovery Centre, designed by exhibition consultants Higgins Gardner & Partners, houses displays on local history, and many of the finds from several seasons of excavation within the church itself, and in the fields surrounding the churchyard.

Notable among these are a large collection of fragments of Pictish stone sculpture, many of them superbly carved with figures of ecclesiastics, fantastic and realistic animals, 'Celtic' interlace and key-pattern, and other motifs. The large elaborate late 17th/early 18th century bell-turret on the west gable of the church is an unusual and distinctive feature.

Some important Pictish carved stones from Portmahomack are on display in the Museum of Scotland, Edinburgh with replicas in the Tarbat Discovery Centre.

Two other important historic buildings in Portmahomack are adjoining 'girnals' (storehouses), built in the late 17th century and 1779, overlooking the harbour (restored as housing). The former is one of the oldest such buildings to survive. The village also features a number of attractive 18th/early 19th century houses lining the shore.

The harbour was improved by the famous engineer Thomas Telford and was important in grain export in the 19th century.

Ballone Castle was built in the 16th century. It was unoccupied for a couple of centuries and fell into ruin. In the 1990s it was purchased and restored by an architect. The original castle was built on a Z plan and is unusual in having one round tower and one rectangular tower. Page text.[3]