Graemsay is an island amongst the Orkney islands, lying in the western approaches to Scapa Flow, which is to say the main entrance for ferries. The island has two lighthouses warding the sound.

Graemsay is a peedie island which lies between Hoy and Stromness on Mainland Orkney, separated from Mainland by Clestrain Sound. The island is 1,011 acres in area and is mainly crofted, with a population of recorded at just 21 souls in 2001.

The island's geology is old red sandstone of the Devonian period, with two volcanic faults. On the north coast there is granite-schist, which is a great rarity in Orkney.

Graemsay is surrounded by strong tidal races, known locally as roosts. A ferry service links the island with Stromness and Moaness on Hoy.

Parts of the island are largely undeveloped and are a haven for wild plants. 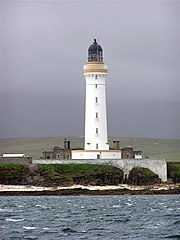 As with many other Orkney Islands, there is a connection to the Irish Church. There are the remains of two early churches, dedicated to St Bride and to St Columba.[1] who are both saints of Irish origin.

The island has two lighthouses, Hoy High (NE) and Hoy Low (NW), both built in 1851 by Alan Stevenson[2] for the 19th century herring industry.

At the Point of Oxan in the far north west, in Burra Sound, are block ships, which were scuttled deliberately during Second World War. This is a common feature of the straits/former straits around Scapa Flow

The school closed in 1996 and the island's children travel daily by boat to school in Stromness on the ferry 'Graemsay.'[1]