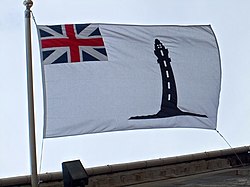 The Northern Lighthouse Board, more formally named The Commissioners of Northern Light Houses is the General Lighthouse Authority for the waters of Scotland and the Isle of Man. It is a non-departmental public body responsible for marine navigation aids around coastal areas.

The Commissioners were formed as a body in 1786 by Act of Parliament largely at the urging of the lawyer and politician George Dempster (nicknamed 'Honest George'), to oversee the construction and operation of four lighthouses; at Kinnaird Head, North Ronaldsay, Scalpay and Mull of Kintyre, for which the Commissioners were empowered to borrow up to £1,200. The first president of the Board was the Lord Provost of Edinburgh, Sir James Hunter-Blair. Until this time, the only major lighthouse in Scottish waters was the coal brazier mounted on the Isle of May in the Firth of Forth together with some smaller lights in the approaches of the Tay and Clyde estuaries. None of the major sea passages around the coast, which led through dangerous narrows, were marked.

The Commissioners advertised for building estimates for the new lighthouses, but there were bids. They received an offer of help from Ezekiel Walker of King's Lynn who had developed a parabolic reflector for the Hunstanton Lighthouse[1] and sent Thomas Smith, who was making his name in street lighting in Edinburgh and had offered help, to England to learn from him. Smith soon returned and instructed an Edinburgh architect to prepare the plans for four lighthouses.

The £1,200 was spent before the first light at Kinnaird Head was finished and a further Act of Parliament was required which allowed them to receive half their dues before all the lights were finished. By the end of 1787 the first light had been installed. At the Mull of Kintyre everything had to be transported by pack horse from Campbeltown, 12 miles away, but it was lit by October 1788. To get to Scalpay in the Outer Hebrides and North Ronaldsay in Orkney needed boat trips across rough waters for Smith and Mills, the stonemason but all the same the job was completed by October 1789 to widespread praise. The dues which had originally been set at two shillings per ton of cargo in the seventeenth century were now reduced to one penny per ton.[2]

The Commissioners' most famous engineer was Robert Stevenson, whose sons David, Alan, and Thomas followed their father into the profession. The Stevenson dynasty built the majority of the Northern lights, in some exceptionally challenging locations. Their lights were some of the engineering masterpieces of their time, notably those at Bell Rock, Skerryvore and Muckle Flugga.

Between 1876 and 2005 the Northern Lighthouse Board also maintained foghorns at a number of locations. The last (at Skerryvore) was sounded for the last time on 4 October 2005.[3]

Ensign of the Northern Lighthouse Board

The Board is based at its Georgian headquarters building in George Street in the centre of Edinburgh, from where it remotely monitors its network. Technical operations are carried out from a base in Oban, Argyllshire, where there are maintenance workshops and facilities for the construction of buoys and beacons. The Northern Lighthouse Board's vessels are also based here. The Oban depot has been recently modernised.

The Board is directly accountable to the Secretary of State for Transport, though in practice, close co-operation is made with the autonomous authorities in Scotland and the Isle of Man. The Northern Lighthouse Board is funded by pooled light dues paid by tonnage by ships using British and Irish ports: the funds are administered by the Department of Transport and distributed to the Northern Lighthouse Board, Trinity House and the Commissioners of Irish Lights. 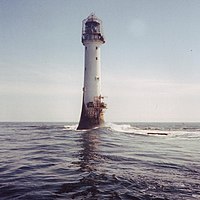 The Board operates the following:

The Board operates two lighthouse tenders, known by the prefix Northern Lighthouse Vessel, or NLV. NLV Pole Star' has been in service since 2000 and NLV Pharos was delivered on 31 March 2007 to the Oban depot.[4] This will be the tenth Pharos, replacing the ninth Pharos which was sold in September 2006 for use as a Fishery Protection vessel for South Georgia and the South Sandwich Islands. 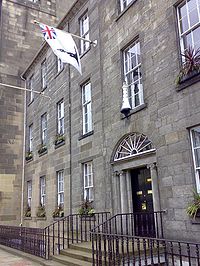 Most of the Commissioners have always been ex officio appointments. The original Commissioners appointed in 1786 were the Scottish law agents of the Crown, the Sheriffs of Scotland's coastal counties, and the Provosts and Lord Provosts of Scottish cities and towns with strong mercantile interests. Reform of local government and sherriffdoms have since resulted in changes.

The current Commissioners of Northern Lighthouses, as provided by the Merchant Shipping Act 1995, are the Lord Advocate and the Solicitor General for Scotland; the Lords Provost of Edinburgh, Glasgow and Aberdeen, the conveners of Highland Council and Argyll and Bute Council; the Sheriffs Principal of all the sheriffdoms in Scotland; a Manx representative nominated by the Lieutenant Governor of the Isle of Man and appointed by the Secretary of State; and up to five co-opted Commissioners.

The Board HQ flies the Commissioner's flag, alongside the Saltire and the Isle of Man flag.[6]