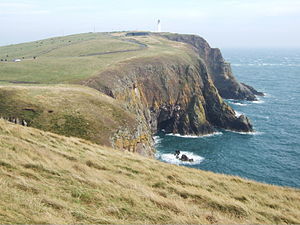 Lighthouse on the Mull of Galloway

A lighthouse stands at the point. Built in 1830 by engineer Robert Stevenson, the white-painted round tower is 85 feet high. The light is 325 feet above sea level and has a range of 28 nautical miles.[1]

During Second World War, a French member of the British Air Transport Auxiliary (ATA), Cladius Echallier, died by striking the Lighthouse in a Beaufighter, while making a low landfall from the Irish Sea.[2]

The Mull has one of the last remaining sections of natural coastal habitat on the Galloway coast and as such supports a wide variety of plant and animal species. It is now a nature reserve managed by the RSPB.

The lighthouse is now automatic, and an old outhouse has been converted into a visitor centre, run by the South Rhins Community Development Trust, a group of local people and businesses. In the summer, the lighthouse is open by the Trust every weekend between 10:00 am and 4:00 pm; an additional day, Monday, is added to these opening times during July and August. There is a minimal charge for entry. In 2004 a new café was built at the Mull of Galloway, called the "Gallie Craig". Its design incorporates into the landscape with a turf roof, giving views across to Ulster and south to the Isle of Man.