The Isle of May is a fair island in the mouth of the Firth of Forth, five miles off the coast of Fife, to which it belongs. It forms the easternmost part of the county.

The island is a mile long and about a quarter of a mile broad. There is a peninsula in the north, known as Rona, which is almost a separate island.

The island is owned and managed by Scottish Natural Heritage as a National Nature Reserve.

Most visitors to the island are daytrippers taking the ferry from Anstruther in Fife, although up to six visitors can stay at the observatory,[1] usually for a week at a time. The only way to get there is by ferry, the journey taking 45 minutes from the small ports of Anstruther and Crail. The island is closed to visitors from 1 October until 1 May to prevent disturbance to the large number of seal pups.

The Scottish Seabird Centre at North Berwick has three live cameras on the island, which can be remotely controlled by visitors at the Seabird Centre, to allow close viewing of the seabird cities in spring and summer, including puffins, guillemots, razorbills, shags, cormorants and terns and the fluffy grey seal pups in winter, without disturbing the animals.

There are now no permanent residents, but during the Middle Ages.the island was the site of a priory, named St Adrian's Priory.

No agreement is found on the origin of he name of the Isle of May. It named in the Orkneyinga Saga Old Norse as Máeyar, which might mean "Seagulls Island". An alternative, Gaelic origin would be from the word Magh meaning "plain". The names of most of the other islands in the Forth, such as Inchmickery, Inchcolm and Craigleith have Gaelic origins.

There are certainly names on the island from both languages, including "Tarbet" (tairbeart, an isthmus), "St Colme's Hole" (Colm Cille) and "Ardchattan" from Gaelic, and "Kirkhaven" which may refer a Norse original "Kirkshavn".

A folk etymology derives "May" from the Scots word meaning "maiden". Thenaw, mother of St Kentigern is said to have floated here in an oarless coracle and some writers have in a rather fanciful digression proposed a link with the Nine Maidens on Traprain Law in East Lothian.

The island's rock is "fine grained basalt of a dark-grey colour with tinges of green and greenstone."[2] 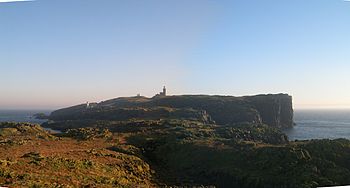 The Isle of May from the north horn

The island was the site of one of the earliest Christian churches in Scotland, founded in the 9th century and built into an unusual mass-burial mound that probably dates from prehistoric times. Although radiocarbon dating of bones reveal them to date from the 7th century to the 10th century, remains of Bronze Age funeral urns suggest that the mound may be older.

The current chapel on the site is dedicated to St Adrian of May, who was killed on the island by Danish invaders in 875.

The Orkneyinga saga records another Viking raid, by Sweyn Asleifsson, and Margad Grimsson, after they had been expelled from Orkney by Earl Rögnvald, that they went raiding on the eastern seaboard of Scotland:

They sailed south off Scotland until they came to Máeyar. There was a monastery, the head of which was an abbot, by name, Baldwin. Swein and his men were detained there seven nights by stress of bad weather. They said they had been sent by Earl Rögnvald to the King of Scots. The monks suspected their tale, and thinking they were pirates, sent to the mainland for men. When Swein and his comrades became aware of this, they went hastily aboard their ship, after having plundered much treasure from the monastery. They went along Myrkvifjörð [the Firth of Forth], and found David, the King of Scots, in Edinburgh. He received Swein well, and requested that he stay with him. He told the King explicitly the reason of his visit, how matters had gone between him and Earl Rögnvald before they parted, and also that they had plundered in Máeyar. Swein and Margad stayed for a while with the King of Scots, and were well treated. King David sent men to those who had been robbed by Swein, and told them to estimate their loss themselves, and then of his own money, he made good to everyone his loss" (Orneyinga Saga, Chapter LXXVII)

There is however, no abbot recorded of the name Baldwin and there may be some conflation with St Baldred, who is connected with the nearby Bass Rock, and St Baldred's Boat off Dunbar.

Another possible mention of the island is under the name "Mosey". This may be a conflation with Mousa since it comes close to a mention of "Moseyjarborg" (the Broch of Mousa), or a mistranscription of "Maey" in the old script. It is also suspiciously similar to the previous extract.

They put into Mosey, and Swein sent men to Eidinaborg [Edinburgh], to tell the King of Scots of their plunder.

The original church was expanded during the 12th century by David I of Scotland, under the aegis of Reading Abbey which had been founded by his brother-in-law, Henry I of England. The monks agreed to maintain nine priests on the island to pray for the souls of the Kings of Scots.

The island, with the supposed relics of Saint Ethernan who died there in around 669, was a popular destination for pilgrims during the later Middle Ages. Evidence that it was already an important place for pilgrimage in the 12th century include the remains of a ten seater communal latrine, much larger than necessary for an abbey with only nine or ten monks. Bishop Wishart of St Andrews bought the priory in the middle of the 13th century, although there was an attempt to overturn this and the dispute rumbled on for about fifty years. The priory was finally transferred to the Canons of St Andrews in 1318, and was relocated at Pittenweem.

The Prior of Pittenweem passed the island to Patrick Learmonth of Dairsie, Provost of St Andrews in 1549. He sold it to Balfour of Manquhany in 1551, who in turn passed it on to Forret of Fyngask seven years later, who sold it to Allan Lamont, who in turn sold it to it to John Cunningham (or Cunynghame) of Barnes (in Fife) who was responsible for the first lighthouse beacon on the island.

The so-called Battle of May Island took place nearby on the night of 31 January 1918, in the last year of the First World War. A sequence of accidental collisions between Royal Navy warships occurred over little more than an hour which saw two submarines sunk with heavy loss of life, another four damaged along with a light cruiser.

The Navy maintained a control centre on the island for indicator loops and six ASDIC units laid on the seabed to detect U-boats and enemy surface vessels trying to enter the Forth from shortly before the Second World War until 1946.

Since 1956 the isle has been dedicated as a National Nature Reserve[3] and managed by the Nature Conservancy Council, now Scottish Natural Heritage, although until 1989 it was actually owned by the Northern Lighthouse Board.

A coal-fired beacon was established in 1635[4] (or 1636[5]) by James Maxwell of Innerwick, and John and Alexander Cunningham, who charged shipping a tonnage-based fee. This was originally 2 Scottish shillings per ton for Scottish ships (equivalent to two pence sterling) and twice this amount for non-local shipping per voyage, but was reduced to 1 shilling and sixpence, and three shillings respectively in 1639 with some shipping entirely exempt during the summer.

The beacon, the first permanently manned one in Scotland and considered at the time to be one of the best in existence, used around 400 tons of coal per year, requiring three men to look after it.

One of the three lightkeepers, his wife and five of his six children were suffocated by fumes in January 1791, the exception being a three-year-old girl who was discovered alive three days later. Ash and clinker had piled up beside the 40-foot beacon tower over the previous ten years and had reached the window of keepers' room, and was set smouldering by coals falling from the beacon.

The light was sometimes hard to recognise, for example HMS Nymphe a 36-gun fifth rate and HMS Pallas were wrecked near Dunbar on the night of 19 December 1810 because their navigators had mistaken a lime kiln on the mainland coast for the beacon.

The Northern Lighthouse Board purchased the island in 1814 from the Duke and Duchess of Portland for 60,000 pounds, by which time the beacon was the last remaining private lighthouse in Scotland. A proper lighthouse was built on the island in 1816 by Robert Stevenson. and is an ornate gothic tower on a castellated stone building designed to resemble a castle, 80 feet high and with accommodation for three light keepers and their families, along with additional space for visiting officials. The new lighthouse started operating on 1 September 1816, and is now a listed building.

It was upgraded in September 1836, when a new light and refractor lens was fitted, and further extensive work took place in 1885–1886. Additional dwellings, boiler and engine houses, a workshop and a coal store were built 250 yards from the lighthouse in a small valley containing a fresh water loch. The engine house was fitted with two steam-powered generators, at 4.5 tons each the largest ever constructed at that time, and with a total output of 8.8 kW. These powered an arc lamp in the lighthouse, with a three-wick paraffin lamp kept lit but turned down in case the electric lamp failed. The new light was first used on 1 December 1886 and produced four flashes every 30 seconds.

The high cost of the coal, around 150 tons a year, along with improvements in oil lights led to the replacement with an incandescent mantle in 1924.

Another smaller lighthouse, the Low Light was constructed a few hundred yards from the main light in 1843 to provide (with the main lighthouse) a pair of lights which would become aligned to help ships avoid the North Carr Rock 7 miles to the north of the island off Fife Ness. It was first used in April 1844, but is no longer used, having been made redundant by the establishment of the North Carr Lightship in 1887 and the building is now used for bird watching.

In 1930 two keepers rescued four crew members of the wrecked commercial trawler George Aunger by swimming out to it. The lighthouse became a "rock" station on 9 August 1972, meaning that the keeper's families were no longer accommodated at the lighthouse but on the mainland, and a fully automatic one on 31 March 1989 shortly before ownership of the island passed to the Nature Conservancy Council. It is now monitored and controlled by way of a UHF radio link to Fife Ness Lighthouse and then by landline to the Northern Lighthouse Board headquarters in Edinburgh.

The modern light produces two white flashes every 15 seconds, and has a range of 22 nautical miles in good visibility. 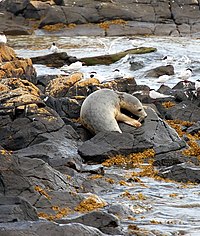 Grey seal on the Isle of May

Because it is an important breeding site for seabirds and seals, the island is protected as part of the Forth Islands Special Protection Area.

During the height of the breeding season, over 200,000 seabirds[6] of 14 species[7] nest on the island, including Puffins, Black-legged Kittiwakes, Razorbills, Guillemots, Shags, Fulmars, Oystercatchers, Eider ducks, and various species of Tern and Gull.

Both Harbour Seals and Grey Seals can be seen on the island all year round, and whales are occasionally sighted in the summer[7].