The Stoer Head Lighthouse stand on Stoer Head, a point of land north of Lochinver and the township of Stoer in Sutherland. The lighthouse on the point marks the northern entrance to the Minch.[1]

Around 10,000 visitors visit the lighthouse each year, necessitating the construction of a public toilet in 2013.[2] The two keepers' cottages have are now holiday homes.[3][4]

Stoer Head Lighthouse was built on Stoer Head by brothers David and Thomas Stevenson in 1870 after being identified as one of forty-five sites in Scotland where a lighthouse was necessary to protect shipping.[5] The lighthouse is just 45 feet high, making it squat in appearance, but the height of the cliffs on which it sits means it can be seen at a distance of 24 miles out at sea.[3] The beacon flashes four white every fifteen seconds.[3]

Close to the jetty is the Stoer Lighthouse Stores bothy which was used by the men building the lighthouse.[6] In the bothy there is a mural depicting the east elevation of the Stoer lighthouse: the mural probably dates from the 1800s, certainly predating the sale of the bothy in the 1960s. The neighbouring (inland) bothy is known as the Salmon Bothy and was used to store salmon. 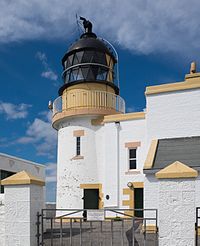 The lighthouse was manned by a Principal Lighthouse Keeper and Assistant until 1978, when it was automated.[5] The remoteness of the assignment necessitated a degree of self-sufficiency, and there is ample evidence of their occupation, with the remains of the former byre, stable, cow shed, pig house and cart shed still visible nearby.[5] The children were educated at the local school at Stoer for their primary education, but had to move to a boarding school for their senior studies as there was no senior school in all of Sutherland.[5]

The lighting is now provided by an array of sealed beam electric lamps, operated by a sensor to automatically turn them on and off at specified light levels.[5] Upkeep is carried out by a local who visits on a regular basis to carry out basic maintenance and cleaning, and technicians from the Northern Lighthouse Board who visit on an annual basis.[5]