North Ronaldsay is the northernmost of the Orkney Islands and with an area of 2.7 square miles is the fourteenth largest.

North Ronaldsay lies around 2½ miles north of its nearest neighbour, Sanday. The island is around 3 miles long along its length and is defined by two large sandy bays; Linklet Bay on the eastern shoreline and South Bay at the south. The west of the island is very rocky with many skerries. Low lying and exposed, the island's climate is extremely changeable and frequently inclement. The surrounding waters are stormy and treacherous, and have been a notorious 'graveyard' for ships (hence the unusually early provision of a lighthouse on the island).

Hollandstoun at the south of the island is the most sizable village, lying roughly equidistant from the airfield and the pier. The island is also home to a bird observatory.

North Ronaldsay has a unique dry stane dyke that surrounds the island whose purpose is to keep the seaweed-eating North Ronaldsay sheep off the arable land.

The island's name, like those of most of the islands of Orkney, is from Old Norse Rínansey or Rínarsey, which may mean "Ronan's Island". It is "North" to distinguish it from the coincidentally named South Ronaldsay.

Hálfdan and Gudrød were sons of King Harald Finehair of Norway. They trapped Rögnvald in his house and set it alight but their father, King Harald was appalled by his sons' actions, overthrew Gudrød and restored Rögnvald's lands to his son, Thorir Rögnvaldarson, while Hálfdan fled westwards to Orkney and displaced Torf-Einarr. From a base in Caithness, Torf-Einarr resisted Hálfdan's occupation of the islands. After a battle at sea, and a ruthless campaign on land, Torf-Einarr spied Hálfdan hiding on North Ronaldsay.

The sagas claim that Hálfdan was captured, and sacrificed to Odin as a blood-eagle.[1][2]

Holland House was built in more peaceful times, in 1727.

In 1789 the Old Beacon was built; the third lighthouse to be built by Thomas Smith for the Commissioners of the Northern Lights.

Flights link the island with Kirkwall on Mainland, as does a weekly ferry operated by Orkney Ferries. 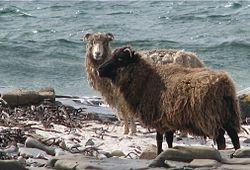 The main industries on the island are crofting and sheep farming, where unique North Ronaldsay sheep are largely farmed collectively. Tourism also plays an important role.

The island has a population of 60, roughly half of whom are descended from native islanders and half are new islanders, who have come to live there. There is great interest in attracting new families with young children in order to keep the school open, since that is vital for the economy.

Established in 1987, the observatory's main purpose is to conduct long-term monitoring of bird populations and migration. North Ronaldsay is well-known as one of the best bird watching sites in the country during the Spring and Autumn migration periods. The quantity and variety of birds that can be seen at these times is often spectacular.

Dennis Head in the northeast of the island is home to an historic lighthouse known as the Old Beacon. The light was first established in 1789 by Thomas Smith. It was to be the first of many island lighthouses for Smith (he had previously worked on the lights at Kinnaird Head and Mull of Kintyre). Smith received assistance with the North Ronaldsay light from Ezekiel Walker and from his stepson Robert Stevenson.

In 1809 with the construction of other nearby lighthouses it was decided that the North Ronaldsay light was no longer required and it was extinguished. The round stone tower was retained as a sea-mark, however, and the original beacon chamber at the top replaced by a vaulted roof capped by a remarkable ball finial. The stone spiral staircase which once led to the beacon was demolished. The original keepers' houses, roofless but largely complete, survive below the tower. In 2006, it was one of the neglected buildings selected for the Restoration television series.

A new lighthouse was built nearby just 43 years later in 1852. The modern lighthouse lies at the north of the island at Point of Sinsoss and can boast of being Britain's tallest land-based lighthouse tower.