North Rona is a remote island in the North Atlantic belonging to Ross-shire and the most northerly point of the county. Its original name is Rona but it is called North Rona more frequently, to distinguish it from South Rona, another small island, in the Inner Hebrides. North Rona has an area of 269 acres and a maximum height of 354 feet.

The island lies 44 miles north-north-east of Butt of Lewis and 11 miles east of Sula Sgeir. More isolated than St Kilda, it is the remotest island in the British Isles ever to have been inhabited on a long-term basis. It is also the closest neighbour to the Faroe Islands. Due to the island's remote location and small area, it is left off many maps of the United Kingdom. 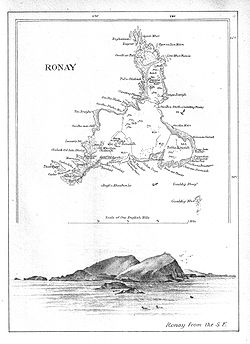 Rona is said to have been the residence of Saint Ronan in the eighth century. The island continued to be inhabited until the entire population of thirty died shortly after 1685 after an infestation by rats, probably the Black Rat Rattus rattus, which reached the island after a shipwreck. The rats raided the food stocks of barley meal and it is possible the inhabitants starved to death, although plague may have been a contributory factor. This occurred in a year in which it is reported that no further ships reached the isolated island to supply or trade. The rats themselves eventually starved to death, the huge swells the island experiences preventing their hunting along the rocky shores.[1]

The isle was resettled, but again depopulated by around 1695 in some sort of boating tragedy, after which it remained home to a succession of shepherds and their families, until 1844 when it was deserted. Sir James Matheson, who bought Lewis in 1844, offered the island to the Government for use as a penal settlement. The offer was refused.

Although farmers from Lewis have continued to graze sheep on Rona ever since, the island has remained uninhabited, apart from one brief and tragic episode in 1884–85. In June 1884, two men from Lewis, Malcolm MacDonald and Murdo Mackay, having reportedly had a dispute with the minister of their local church, went to stay on Rona to look after the sheep. In August, boatmen who had called at the island reported that the men were well and in good spirits, and had refused offers to take them back to Lewis. In April 1885, the next people to visit Rona made a grim discovery: the bodies of the two men from Lewis, who, a post-mortem subsequently showed, had fallen ill and died during the winter.

During First World War, the commander of German U-boat U-90, Walter Remy, stopped his submarine at North Rona during each of his wartime patrols, weather permitting, and sent crewmen onto the island to shoot sheep to obtain mutton for on-board consumption.[2]

The island was occupied temporarily in 1938–39 by author and conservationist Frank Fraser Darling with his wife Bobbie and their son Alasdair, while they studied the Grey Seals and the breeding seabirds.

The island still has the Celtic ruins of St Ronan's Chapel. It is owned by Scottish Natural Heritage, and managed as a nature reserve, for its important grey seal and seabird colonies. These include the European Storm-petrel and the larger Leach's Storm-petrel, for which North Rona is an important breeding locality. Rona and Sula Sgeir form the most remote and least-visited National Nature Reserve in Britain.[3]

In Island at the edge of the world, the poet Kathleen Jamie describes a visit to the island.[4]

The island hosts an automatic light beacon, remotely monitored by the Northern Lighthouse Board.[5]