From Wikishire
(Redirected from Sanday, Orkney)
Jump to: navigation, search
Sanday is also the name of one of the Small Isles

Sanday is one of the inhabited islands of Orkney. Its area of 19½ square miles (12,461.5 acres) makes it is the third largest of the Orkney Islands. The main centres of population are Lady Village and Kettletoft. Sanday can be reached by Orkney Ferries or aeroplane from Kirkwall on Mainland. Cultural activities revolve around the school.

Sanday, so called because of its sandy beaches, is thought to have been mostly underwater at some periods of prehistory. Archaeological evidence suggests that it at one time consisted of several smaller islands which joined together when the sea level decreased. There is a similarly named island, Sandøy, in the Faroe Islands.

The island has large sand dunes where seals and otters can be found. Inland it is fertile and agricultural and there is some commercial lobster fishing. The underlying geology is predominantly Devonian sediments of the Rousay flagstone group with Eday sandstone in the south east.[1] 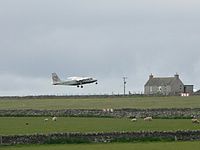 Islander taking off from Sanday

The novelist Eric Linklater described Sanday's shape seen from the air as being like that of a giant fossilised bat.

There are several SSSIs on Sanday and the marine coast around the east of the island is designated a Special Protection Area due to presence of sand dune and machair habitats, rare outside the Hebrides, as well as extensive intertidal flats and saltmarsh.[2]

Aerial view of the east coast of Sanday

A number of sites of historical interest are found on the island, including the Quoyness chambered cairn, dating from the 3rd millennium BC.

A large man-made mound at Pool was excavated in the 1980s. This indicated a Neolithic structure made of turf or burnt peat, a later pre-Viking sub-circular structure with pavings and cells, and a Viking stone and turf rectangular building dated to the late 8th or early 9th century. Various implements were also discovered including pre-Norse hipped pins and pottery from both the pre-Viking and Norse periods. A predominance of fish and animal bones suggests the site was used for meat processing.[1]

At the ruined Kirk of Lady, near Overbister, are the Devil's Fingermarks, a petrosomatoglyph, incised as parallel grooves into the parapet of the kirk.

Sanday also once boasted the most northerly passenger railway in the United Kingdom, Sanday Light Railway. 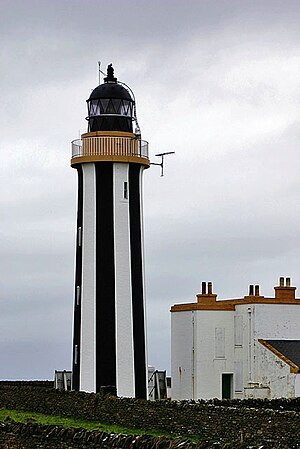 Start Point lighthouse on Sanday was completed on 2 October 1806 by engineer Robert Stevenson. It was the first northern lighthouse to have a revolving light and since 1915 has exhibited distinctive black and white vertical stripes which are unique. The light was automated in 1962 and is powered by a bank of 36 solar panels.[4]

Despite the presence of the lighthouse, HMS Goldfinch was wrecked in fog on Start Point in 1915.[5]

Sanday has two golf courses: a 9 hole links course of 2,600 yards run by Sanday Golf Club and the one-hole meadowland "Peedie Golf Course" of 57 yards (believed to be Scotland's shortest) at West Manse.[6]

In 2004, three wind turbines with an installed capacity of 8.25 Megawatts were erected by Scottish and Southern Energy (SSE) at Spurness.[7][8] Sanday Community Council successfully negotiated a wind farm community fund with SSE which will be benefitting the people of the island for the lifetime of the turbines, anticipated to be 20 to 25 years.[9]

create an economically prosperous, sustainable community that is connected with the wider world, but remains a safe, clean environment, where we are proud to live, able to work, to bring up and educate our children, to fulfill our own hopes and ambitions, and to grow old gracefully, enjoying a quality of life that is second to none.

Current projects include the establishment of a sports hall and youth centre, the creation of a local sound archive, and a countryside ranger service.[10] With the help of funding from HICEC, the Trust have purchased a weather station, including a wind-logger. Initially located in the grounds of Sanday School, the wind-logger will be placed in various positions around the island for a month at a time to compare differences in wind speed with those recorded at the school.[11]

A district tartan has been designed for Sanday by one of the island's residents, although it has not yet been officially adopted by the island authorities. It represents the sea, the distinctive sandy beaches and green meadows of the island, and the vertical stripes of Start Point lighthouse.[12]

In July 2008 a concert held on the island was the culmination of an innovative musical project. The main aim of project is to set up a music-teacher training programme that will provide additional music tuition in the school and throughout the community.