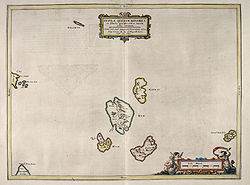 The Small Isles are a small archipelago of islands forming a parish in the Inner Hebrides, off the west coast of Scotland. They lie south of the Isle of Skye and north of Mull and Ardnamurchan – the most westerly point of mainland Great Britain. The Gaelic name, Na h-Eileanan Tarsainn literally means "cross isles" referring to their position between Morar and the Uists.

The four main islands are Canna, Rùm, Eigg and Muck. The largest is Rùm (or Rhum) with an area of 40 square miles.

A distant view of Eigg, with the hills of Rùm behind

The Small Isles together form one of 40 National Scenic Areas in Scotland.[1]