Rousay is a small, hilly island of Orkney lying two miles north of Mainland. Its name is from Old Norse and means "Rolf's Island".

Rousay has been nicknamed "the Egypt of the north", due to its tremendous archaeological importance.

The island is separated from Mainland by the Eynhallow Sound, and, like its neighbours Egilsay and Wyre, Rousay can be reached by a roll-on-roll-off ferry from Tingwall on Mainland, the crossing taking 20–25 minutes. The service is operated by Orkney Ferries, and can take up to 95 passengers (reduced to 50 in winter), and 10 cars. The ferry links the islands of Rousay, Egilsay, and Wyre with each other, and with the mainland of Orkney.[1]

In the 2001 census, Rousay had a population of 212 people. Most employment opportunities are in farming, fishing or fish-farming; there are also craft businesses and some seasonal tourism-related work. There is one circular road round the island, some 14 miles long, and most arable land lies in the few hundred yards between this and the coastline. With an area of about 19 square miles, Rousay is the fifth-largest of the Orkney Islands.

Rousay is a 'Site of Special Scientific Interest' with notable cliff formations and wildflower colonies, and has an RSPB bird reserve. It is the hilliest Orkney island after Hoy, and offers good views of neighbouring islands from Blotchnifiold at 817 feet, and Keirfea or Knitchen (both over 750 feet high).

Summertime brings visitors drawn by its natural beauty and wildlife, including Rousay's seals and otters, and by its archaeological remains, especially the cluster of important sites connected by a footpath near the western shore.

The island has evidence from every stage in the history of Orkney, with a Neolithic settlement at Rinyo, Bronze Age burnt mounds, Iron Age crannogs and brochs (the highest density anywhere in Scotland: three within 550 yards of the coast), Viking boat burials, remains of a medieval church and the stately home at Trumland.

Over 100 archaeological sites have been identified, but only a small fraction of them have been excavated and researched. The best known and most spectacular of the island's archaeological sites is the complex of Midhowe broch and Midhowe Chambered Cairn. Blackhammer Chambered Cairn, Taversoe Tuick, and Yarso are also important tombs on the island.

Rousay placenames reflect its Norse heritage. 'Hrólfs-øy' or 'Hrolfsey' was based on the male name 'Hrolf' (Rolf). Hugh Marwick's work has shown the name developing from 'Rollesay' in the 14th century, through 'Rolsay' in the 15th, and 'Rowsay' in the early 16th, with the spelling 'Rousay' first recorded in 1549.[2] 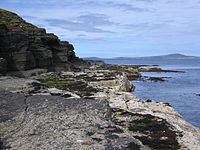 Most Rousay people have always earned their living from farming and/or fishing. In the 19th century, records show there were also tradespeople supplying the needs of a rural community: blacksmiths and joiners, cobblers and shopkeepers, with women doing dressmaking and straw plaiting. Throughout the century, Rousay's landlords demanded high rents from crofters, many of whom were made homeless in a series of clearances along the western coast, ordered by landowner George William Traill in the 1820s and 1830s.

Rousay's population in the mid-19th century was over 900, but emigration following land clearances reduced that to 627 by 1900, and half a century later it had fallen to 342. Depopulation accelerated, and in the next twenty years the number fell to 181, its lowest ever. From the 1970s onward new families started to settle on Rousay: most came from the south, especially from England. The population is now over 200.

There is a local primary school,[3] which provides education for boys and girls aged 3 to 12, and has a school roll of 19. Once a child completes his/her primary education, they must then move up to secondary school. Kirkwall Grammar School, or 'KGS', in Kirkwall is the usual school, however, in recent years, Stromness Academy in Stromness, has been the secondary school of choice for many of the pupils.

Many of the pupils, both at primary and secondary, are entitled to school transport on the island, which is free to the pupils.

The poet Pauline Stainer spent several years on the island, and in 1999 published a collection of her poems about Rousay, Parable Island.

The astronomer,[4] musician and writer, John Vetterlein first came to Rousay in 1970[5] and has lived on the island full-time since 1995. He established the small publishing house Spring Ast LIX in 1997, whose publications include: Braes Woodland Diary - the First Ten Years by Ann Chapman.[6]