Swona is an uninhabited island in the Pentland Firth off the north coast of Caithness.

Swona is the more northerly of two islands in the Pentland Firth between the Orkney Islands and mainland Caithness; Swona belongs to Orkney while its neighbour, Stroma, belongs to Caithness. Swona lies in the southern approach to Scapa Flow, west of South Ronaldsay.

Situated in the tidal stream of the Pentland Firth, a tidal race tears across both the north and south ends of the island, being minimal briefly at the turn of the tide. Between the races is a calm eddy which extends down-tide as the tide strengthens. The races are highly visible, with over-falls and whirlpools. Large swell waves can also be present, especially in bad weather conditions. When entering or leaving the eddies crossing the races, even large powerful vessels can be pushed off course, such is the demarcation between the relatively calm eddy and the fast-moving tide in the races.

Swona is about 1¼ miles long by about ½ mile wide, with an area of 227 acres. It rises no higher than 135 feet, at Warbister Hill. The island is made up of old red sandstone which stands in low cliffs on the east coast.

There is no regular access to the island, but the ferry from Gills Bay, near John o' Groats, to St Margaret's Hope usually passes close to the island, dependent on the tidal direction at the time, giving fine views.

Swona is owned by two Orkney farmers, but not worked due to difficulty of access. It is a Site of Special Scientific Interest conservation area and home to a number of rare plants. 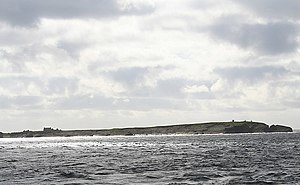 Approaching the north head of Swona

The island takes its name from Old Norse Svíney or Swefney, meaning either "Swine Isle" or "Sweyn’s Isle".[1] There is a similarly named island, Svínoy, in the Faroe Islands.

Prehistoric, pre-Norse and Norse remains are found on the island.[2] and the remains of a more recent crofting settlement. A herd of feral cattle remains from the days when the island was inhabited. The island was populated from around 500 BC until 1974.

Boats were built on the island for a number of years. The last of these, the Hood can be seen pulled well up the shingle beach by the landing stage. It is no longer seaworthy, as it has a hole in the hull, caused by the feral cows' using it as a rubbing post. The landing stage and boat can be seen briefly in passing through a gap in the rocks near the north end of the island on the east side. The last house to be occupied can also be seen in this area.

The island was the site of many shipwrecks caused by the strong currents in the Pentland Firth. In 1931, a 6,000 ton Danish freighter called Pennsylvania was wrecked on the island. The Orkney newspaper of the time said that it was one of the most richly-laden ships that was ever wrecked in the area. After some salvaging, the wreck was finally bought by a syndicate of Stroma and Swona men.

The Swona Minor light was built in 1906 on the south west tip of Swona. It was originally a cast iron tower but was replaced by a reinforced concrete square tower sometime in the 1980s. The earlier Stroma Lighthouse was built in 1896 and stands at the northern end of Stroma island.

In summer 1973 Arthur Rosie left the island and died shortly afterwards. James and Violet Rosie, brother and sister, left in March 1974.[2] Of these last inhabitants, James died in 197, and Violet in 1984, in South Ronaldsay, never having returned to Swona.

Many of the island's houses, while in a state of dilapidation, are as they were left, with various possessions still to be seen where they were abandoned.

When the population departed they left a herd of beef cattle - eight cows and one bull (a Shorthorn – Aberdeen-Angus cross). Five generations later, in 2004, the herd which had turned feral was still going strong, and is now classified as a new breed.[3] It then consisted of ten bulls, four cows, and two calves. This appears to be around the maximum number that the island can support. Two calves are born each spring, although not all live to maturity. The herd gets no additional feed, although it is checked by a vet each year. The animals are self-selecting for hardiness, easy calving, and low-maintenance, feeding off the grass and seaweed. Having been separated from the mainland for so long, they are completely disease-free, and have reverted to wild behaviour. In the summer the main herd is usually in the centre of the island.