Flotta is a small island in Orkney, lying in Scapa Flow. The island is known for and dominated by its large oil terminal. It is linked by ferry to Houton on the Orkney Mainland and Lyness and Longhope on Hoy.

The island’s name is Norse, and means either “Flat Island” or “Float Island”.

At the opening of the 20th century, the island was a quiet rural community like many other small islands of Orkney, but its sheltered location led to three major upheavals in the island in that century. 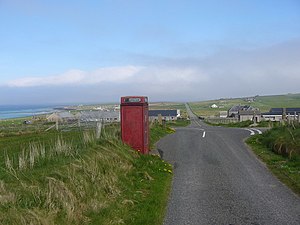 The settlement of Whome on Flotta

Until 1914, Flotta was a quiet farming community. In 1910, a population of 431 included two blacksmiths, four carpenters and three dressmakers. But everything changed with the arrival of the Royal Navy in Scapa Flow at the start of First World War. There is a photograph held by the Imperial War Museum in London that shows a boxing match taking place on Flotta in front of a wartime audience of 10,000 people.

During First World War, the island was home to a naval base. The dreadnought HMS Vanguard sank nearby in 1917, reputedly the worst maritime disaster in UK waters. In the Second World War, the island was again used as a military base. 1918 saw the mass exodus of Navy personnel, and 1939 saw their return. After the second world war the island had good piers and facilities, but a slowly declining population. It took until 1970 for fresh water to be piped to the island from Hoy.

In 1974, Occidental Petroleum started construction of the island's oil terminal. This became the second-largest major oil terminal serving the British sector of the North Sea, the largest being Sullom Voe in Shetland. It took only two years from the start of construction until the first of the crude oil was pumped into the terminal, during which thousands of workers were posted at the "camp" in Flotta to complete the facility as Britain's thirst for oil was growing by the day. It provides the landing for the Piper and Claymore fields pipeline system. In addition, it provides a safe facility for the receipt and trans-shipment of oil produced from the UK Atlantic margins.

The island has an approximate current population of 90 people. In June 2010, the island had to close the community primary school because there were no children of that age left on the island.