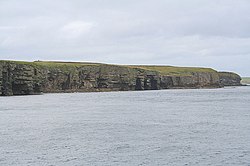 Helliar Holm is an uninhabited island off the coast of Shapinsay in Orkney. On it stabds a 42-foot lighthouse, which was built in 1893 and automated in 1967.[1] It is a tidal island that used to be connected to Shapinsay. It is still possible to walk across from the mainland during very low tides.

The island is owned by George and James Balfour-Kinnear.

The island also has the ruins of a broch, cairn and chapel.[2]