The Mainland is the main island of Orkney. Both of Orkney's burghs, Kirkwall and Stromness, lie on the island, which is also the heart of Orkney's ferry and air connections.

Seventy-five per cent of Orkney's population live on the island, which is more densely populated than the other islands of the county. The lengthy history of the island's occupation has provided numerous important archaeological sites and the sandstone bedrock provides a platform for fertile farmland. There is an abundance of wildlife, especially seabirds.

The name Mainland is a corruption of the Old Norse Meginland, meaning "mainland". Formerly the island was also known to the Norse as Hrossey meaning "Horse Island" and it is by this name that it appears in the Orkneyinga Saga.

The island is sometimes referred to as "Pomona" (or "Pomonia"), a name that stems from a sixteenth century mis-translation by George Buchanan and which has not been used locally but which is seen on some old maps.[1][2] Buchanan's coinage has given a name to the Pomona Inn at Finstown in the parish of Firth, and to a local café in the capital, Kirkwall. 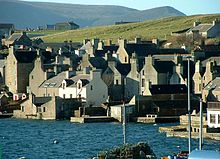 The three towns on Mainland are Kirkwall and Stromness, both of which are burghs, and Finstown.

Kirkwall, the capital of the islands, lies on a narrow strip of land between west Mainland and east Mainland, which historically enabled it to have access to both the southern and northern Orkney Islands. and also to Scapa Flow to the south, one of the world's great natural harbours. Kirkwall was also, until the abolition of episcopacy, the seat of the Bishop of Orkney, of whom St Magnus Cathedral was the seat. Kirkwall is also one of the island's ferry ports.

A long-established seaport that grew with the expansion of whaling, Stromness has a population of approximately 2,200 residents. The old town is clustered along the main street, flanked with houses and shops built from local stone, with narrow lanes and alleys branching off it. There is a ferry link from Stromness to Scrabster in Caithness and a ferry to the Isle of Hoy.

Finstown is the third largest place of the island, and used to be known as the "Toon o' Firth". The origin of its name is thought to be from an Irishman named David Phin who came to the area in 1811. It is on the main Stromness to Kirkwall road.

There are 13 parishes on the island: On the west coast:

In the centre (including Kirkwall):

Harray has the unique distinction of being the only landlocked parish in Orkney, although it too has a significant coast along the Loch of Harray, albeit a freshwater one.

The island is relatively densely populated and has much fertile farmland. The bulk of the Mainland is west of Kirkwall and is low-lying, with coastal cliffs to the north and west and two sizeable bodies of freshwater, the lochs of Stenness and Harray.

The eastern part of the Mainland is shaped like the letter "W", the easternmost peninsula being known as Deerness. To the south, causeways called Churchill Barriers connect the island to Burray and South Ronaldsay by way of Lamb Holm and Glims Holm.

Mainland effectively provides the core of the Orkney Islands, linking the northern members of the archipelago with the southern ones. At the east, and west ends, islands proceed to the north and south, somewhat in the shape of an "X". The western part of the island is part of the Hoy and West Mainland National Scenic Area, one of 40 in Scotland.[3] 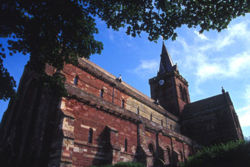 St Magnus Cathedral, built from the Old Red Sandstone prevalent on the island

In common with most of the Orkney isles, Mainland rests almost entirely on a bedrock of Old Red Sandstone, which is approximately 400 million years old and was laid down in the Devonian period. These thick deposits accumulated as earlier Silurian rocks, uplifted by the formation of Pangaea, eroded and then deposited into river deltas. The freshwater Orcadian Lake existed on the edges of these eroding mountains, stretching from Shetland to the southern Moray Firth.[4] As in nearby Caithness, these rocks rest upon the metamorphic rocks of the eastern schists, and in Mainland where a narrow strip is exposed between Stromness and Inganess, they are represented by grey gneiss and granite.

The Lower Old Red Sandstone is represented by well-bedded flagstones over most of the islands; in the south of Mainland these are faulted against an overlying series of massive red sandstones.

Many indications of glacial action exist in the form of striated surfaces in Kirkwall Bay, with boulder clay with marine shells, and many boulders of rocks foreign to the islands made of chalk, oolitic limestone, flint, &c. Local moraines are found in some of the valleys.

The soil generally is a sandy loam or a strong but friable clay, and very fertile. Large quantities of seaweed as well as lime and marl are available for manure. 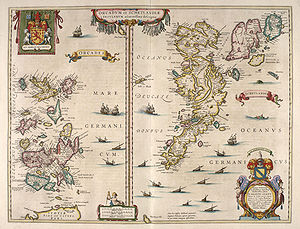 The other islands in the Orkney Islands are generally classified as north or south of the Mainland. The exceptions are the remote islets of Sule Skerry and Sule Stack, which lie 37 miles west of the archipelago, but are part of the county.

The Brough of Birsay is an island joined to Mainland by a natural causeway at low tide.

To the southwest, separated by a strait, is Hoy, the second-largest of the islands. To the southeast, Burray is joined to Mainland by the Churchill Barriers. To the north spread most of the islands, if the less populated ones, and ferries sail to them from Kirkwall. 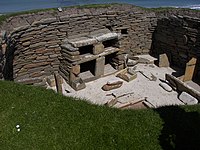 The western section of the island contains numerous Neolithic and Pictish constructions.

Most of the best known Neolithic ancient monuments are located in west Mainland, which includes the "Heart of Neolithic Orkney", a UNESCO World Heritage Site. This comprises the large chambered tomb of Maes Howe, the ceremonial stone circles the Standing Stones of Stenness and the Ring of Brodgar and the Neolithic village of Skara Brae, together with a number of unexcavated burial, ceremonial and settlement sites. The group constitutes a major prehistoric cultural landscape which gives a graphic depiction of life in the northern islands some 5,000 years ago. Nearby is the Barnhouse Settlement, a smaller cluster of prehistoric buildings.

Other sites of interest include St Magnus Cathedral and the ruin of the Bishop's Palace in Kirkwall, the Earl's Palace, a ruined 16th century castle in Birsay parish, and Skaill House, a merchant's house and museum near Skara Brae.

Scandinavian settlers comprehensively occupied Orkney, leaving no trace in the names or culture of the isles of any previous inhabitants. Thus Mainland became a possession of Norway and in due course of Denmark until the King of Denmark pawned the islands to the Crown of Scotland during the 15th century as part of a dowry settlement. The Norse legacy is widespread, and includes the site of a settlement at the Brough of Birsay, St Magnus Cathedral, almost all place names of the island, and runic inscriptions carved into ancient Maeshowe and at other ancient sites.

Stromness is of relatively recent origin, being first recorded as the site of an inn in the 16th century, although the name is of Norse origin. Stromness became important during the late 17th century, when England was at war with France and shipping was forced to avoid the English Channel. Ships of the Hudson's Bay Company were regular visitors, as were whaling fleets.

The Churchill Barriers are a series of four causeways with a total length of 1½ miles. They link the south of Mainland in the north to the island of South Ronaldsay by way of Burray and the two smaller islands of Lamb Holm and Glimps Holm. On 14 October 1939, the Royal Navy battleship HMS Royal Oak was sunk at her moorings within the natural harbour of Scapa Flow, by the German U-boat U-47 under the command of Günther Prien. U-47 had entered Scapa Flow through Holm Sound, one of several eastern entrances to Scapa Flow. To prevent further attacks, Winston Churchill ordered the construction of permanent barriers. They now serve as road links, carrying the A961. Work began in May 1940 and the barriers were completed in September 1944, but were not officially opened until 12 May 1945, four days after the end of Second First World Warn Europe.

Mainland contains the vast majority of the island's roads, and is also connected to those on the main south east islands, such as South Ronaldsay and Burray thanks to the Churchill Barriers.

There are ideas being discussed to build the Orkney Tunnel, an undersea tunnel between Orkney and mainland Great Britain, at a length of about 9 – 10 miles or (more likely) one connecting Orkney Mainland to Shapinsay.[5][6] The Orkney-Caithness route would make landfall on South Ronaldsay, if constructed and thence be connected to Mainland by way of the Churchill Barriers.

The main airport in Orkney is Kirkwall Airport from which aircraft fly south to Aberdeen, Edinburgh, Glasgow and Inverness, and north to Sumburgh Airport on Shetland and to the other islands or Orkney.

Ferries serve both to link Orkney to Great Britain, and also to link together the various islands of Orkney. Ferry services out of Orkney from Mainland include:

Two services also connect Caithness, with South Ronaldsay, which is in turn connected to Mainland by road.

Inter-island ferry services connect all the inhabited islands to Orkney Mainland, and are operated by Orkney Ferries, a company owned by Orkney Islands Council. 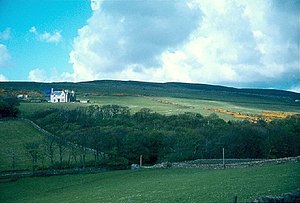 A rare wood, at Finstown

Most of Mainland, in common with the rest of Orkney, is treeless. Nevertheless, small woods are found at Kirkwall, Finstown and elsewhere.

Mainland has a great deal of marine life surrounding it, especially seabirds. Corncrakes can also be found in some parts.

There are few wild land mammals although there is an endemic sub-species of the Common Vole, the Orkney Vole or Cuttick, (Microtus arvalis orcadensis) found only in the Orkney archipelago. It may have been introduced by early settlers circa 4,000 years ago.[7] Brown hares and rabbits can be found and there are frogs, but no toads.

There are six hundred recorded species of plant on the Orkney Mainland. Two rarities to be found here are the oyster plant (Mertensia maritima) and the Scottish Primrose (Primula scotica). The latter is endemic to the north coast of Britain, including Orkney and nearby Caithness. It is closely related to the Arctic species Primula stricta and Primula scandinavica.[8][9]