Westray is one of the islands of Orkney. It has a population of around 550 people and its main village is Pierowall. Its name is from Old Norse, and means simply "Western Island".

At Pierowall is a heritage centre and the ruins of the Lady Kirk. Ferries to Papa Westray sail from here.

With an area of 18.2 square miles, it is the sixth-largest of the Orkney islands. The underlying geology is Rousay type Middle Old Red Sandstone, the flagstones of which make excellent building materials. There is very little peat and the soil is noted for its fertility.[1]

At the time of the earliest known settlements, c. 3500 BC, in Westray and neighbouring Papa Westray, it is believed that the two islands were joined.[2] A Neolithic and Bronze Age site at the Links of Noltland is in the care of Historic Scotland.[3] Collins Encyclopedia of Scotland says that "A larger settlement at Noltland on Westray is less well preserved" than the one on neighbouring Papa Westray.[2]

The Westray Wife is a 4 cm carved Neolithic figurine discovered there during a dig there in the summer of 2009.[4] It is the only Neolithic carving of a human form archaeologists have found in Scotland to date, and is the earliest depiction of a face found in the United Kingdom.[5] In 2010 some local businesses reported a 45% increase in turnover since the discovery of the figurine.[6]

Westray constituted a major family estate during the saga period.[2]

And it was at Noltland on Westray too, that one of the most impressive castles in Orkney was built, Noltland Castle.[7] The castle was commissioned in the 1560s by Gilbert Balfour, who probably played the leading role in the murder of Lord Darnley, consort of Mary, Queen of Scots. Balfour married Margaret Bothwell, the sister of Adam Bothwell, Bishop of Orkney who endowed him with Westray, when it was episcopal property. The Castle is situated above the Bay of Pierowall, was built in the 1560s. It is notable for an unusually large spiral staircase, "second only to Fyvie Castle, while its triple tiers of gunloops are without parallel in Scotland, if not Europe".[2] However, Balfour was executed by the Swedes before he could use it.

Other attractions include the Romanesque Cross Kirk and the Castle O'Burrian sea stack once used as a hermitage. 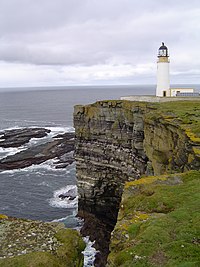 Flights leave the island's Westray Airport at Aikerness for Kirkwall on the Orkney Mainland, and to Papa Westray (known as Papay locally); the world's shortest scheduled flight (two minutes). The main ferry terminal is at Rapness with regular sailings to Kirkwall.

The island's main industries are fishing, fish farming and cattle farming. Tourism is also important to the island economy. The Westray Development Trust is well-known for its renewable energy and recycling initiatives and plans to make the island self-sufficient in energy by 2012.[9] A 900 kW community-owned wind turbine was erected in October 2009, the third large-scale such project in Scotland. "When the community realised it was their turbine, not someone else's, there was no objection," stated Alasdair McVicar of Westray Renewable Energy.[10]

The spectacular sea cliffs around Noup Head are home to thousands of seabirds including 60,000 Common Guillemot and Black-legged Kittiwake, 30,000 Razorbill and numerous Atlantic Puffin and Black Guillemot.[1] During the 1990s the Black Rat (Rattus rattus) may have been present[11] although they have not been recorded since. Mice, and the Orkney Vole are present however, as are otters.[1]