Egilsay is an island of Orkney, lying to the east of Rousay, north of Mainland. The island is largely farmland.

In the centre of the island is the romantic, abandoned church of St Magnus, on the site of his death. Around stretches farmland out to the island's rocky shores, where seals bask. The isle is known too for its corncrakes.

The church itself has a highly unusual Irish style round tower, which itself is extremely rare in Scotland, and is unique in Orkney (though other examples are known to have existed in the past). The building is roofless and the tower has been slightly truncated, but it is otherwise complete. It is maintained by Historic Scotland as an Ancient Monument and Category A listed building.

Egilsay was the place where Magnus Erlendsson, Earl of Orkney, Saint Magnus, was killed in 1117 by an axe blow to the head. While the church is dedicated to him, the foundation may be far older. For hundreds of years the story of St Magnus, part of the Orkneyinga saga, was considered just a legend until a skull with a large crack in it, such as it had been stricken by an axe, was found in the walls of St Magnus Cathedral in Kirkwall. 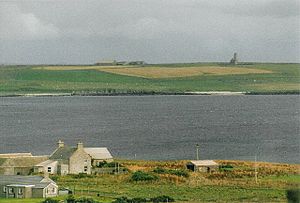 Egilsay seen from Rousay with St Magnus Church on the skyline

The island's name appears to mean "Egil's island"; Egil being a common Norse personal name. However it has been suggested that Egilsay may have a partly Gaelic name, which would be extremely rare for any place-name in Orkney.[1][2] The suggestion is that the name is from the Gaelic eaglais or and earlier Pictish "eccles" meaning church, as the island is dominated by a church of pre-Norse foundation. The island of Kili Holm just to the north, may represent cille, a monastic cell, a word perhaps brought into the local Norn language from the Gaelic-speaking islands to the southwest.

Orkney Ferries sail from the island to Tingwall on the Mainland, Orkney by way of Wyre and Rousay. 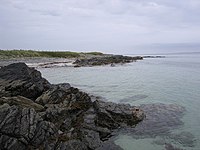