Eday is an island of Orkney, lying in the sea about 15 miles north of Mainland. With an area of about 10½ square miles, Eday is the ninth largest of the Orkney islands.

Names on the island

"Eday" is a name derived from the Old Norse eið, meaning "isthmus", and thus "Isthmus Island".[1][2] This is a name specifically associated with economic activity used only where the isthmus has been a "route for the movement of goods and/or boats from one coast to another".[3]

Other eið names in Orkney include Hoxa (Haugeið) on South Ronaldsay, Aith (found on Walls, Stronsay and the west Mainland) and Scapa in St Ola which is derived from the Norse Skálpeið.[4] Bay of Doomy, near the central isthmus on Eday, may also have a name derived from dómr-eið, meaning "isthmus of the courthouse", indicating it could have been an important meeting place during the Norse period.[2]

In common with elsewhere in Orkney, place names generally are a mixture of Norse, Scots and English influences. The common suffix -quoy is from the Old Norse kví-ló and signifies an enclosure in a marshy area.[6] Skaill on the east coast is from the Norse skáli and suggests an important farm on good fertile land that was associated with several smaller tunships.[7] The name "geo", which occurs frequently around the rocky coast, is from the Norse gjá and means a gully or a narrow and deep cleft in the face of a cliff.[8]

Bay of London from the east, with Rousay behind

Eday is 8½ miles long from north to south but only just over 550 yards wide at the narrow neck of land between the Sands of Doomy and Bay of London and has been described as being "nipped at the waist".[9] The centre of the island is largely moorland covered with heather, and cultivation is confined to the coasts.[10]

The highest points are Flaughton Hill at the island's centre, Fersness Hill at West Side, Vinquoy Hill to the north and Ward Hill to the south, which reaches 331 feet. In Orkney this is a common name for the highest point on an island as in the past they were used for the lighting of warning beacons.[11]

The largest body of fresh water is Mill Loch, south east of Vinquoy Hill. Loch of Doomy lies on the western side of the narrow "waist" and the smaller Loch Carrick on the north coast.

The population is dispersed along the coastal farmsteads nowhere on the island can be called as much as a village a village. Calfsound is the most thickly settled place, with other concentrations at Millbounds on the east coast, which has a post office and a community facility in a converted chapel, and Backaland in the south where the ferry from Mainland docks.

Sandstone at Red Head at the north end of Eday

Eday is surrounded by other small islands that make up the "seemingly impossible green and russet jigsaw of Orkney's North Isles".[9] Calf of Eday lies 1,148 feet to the north of the settlement of Calfsound. Further east is Sanday across the Eday Sound. Stronsay and Linga Holm are to the south east and Muckle Green Holm to the south west beyond the straits known as the Fall of Warness. Egilsay lies some 3 miles due west. Rusk Holm, Faray and Holm of Faray lie beyond the Sound of Faray to the north west and beyond them is the larger island of Westray.

In common with its neighbouring isles, Eday is largely formed from Middle Old Red Sandstone deposited in the Orcadian Basin with a small outcrop of Rousay-type flagstone at Backaland in the south.

The rock is easily quarried and some of the yellow sandstones were used in the construction of St Magnus Cathedral in Kirkwall.[1] The "Eday Group" is the name for a substantial sequence of sandstones largely composed of yellow and red sandstones with intervening grey flagstones and marls, that is found at many locations in Orkney.[12]

The very limited archaeological record provides scant evidence of Mesolithic life in Orkney, but the later assemblage of houses and monumental Neolithic structures in the archipelago is without parallel in the United Kingdom.[13]

The chambered cairn of Vinquoy, located in a commanding position overlooking the Calf Sound, is 56 feet in diameter and 8 feet high. The narrow entrance passage leads to a central chamber with four side-cells.[14] Other sites of interest include the Stone of Setter standing stone that dominates the col north of Mill Loch, and which at 15 feet high is one of the tallest monoliths in Orkney.[15]

There are two more chambered cairns at Braeside and Huntersquoy and another on the Calf of Eday. Rectangular in shape, it was excavated in 1936-37 and contains a small chamber with two compartments and a larger one with four stalls that has a separate entrance and was probably added at a later date.[16] 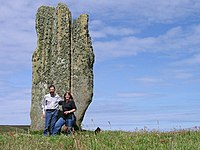 The Stone of Setter

The lichen-covered Stone of Settler is said to resemble a giant hand.[17]

Although there are several Bronze Age sites on the island they provide less dramatic remains. At Warness in the south west there is a burnt mound from this period and there are the ruins of two houses of a similar age on Holm of Faray near the Point of Dogs Bones.[18] There is the site of a large Iron Age roundhouse containing a saddle quern at Linkataing in north-western Eday.[19]

When the Norse first came to Eday is not known, though it is assumed that they settled the island at the same time as the rest of Orkney, possibly in the eighth century though it might have been much earlier. The place names of Eday are Norse for the most part, and certainly with no echo of any pre-Norse population.

The Norse-era ruins of the Castle of Stackel Brae, which dates from the 12th or 13th centuries, lie under a green mound to the east of the Bay of Greentoft.[20] The castle may have been the the most important building on Eday at this time.[21]

In 1468 Orkney became part of the Kingdom of Scotland[22] and an influx of entrepreneurial Scottish settlers helped to reform the economy of the islands.

Peat extraction was also an important industry in the past as Sanday and North Ronaldsay obtained most of their fuel from Eday and this material was also exported to whisky distilleries on mainland Great Britain.[10]

John Stewart, 1st Earl of Carrick, the brother of Earl Patrick, was granted Eday in 1632[26] and he constructed Carrick House at Calfsound shortly thereafter.[23] This is where the pirate John Gow was captured.

Ferry arrival at Bay of Backaland

The European Marine Energy Centre (EMEC) based at Stromness in Orkney installed a wave testing system at Billia Croo on the Orkney mainland and a tidal power testing station on Eday.[27]

Eday Partnership, the local development trust is active in promoting the island's economy and has instigated numerous projects, including Eday Heritage Centre, and the purchase of a new diesel tank for the island. A community-owned wind turbine is planned. Eday's various community projects contributed £380,000 to the island's economy from 2005-7.[28]

In July 2008 the island celebrated the opening of the Eday Heritage and Visitor Centre in the restored former Baptist Church. There is a heritage display area, a permanent archive, a café and a tourist information point. The Eday Oral History Project, which records life on the island in the past, is also housed within the centre.[29] 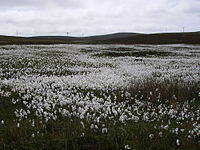 Bog cotton, by the roadside near Sandhill

In the early 19th century Patrick Neill wrote of the local flora that "Eda is a mossy island; a great part of it consisting of barren marshy heaths. Juncus uliginosus here covers whole acres; and the pretty little plant radiola millegran, or all-seed, is everywhere strewed." Radiola millegran is known today as Radiola linoides.[30] Over 120 species of wild plant have been recorded on the island.[9]

In the mid 17th century Eday was described as being "absolutely full of moorland birds"[23] and today is known for its populations of seabirds.