Papa Westray, also known as Papay, is one of the islands of Orkney, lying just to the northeast of Westray.

Papa Westray had a population of 65 at the time of the 2001 Census, latterly increased to 70, and an area of 2,268 acres, making it the second-smallest of Orkney's inhabited islands (the tenth in size amongst the group).

The soil is very fertile,[1] and this has long been a draw to the island.

Current historical attractions on the island include Holland House with an associated folk museum and the Knap of Howar Neolithic farmstead. 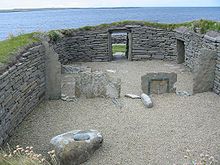 The main house of the Knap of Howar

At the northern tip of the island lies North Hill rising to 161 feet, the island's highest point and an RSPB nature reserve. Many sea birds breed on the island, including Arctic terns and Arctic skuas. It was one of the last places where the Great Auk was found; the last individual was killed in 1813. The reserve is also home to the rare and tiny purple-flowered Scottish primrose Primula Scotica.

The Knap of Howar Neolithic farmstead (Historic Scotland; accessible at all times) is the oldest preserved house in northern Europe, dating from around 3500 BC.[1] The homestead, which consists of two roughly rectangular stone rooms side by side, linked by an internal door, and with doors to the outside at the west end, is partly subterranean, and virtually complete to roof height. Examples of the round-bottomed Unstan ware have been found here, and provided the key to dating the settlement.[1]

According to tradition, in the 8th century AD, the Pictish King Nechtan attempted to seduce a young woman from the island named Triduana, who in response gouged her own eyes out. She later became abbess of a nunnery at Restalrig, now part of Edinburgh, and was in due course canonised as Saint Tredwell. A chapel was consecrated to her on Papa Westray and became a place of pilgrimage for people with eye complaints.

The island is one of the "Papey"s or "islands of the papar. Joseph Anderson noted that:

The two Papeys, the great and the little (anciently Papey Meiri and Papey Minni), [are] now Papa Westray and Papa Stronsay... Fordun in his enumeration of the islands, has a 'Papeay tertia' [third Papey], which is not now known. There are three islands in Shetland called Papey, and both in Orkney and in Shetland, there are several districts named Paplay or Papplay, doubtless the same as Papyli of Iceland.[2]

Also on the island is the 12th century parish church of St Boniface (recently restored; open in summer) with a carved Norse "hogback" gravestone (probably also 12th century) in the churchyard. This stands on a substantial and largely unexcavated 9th century, or earlier, Pictish religious site – possibly including a bishop's residence. Remains of a heavily eroded broch can be seen on the shore. Early Christian carved stones, which may date from as early as the 7th century AD, found at this site are on display in Tankerness House Museum, Kirkwall and the National Museum of Scotland in Edinburgh. These may be the earliest evidence for Christianity to survive in the Northern Isles.

Another ancient monument that can be visited is a well-preserved Neolithic chambered cairn on the small island of Holm of Papa Westray, a little east of Papay itself (and readily visible from the larger island). The long, stalled cairn, built of local stone, was once a communal burial place for the bones of an ancient community. It is protected by a modern roof and entered by a man-hole from above. This can be seen at any time of day, but visitors must arrange privately for a boat through the local Co-Op.

Papa Westray is the birthplace of the Orcadian educator and man of letters, John D Mackay.