Rysa Little is an uninhabited island of Orkney; an isle of just 79 acres (depending on the state of the tide) and rising 66 feet above sea level at its summit.

The island lies in Scapa Flow, just off the shore of the much larger island of Hoy. Nearby it lies the islet of Cava. Between Rysa Little and Fara runs the Gutter Sound, which is where the interned German Imperial High Seas Fleet was scuttled by its officers in 1919. 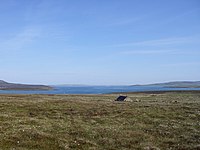 Rysa Little (left, with Hoy behind) glimpsed from Fara

Many of the smaller South Isles of Orkney lost their resident populations during the course of the twentieth century, but Rysa Little has not been inhabited since earlier times.[1]