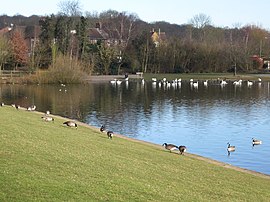 The Hundred of Elthorne in Middlesex

Elthorne is a hundred of Middlesex, covering the north-western part of the county. At the western edge of the county, there is a great deal of green space left in the Elthorne Hundred, much of it now green belt. There are farms at the edge of Uxbridge and the metropolis ends before the extensive farmland and woodland around the village of Harefield in the north-west, not to mention the Ruislip Woods and commons, the Yeading Valley and the enforced open space of Northolt Aerodrome. Nevertheless, it still had a recorded population of 461,562 in 2011.

The vast spread of Heathrow Airport sits in the very southern edge of the hundred; the airport is named after a quiet hamlet, Heath Row, which once stood here amongst fields, and around it is all the development brought about by one of the world’s busiest airports.

The Hundred of Elthorne is bounded by Hertfordshire and Buckinghamshire on its northern and western boundaries, and within Middlesex bounded by four of the county’s five other hundreds: Gore to the north-east; Ossulstone to the south-east; Isleworth to the south; and Spelthorne to the south-west.

The ancient parishes and main towns of the hundred are: