Harmondsworth is a village in the south-west of Middlesex, uncomfortably close to Heathrow Airport, immediately to the south. The village adjoins the M4 motorway and the Bath Road (the A4).

Harmondsworth is an ancient parish which once included the large hamlets of Heath Row, Longford and Sipson. Longford and Sipson have modern signposts and facilities as separate villages, remaining to a degree interdependent such as for schooling.

In October 2016 it was announced by HM Government that Heathrow Airport would receive permission to apply for a third runway. According to current expansion plans, around half of the existing village of Harmondsworth will have to be demolished to make way for the north-west runway and surrounding grass safety area. The other half, including the parish church and Great Barn, will be only a few yards from the airport perimeter.

The village has two pubs: The Crown and the Five Bells.[1]

The Harmondsworth Barn and its church are well-repaired mediæval buildings in the village. The largest proportion of land in commercial use is related to air transport and hospitality. The village includes public parkland with footpaths and butts onto the River Colne and further land in its regional park to the west, within Colnbrook.

The west of the village has two major airline headquarters (international and local) and two immigration detention centres, including one for a maximum of 620 men without either adequate proof of right of entry to, or to remain in, the United Kingdom. Many international visitors stay within the bounds of Harmondsworth each year, in hotels branded as "Heathrow", as the hamlet of Heathrow and the farm of Perry Oaks in the parish were absorbed by the airport, and the name is applied to all hotels accessed from Bath Road in the borough.

The name of Harmondsworth is first recorded in the year 780 when King Offa granted land to his servant Aeldred.[2]

The Great Barn from the west

{{Quote|HARMONDSWORTH (Virgin Mary), a parish, in the union of Staines...Middlesex, 2½ miles (E. by N.) from Colnbrook; containing 1330 inhabitants. The living is a vicarage, with that of West Drayton united, net income, £530; patron, H. De Burgh, Esq...The church has a Norman door, and a tower with angular turrets, On Hounslow heath, in the parish, is a square intrenchment, each side measuring 100 yards, supposed to have been the work of Caesar in his war with Cassivelaunus.[6]

Harmondsworth as an ancient parish of 30 hides (as assessed at Domesday, 1086) or 3,480 acres.[9] (rather than today's surviving village nucleus) changed from agrarian and a few, isolated London suburban homes to mostly industrial gradually in 1929 with the opening of the Colnbrook bypass which by-passed diminutive Longford to the north.

In 1930 the Road Research Laboratory opened on the road through t parish. In the same year the Fairey Aviation Company opened an airfield, the Great West Aerodrome, south-west of Heath Row. This formed the nucleus of the later airport, and the Fairey hangar was eventually incorporated into Heathrow Airport as a fire station.

By the late 1930s some residential building had taken place, although almost entirely in the northern half of the parish. Small estates were built off Hatch Lane around Candover Close and Zealand Avenue and further building took place along Sipson Road, around Blunts Avenue, and along the north side of the Bath Road at Sipson Green. Longford remained virtually untouched. A brick-works was established by the corner of Cain's Lane and Heathrow Road and the area of former heathland was extensively worked for gravel, sand, and grit. In the 1930s Middlesex County Council opened a large sewage pumping station to the west of Perry Oaks, which was converted to Heathrow Terminal 5 in the early 21st century. The Great South West Road touched the south-east corner of the parish but played no part in its development. Although many of the orchards survived, their numbers had been greatly reduced and it seems probable that much of the former fruit-growing area was being used for market gardening.

In 1944 Harmondsworth and Sipson retained their agricultural character despite some suburban housing. It was then suggested that further expansion in the Yiewsley and West Drayton area should be curtailed, as the land was primarily in demand for agriculture, which was greatly adhered to until 1971.[10]

Farm buildings at the eastern end of Harmondsworth

In 1944, however, the modern pattern of Harmondsworth began to emerge with the transfer of the Fairey airfield to the Royal Air Force and its subsequent development by the Air Ministry as Heathrow R.A.F. station. This entailed the complete demolition of Heathrow and Perry Oaks hamlets, and widespread draining of the old flooded gravel pits. Many of the small buildings along the south side of the Bath Road that were still standing in 1960 were erected by the R.A.F.[10]

The historic parish church of Harmondsworth is the church of St Mary, of which parts date from the 12th century.[11][12] There is an opinion[13] that Heathrow Airport is legally responsible for maintaining this church's chancel, because the airport now owns land (formerly in the hamlet of Heath Row) which in 1819 at the enclosing of the commons had been assigned in lieu of tithes used to maintain the chancel. 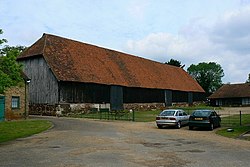 The most notable historic building in Harmondsworth is the Grade I-listed Harmondsworth Great Barn, which is Britain's largest barn.

The barn of today stands on the site of an earlier great barn, but it is no newcomer: the Great Barn was built between 1425 and 1427 on land bought by William of Wykeham, Bishop of Winchester, in 1391, to endow his colleges Winchester College and New College, Oxford. It is the largest extant timber-framed building in Britain, and was described by the poet John Betjeman as the "Cathedral of Middlesex".[14]

The barn from the south-west at dusk

As of January 2012 the barn has been owned by English Heritage.[15]

A similar barn, built 25 years later in 1451–53, but shorter (with eight bays as opposed to the Harmondsworth Barn's 12), is at Old Burghclere in Hampshire. This monumental barn was also built on land acquired by William of Wykeham. While the Harmondsworth barn was part of Winchester College's endowment the Burghclere barn passed to the family of Fiennes who had married the heiress of Wykeham's great-nephew heir. It now is part of the Highclere estate belonging to Lord Carnarvon.[16] 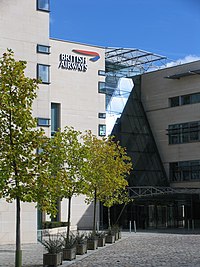 Waterside, the headquarters of British Airways

British Airways is headquartered in Waterside in Harmondsworth.[19] The building officially opened in 1998.[20] An office of American Airlines occupies Orient House, Waterside.[21]