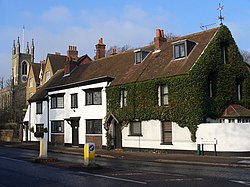 The Hundred of Spelthorne in Middlesex

Spelthorne is a hundred of Middlesex, in the south-western limit of the county, in the corner between the Rivers Thames and Colne. Across the Colne to the west is Buckinghamshire and south over the Thames is Surrey. The hundred follows the bank of the Thames as far down as Teddington. To the north are the Isleworth Hundred and Elthorne Hundred.

Though at the edge of the county, the Hundred of Spelthorne is heavily industrialised and overspread with houses, much of the urban development less sympathetic than that of the polite swallowed villages in north-western Middlesex. It was recorded as having a population of 212,650 in 2011.

In the north, just across the boundary with the Elthorne Hundred, is the vast spread of Heathrow Airport and around it all the development brought about by one of the world’s busiest airports, on what was within living memory green fields. South of the airport as far as the Surrey border is a series of reservoirs and gravel pits, and between them all cut major routes, including the M3 motorway and M4 motorway, their feeder roads and trunk roads including the A4 and A30.

In contrast, the southern edge of the hundred and of the county along the Thames is famed for pretty riverside towns and vistas, dotted with boat houses. The bulge where the Thames turns north is far from urban; filled with the park of Hampton Court and beside it Bushey Park.