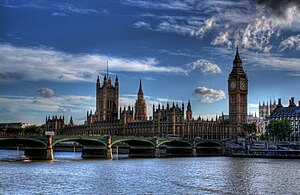 The Hundred of Ossulton in Middlesex

Ossulstone is a Hundred in the south-east of the county of Middlesex.[1] Its area has been entirely absorbed by the growth of London, as has virtually the entire county.

This is the largest and most urban of the county's six hundreds, bordering three others: Edmonton and Gore to the north; and Elthorne in the west. The Hundred of Ossultone extends to the borders of four counties: Essex across the River Lea in the east; Surrey and Kent across the River Thames to the south; and Hertfordshire in the north. It accounts for more than half of Middlesex's population, with a population of 2,035,688 in 2011.

The hundred is named after "Oswald's Stone" or "Oswulf's Stone", an unmarked monolith, possibly pre-Roman, which was situated at Tyburn (the modern-day junction of the Edgware Road with Bayswater Road). It is possible that this stone might have been named after a Middle Saxon king and it is likely that early assemblies or "moots" of the Middle Saxon people were organised here. Oswald's Stone was earthed over in 1819, but dug up again three years later because of its presumed historical significance. Later in the 19th century it was to be found leaning against Marble Arch following its move. In 1869, shortly after an archaeological journal published an article about it, the stone disappeared and it has not been identified since.[2]

The Ossulstone Hundred is bounded on all sides by rivers. To the south its border is the River Thames, to the east it borders the River Lea and to the north and west it is bordered by the River Brent. The authorities of the Hundred never had authority in the City of London, although geographically it forms part of it.[3] Historically it contained numerous "liberties" wherein the usual authorities were excluded to some extent or entirely, which included the City and Liberty of Westminster, the Savoy Liberty (belonging to the Duchy of Lancaster), the Tower Liberty, the Rolls Liberty and the Saffron Hill Liberty (at Ely Place, belonging to the Bishop of Ely).