Saffron Walden is a jewel of Essex, a delightful small town full of historical buildings and things of interest. It sits in the north of the county, 12 miles north of Bishop's Stortford and 18 miles south of Cambridge. The town retains a rural appearance and many very old buildings dating from the Middle Ages and those from later ages.

The historic heart of the town circles around the Market Square. Here stands the half-timbered Guildhall and around it buildings of all ages. Little lanes stretch off, up and down the hill, lined with cottages, shops and old inns, some with spirited pargetting, the local art celebrated in Essex and Suffolk. The town is in a fold in the hill, the High Street (west of the Market Square and town centre) running down to George Street, then climbing to the broader, newer (Victorian and Edwardian) end of the town to the south. 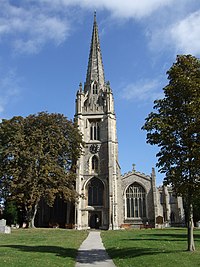 St Mary's dates mainly from the end of the 15th century, when the previously existing and smaller church was extensively rebuilt in flint. In 1769 it was damaged by lightning and the repairs, carried out in the 1790s, removed many of the mediæval features. The present spire was added in 1832 to replace an older 'lantern' tower. The church is 183 feet long and the spire 193 feet high, and is the tallest in Essex.

Sites and buildings of interest 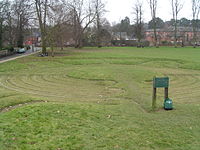 A photo of the turf maze 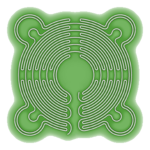 In Saffron Walden also are the ruins of the 12th-century Walden Castle, built or expanded by Geoffrey de Mandeville, Earl of Essex. After the Middle Ages, the castle fell slowly into disuse and much of the flint was taken and used in the construction of local houses and the wall surrounding the Audley End estate. All that remains today is the ruined basement.

Nearby to the castle is the Maze, a series of circular excavations cut into the turf of the common. It is the largest turf maze in Britain, the main part being about 100 feet in diameter. The earliest record of it was in 1699, and it has been extensively restored several times, most recently in 1979.

There is also a hedge maze in nearby Bridge End Garden. The garden, which lies off Castle Street and Bridge Street, dates from the 1840s and was originally laid out by Francis Gibson, a member of the locally well-known Gibson family who were eminent Quakers, bankers and brewers. The gardens have been lovingly restored back to their former glory with help from the Heritage Lottery Fund and local volunteers and are open 364 days a year, although maze opening times vary. Close to the Bridge End Garden is the Fry Art Gallery which exhibits the work of artists who had an association with Saffron Walden and north west Essex. One artist of note included in the Fry Art Gallery collection is Edward Bawden who lived in the town during the 1970s and 1980s.

Bridge End Garden is a Victorian garden restored back to its former glory and open to the public, free to visit and open 364 days a year. The gardens are made up of different segments such as a rose garden, Dutch sunken garden, kitchen garden, main lawn and hedge maze. the restoration returned the gardens to how they appeared in 1870 as well as the overall look being in period so is the planting. Signs are kept out of sight so what you see is as close as possible to the 1870 appearance almost a living museum.

Nearby is the Anglo American playing fields and monument to commemorate the American airmen and people of Saffron Walden borough that died in the Second World War.[1][2]

Another tourist attraction is Audley End, a manor house built by the Earl of Suffolk in the seventeenth century on the site of the mediæval Walden Abbey, which had been rebuilt by Sir Thomas Audley. When first constructed, the house was one of the largest in England. However, two thirds of it was later demolished when it was found to be difficult to maintain. The house and gardens are now owned by English Heritage and are open to the public. During the summer months concerts in the style of the BBC Proms are held here, typically an evening of music of diversity ranging from classical to rock to jazz followed by a fireworks display. Another annual fireworks display is held on the Saturday nearest to the 5 November. This event is organised by the Round Table and is held on the common – near the maze.

Nearby Audley End is the Audley End Miniature Railway, which is a 10¼" gauge railway ride through woodland. The ride is a mile and a half long and has been part of the Saffron Walden landscape since it was opened in 1964. It is a popular site with children.

The oldest inhabited building in Saffron Walden, a 600-year-old former maltings, became a youth hostel before closing. It is now being renovated as a private home, and is also being used for functions.

Other sites include the Corn Exchange (now a library) and the market square around which a number of buildings of historical interest and the Town Hall are centred. Market Days are Tuesdays and Saturdays.

There has been a village on or near the site of present day Saffron Walden since before Roman days[3] when Bronze and Iron Age tribes settled in the area. After the Romans withdrew, a flourishing Anglo-Saxon town was established.[3] 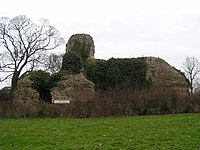 The remains of Walden Castle

After the Norman conquest of 1066, a stone church was built. The castle, Walden Castle, was built c.1116. A Priory, later to become 'Walden Abbey, was also founded under the patronage of Geoffrey de Mandeville, first Earl of Essex around 1136. The abbey was separated from the town of Walden by Holywell Field, which was enclosed in the sixteenth century to form part of the park of Audley End, the house of Sir Thomas Audley, who converted the abbey cloisters to a dwelling c. 1538-44[3] The inner or Little Court of the seventeenth-century house corresponds to one of the cloisters.

In 1141 the area's market was transferred to the town from nearby Newport, further increasing the town's influence and its prosperity.[3] The town's first charter was granted in 1300. This early town was known as Chipping Walden ("Market Walden"). The town was at first largely confined to the castle's outer bailey, but in the 13th century the Battle or Repel Ditches were built or extended, to enclose a new larger area to the south. The focus of the town moved southwards to Market Square.

In the Middle Ages, the primary trade in Saffron Walden was in wool, but in the 16th century and 17th century the saffron crocus became widely grown in the area. The flower was precious, as extract from the stigmas, the saffron, was used in medicines, as a condiment, as a perfume, as an aphrodisiac, and as an expensive yellow dye. This industry gave its name to the town and Chipping Walden became Saffron Walden.

The town and the surrounding area, like much of East Anglia, was strongly Puritan during the 17th century. This area in particular was one heavily influenced by the Rev John Eliot. By 1640, the Samuel Bass family and a number of others had departed for the Massachusetts Bay Colony as part of the wave of emigration that occurred during the Great Migration.[4]

Given its theological leanings and geography, seventeenth century Saffron Walden found itself at the center of the Eastern Association during the decade of the English Civil War. In the Spring of 1647, while serving as a New Model Army headquarters, the town was visited by then Lieutenant-General of Horse, Oliver Cromwell. The parliamentarian forces were internally divided at that time and Cromwell asked to see if compromise could be found that would reunify them in purpose and perhaps avoid another flare-up of civil war.

By the end of the 18th century the saffron crocus was no longer in such demand, and the flower was replaced by malt and barley. In the 1830s there were more than 30 maltings and breweries running. Although this trade was not so rewarding as the saffron, the town continued to grow throughout the 19th century, having a cattle market and building a corn exchange and other civic buildings. During this time Quakers became very active in Saffron Walden, the most influential family being the Gibsons, who aided in the construction of several buildings that remain today, such as the museum[5] and the Town Hall.

The 1900s saw expansion of the Saffron Walden branch railway line that extended from Audley End, on the mainline from London to Cambridge, to Bartlow. This closed with the Beeching cuts in the 1960s.

Heavy industry arrived in the area following the Second World War. Acrows Ltd, makers of falsework, created their site to the east of the town and became a significant employer and economic influence in the area. Light industry was also added to the south of the town at Shire Hill. As the local agricultural economy continued to mechanise, the new-found employment opportunities were welcome and a period of migration into the town from surrounding villages led to major expansion of housing estates during the 1970s and 1980s.

Today, Saffron Walden is a flourishing and historic town. Because it has never been sacked or destroyed by fire, many of the buildings, streets and features, especially in the centre of town, date back centuries. Although the 1900s brought many changes and expansion, the character of the town and the valley in which it sits remains strongly intact.

Saffron Walden did not have an official coat of arms until 1960. Until that date an unofficial coat of arms was used. It is not certain when these arms were first used, although they are engraved on the large mace given to the town in 1685. These arms show the Saffron Crocus within the walls of the castle. They are intended as an heraldic pun (known as Canting arms) - "Saffron walled-in".

In 1961 the Borough Council applied to the College of Arms for a formal coat of arms, which was granted by Letters patent. Following the Local Government reorganisation of 1974 these arms were adapted by the addition of mantling and today, form the official arms of Saffron Walden Town Council.

The official armorial description is:

Saffron Waldon Town Council has three ceremonial maces with history behind them.

The large mace was given to Saffron Walden by James II in 1685, the year of his accession. The mace, which is made of silver gilt is approximately 4 feet long and around its head are the symbols of the King's realms; the rose of England, the thistle of Scotland, the harp of Wales and the tricorn of Ireland. On the main stem are engraved the coat of Arms of the town as they were known in 1685.

The mace is carried in front of the Mayor on all ceremonial occasions by the Town's macebearer. The present macebearer is Mark Gilbert.

The two small maces are made of silver, measure approximately 9 inches and weigh about 2 lbs each. The maces were purchased by the Corporation in 1549 to commemorate in that year the granting to the town of a new charter by Edward VI. The purchase of the maces is recorded in the Guild of Holy Trinity Accounts and reads, "For 2 new maces, weying 18 ownces one quarter and half at 8s. the ownce 7l.7s".

The two small maces used to be carried by the Serjeant-at-Arms, but during the last war this tradition ceased. The maces are kept on view in the town's museum.

Saffron Walden is the name of a hymn tune, often associated with the hymn Just as I am. It was written by Arthur Henry Brown (1830–1926) from Essex.[6][7] He wrote many hymn tunes, which he often named after his favourite places, but there is no recorded reason for his naming of this tune after Saffron Walden.