Rochford is a town in Essex, about 21 miles from the county town, Chelmsford. According to the 2001 census the civil parish of Rochford, which includes the town proper, Stroud Green, and Southend Airport, had a population of 7,610.

The town takes its name from the Old English for Hunting Dogs Ford. The River Roach was originally called the Walfleet and its current name is a back-formation from that of the town.

The town is just to the north of Southend on Sea, but is sufficiently separated from both Southend and Rayleigh to preserve its own identity. It runs into suburban developments in the parishes of Ashingdon and Hawkwell.

Kings Hill, in Rochford, was notable for containing the Lawless Court up until the 19th century.[1]

In 1837 John Banyard (a reformed drunk and a Wesleyan preacher) and William Bridges took a lease on the old workhouse at Rochford which became the first chapel of the Peculiar People, a name taken from Deuteronomy 14:2 and 1 Peter 2:9. The Peculiar People practiced a lively form of worship bound by the literal interpretation of the King James Bible, banning both frivolity and medicine. During the two World Wars some were conscientious objectors, believing that war is contrary to the teachings of Christ.

Nearby Southend Airport started life as a grass fighter station in First World War.[2] The site was founded in the autumn of 1914 when farmland between Westbarrow Hall and the Great Eastern railway line at Warners Bridge 2½ miles north of Southend Pier was acquired for RFC training purposes. Training continued until May 1915 when the site, known also as Eastwood, was taken over by the RNAS to become a Station (night) in the fight against intruding Zeppelins. After the last RNAS action from here on it became once again RFC Rochford. Initially it was defined as a Home Defence night landing ground but in September was reclassified as a Flight Station (night). Normal Home Defence duties continued until after the Armistice when a run-down of unit activities began, with No.198 Sqn disbanding in May and No.61 in June 1919. Except for the occasional civilian flights aviation lessened, even more so when the station closed in 1920 and the site returned to farmland.

Southend Airport was opened on the site on 18 September 1935. As Second World War approached it was requisitioned by the Air Ministry in August 1939[3] for use as a fighter airfield by No.11 Group RAF. London Southend Airport|RAF Rochford was a satellite station for RAF Hornchurch and was primarily a fighter base, home mainly to Supermarine Spitfire and Hawker Hurricane aircraft. Rochford airfield was accompanied by a radar base in Canewdon (around 4 miles away). Due to the presence of the airfield Rochford was bombed a number of times during the war.

Until the early 1980s one of the largest employers in Rochford was the Lesneys factory, who manufactured the famous Matchbox miniature die cast model. However, this company relocated to Rugby in Warwickshire in 1990.

There is a Hall in Rochford which is privately owned by a family which live within the building, along with the golf course who also own a part of it. In 1525, Henry VIII awarded Thomas Boleyn the title of Viscount Rochford. Rochford Hall subsequently became the home of Mary Boleyn, sometime mistress of Henry VIII and (probably elder) sister of (Queen) Anne Boleyn, during her second marriage to William Stafford.

Rochford railway station from which trains run to Southend Victoria and to Liverpool Street station in the City of London. In consequence it has long been popular as a dormitory town for commuters. Southend Airport railway station on the eastern boundary of the airport, opened on 18 July 2011.

There are twice daily scheduled flights to Waterford available from [[Southend Airport and with budget airline easyJet operating flights 9 destinations, from April 2012. Dublin and Geneva have also been announced as new routes from the airport for 2012. 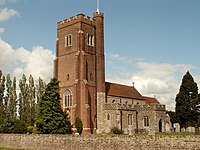 St Andrew's Church, Rochford is located near the Rochford Hundred Golf Club and is part of Rochford Deanery,[5] within the Bradwell Area[6] of the Diocese of Chelmsford[7] of the Church of England.