Dunblane is a small cathedral town and burgh in Perthshire. It is found off the A9 road that heads north to Perth, and north of Stirling.

The main landmark is of the town is Dunblane Cathedral, no longer a cathedral as such but a parish church of the Church of Scotland, it retains the title in popular parlance as do many such of the Kirk's former bishops' seats.

The town is served by Dunblane railway station.

The name "Dunblane" is traditionally believed to mean "fort of Blane". This early saint, known in Old Irish as Bláán, flourished probably in the late 6th century. His main seat was Kingarth on the Isle of Bute. He or his followers may have founded a church at Dunblane, or the cult of Bláán may have come there with settlers from what is now Argyll in later centuries. However, documentary information from this period is difficult to verify. The spelling of Dunblane varies wildly between these documents, casting some doubt as to whether it may mean "white fort" or whether the name is actually derived from the Gaelic at all. 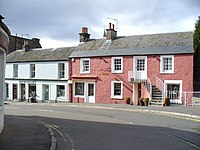 The town has seen rapid growth in recent years. The old town centre retains a number of historic buildings in addition to the cathedral, including the 17th-century Leighton Library, the oldest private library in Scotland open to the public (on selected days in summer). A well-preserved late mediæval town-house nearby (which was probably built as the manse of the Dean of the mediæval cathedral) houses a local history museum (open in the summer; free entry). A modern extension has recently been completed within its interior courtyard to provide additional exhibition space and allow disabled access.

The north side of the town is dominated by the Dunblane Hydro Hotel, currently owned by the Hilton Hotel Group and known as the Double Trees. The huge Victorian building sits in extensive wooded grounds on the top of a steep and wide grass slope, giving it a very imposing appearance on the crest of the slope. Dating from late Victorian times it has been redeveloped and extended several times but still retains its main building relatively intact. Whilst, like the other Scottish "Hydros" (Crieff and Peebles), it originally housed extensive spa and therapeutic bath facilities, these are all now housed in an independent modern building to its side. 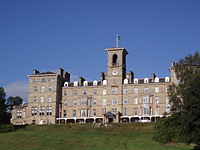 Since the early 1970s the town has grown extensively and is now regarded as a highly-sought-after commuter town due to its excellent road and rail links to Glasgow, Edinburgh, Perth and nearby Stirling. This, coupled with the fact that the local high school consistently turns out some of the best results from a state school in Scotland, means that the town is not only sought-after by commuters but also by families of school-age children. How much of the school's performance is affected by the population bias, which is largely made up of middle class commuters, is subjective.

Dunblane is close to the University of Stirling's campus at Bridge of Allan, and is a popular location for academics.

The rapid expansion of the town, expedited by the bypass completion of 1990, has led to a large increase in local car usage, resulting in considerable parking problems. For a town of its size, Dunblane has something of a shortage of local amenities, with, for instance, only two supermarkets. As a result, many people prefer to shop in nearby Stirling.

In October 2007 a new church building was completed for Dunblane Christian Fellowship, sited opposite the railway station. Equally important is that Dunblane is at the northern end of both the Network Rail Edinburgh-Glasgow rail electrification project.

Dunblane is divided into two Church of Scotland parishes each with its own parish kirk.

Dunblane Cathedral is remarkable in having retained more of its late-mediæval choir stalls than any other Scottish church building excepting King's College Chapel in Aberdeen. It is also is noted for its organ. Further fragments of mediæval woodwork from the Cathedral are displayed in the town's museum, formerly the Cathedral Museum, situated nearby. Though still used as a parish church, the building is in the care of Historic Scotland.

To the south of the cathedral are some stone vaults of mediæval origin, which are the only remaining fragment of the bishop's palace.

The town attained the status of a royal burgh. Dunblane refers to itself as a city, due to the presence of Dunblane Cathedral. However this status was never officially recognised.[3][4] 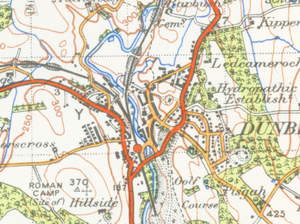 The earliest evidence for Christianity on the site of Dunblane are two cross-slabs of the 10th to 11th centuries which are preserved in the cathedral. Incorporated into the later mediæval building, but originally free-standing, is an 11th-century bell-tower, whose height was increased in the 15th century. The nave and aisleless choir are 13th century.

The Diocese of Dunblane in the Middle Ages was not rich nor extensive, it had but 37 parishes, and the cathedral is relatively modest in scale, but its refined architecture is much admired, as is its setting overlooking the valley of the Allan Water. After the Reformation, the nave of the cathedral was abandoned and soon became roofless and used for burials. The choir was retained as the parish church. The nave was re-roofed and the Cathedral provided with new furnishings by Robert Rowand Anderson between 1889 and 1893.

During the boom years of the Hydropathy movement in the 19th century, Dunblane was the location of a successful hydropathic establishment (see photo below).[5][6]

In September 2004 the Dunblane Centre[7] opened.[7] This purpose-built youth, family, arts, sports and meeting facility was built using money from a consolidation of several funds which were created in the aftermath of the 1996 tragedy.

It is now entirely self funding and is run by charity the Dunblane Youth and Sports Centre Trust (Charity No. SC027397),[8] with a board of trustees from the community (Steve Birnie, Chris Finnerty, Nora Gilfillan, Sue Lockwood, Stewart Prodger and David Spooner.

HM Queen Victoria School is a co-educational boarding school for children of those in the Armed Forces. It is situated roughly one mile north of the town centre, in a secluded area overlooking the A9.

The Queen Victoria School can trace its history back to the turn of the century when the idea was first mooted of a school to commemorate those Scottish soldiers and sailors who fell in South Africa during the Boer Wars. The proposal was warmly received by Queen Victoria herself, and upon her death the following year, it was resolved that the School should serve the dual purpose of commemorating the dead servicemen as well as being a living memorial to the late Queen-Empress. To this end money was raised in a national effort which captivated the imagination of the Scottish public. Every Serviceman donated a day's pay, and an appeal for contributions from the Scottish workforce received a generous response. Work began in earnest, and Queen Victoria School was officially opened on 28 September 1908 by His Majesty King Edward VII.

The school chapel is a notable example of Scottish mediæval revival architecture, based on the 14th century Dominican church of St Monans in Fife, now a parish church

Dunblane burst with horrow upon the national news on 13 March 1996. On that day Thomas Watt Hamilton]], aged 43 entered Dunblane Primary School and shot dead 16 children and their teacher, Gwen Mayor, in the gymnasium before killing himself. He used his licensed weapons and ammunition. It remains the deadliest massacre of children ever in the United Kingdom.

A memorial to the 17 victims stands in the local cemetery and a cenotaph in the cathedral. The funds raised in the aftermath of the tragedy have been used to build a new community centre for the town. Following the incident, Parliament passed legislation banning ownership of all handguns (firearms under 60 centimetres in overall length) in Great Britain.