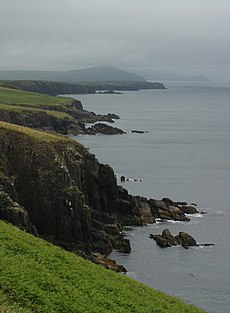 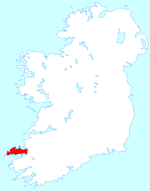 Location map of the Dingle Peninsula

The Dingle Peninsula (Irish: Corca Dhuibhne) is the northernmost of the major peninsulas in County Kerry. It reaches out into the Atlantic Ocean and ends beyond the town of Dingle at Dunmore Head, the westernmost point of mainland Ireland.

The Irish name Corca Dhuibhne has been anglicized to Corkaguiny, to give the name of the barony of Kerry which it forms.

The Dingle Peninsula is named after the town of Dingle. The peninsula's Irish language name, Corca Dhuibhne takes its name from the túath (tribe) of Corco Dhuibhne who occupied the peninsula in the Middle Ages and who also held a number of territories in the south and east of County Kerry.

The peninsula is formed of the band of sandstone that forms the Slieve Mish mountain range at the neck of the peninsula, in the east, and the unnamed central mountain range further to the west. Here stands Mount Brandon at 3,120 feet, Ireland's highest mountain outside MacGillycuddy's Reeks, part of a beautiful high ridge with stunning views over the peninsula and North Kerry.

The Conor Pass, which runs from Dingle on the southern end of the peninsula towards Brandon Bay and Castlegregory in the North, is the highest mountain pass in Ireland, a tight, precarious road, weaving its way around the sharp cliff faces and past the high corrie lakes.

The Blasket Islands lie off the west coast. They are famous for the literary and linguistic heritage of the inhabitants. However, these remote islands were evacuated in the 1950s and now lie uninhabited.

The western end of the peninsula is a Gaeltacht area that has produced a number of nationally notable authors and poets; Ó Siochfhradha and Peig Sayers among others. This is the most western part of Ireland, and the village of Dún Chaoin is often jokingly referred to as "the next parish to America".

The peninsula has numerous prehistoric and early mediaeval remains including:

A panoramic view of the Dingle Peninsula