Drax is a village and parish in the West Riding of Yorkshire, about six miles south-east of Selby, best known today as the site of Drax power station. The village has a Community Primary School and a public house, the Huntsmans Arms. It formerly had another pub, The Star, two village shops, a butchers, petrol station and sub-post office. 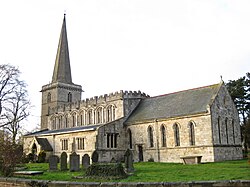 Drax has a Church of England parish church, dedicated to St Peter and St Paul. In the reign of King Henry I (1100–1135) William Paynel founded a priory of Augustinian Canons at Drax. In 1868 it was reported that traces of the priory could still be found[2] but fieldwork in the 1980s and 1990s has failed to find any physical remains of it.[3]

By the mid-thirteenth century, Drax was a borough of local significance. However, an inquisition held in 1405 stated that the local manor was of no value, as it had been flooded by the Ouse, and the borough was not even mentioned, leading George Sheeran to claim that flooding may have led to the abandonment of the town, or at least the end of its borough status.[4]

However, the inquisition post-mortem for Richard Lely of Drax, held in 1422, indicates that his part of the land was not completely worthless, although the mill was ruined. His son John inherited and the property then passed to John's daughter Joan, who had been born and baptised at Drax in 1424. She was married to John Babthorpe in 1441 when witnesses to her age gave depositions at York Castle, and she recovered her property out of wardship. It may be that those who held the land while she was a minor neglected it, so that there was little for her husband to pass on to their heirs. The survival of the priory until the Reformation might suggest that the area continued to be farmed.

In 1667 Charles Read (1604–1669) founded Drax Grammar (now called The Read School) as a grammar school: It is an independent boarding school.[5] Read was born at Darlton, Nottinghamshire. and became a wealthy shipper in Kingston upon Hull. Two years later, Read's will endowed the school at Drax and founded further grammar schools at Tuxford in Notts. and Corby Glen in Lincolnshire.[6]

Read also funded the building of six almshouses in Drax for elderly people, stipulating that they should be for three men and three women.[7]

Drax had two railway stations: both are now closed. Drax Hales railway station was on the North Eastern Railway's Selby to Goole Line: British Railways closed it in 1964. Drax Abbey was on the Hull and Barnsley Railway: the London and North Eastern Railway closed it in 1932. In 1974 British Rail reopened about three miles of the H&BR from Gowdall Junction and a short length of the NER through Drax as a freight-only branch line to supply coal to Drax power station.

The former Central Electricity Generating Board commissioned Drax power station, located in the neighbouring parish of Long Drax, in two phases in 1974 and 1986. It is the largest power station in the United Kingdom, producing around 8% of Britain's electricity, and is the second-largest coal-fired plant in Europe. It has a potential consumption of 36,000 tons of coal a day and produces 1.5 million tons of ash a year. It is both the United Kingdom's largest producer of carbon emissions, and one of the UK's most carbon dioxide-efficient power stations.

Drax Power Station now produces half its output by burning biomass. This is controversial as the wood pellets it burns are claimed to produce more carbon dioxide than coal. 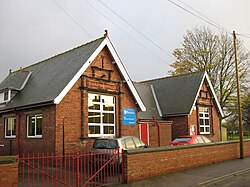