Wotton is a little village in the midst of rural Surrey, tucked amongst the hills in the valley of the Tilling Bourne.

The parish is a well-wooded area, with Wotton itself the main village standing on the A25 road running between Guildford in the west and Dorking in the east. The nearest village of any size with shops is Westcott. Wotton sits in the mouth of a narrow valley running south from the Weald, collecting the headwaters of the Tilling Bourne which then has its first combined flow in the Vale of Holmesdale. The parish is long north to south, reaching to the North Downs escarpment in the north to the escarpment of the Greensand Ridge at Leith Hill in the south.

Wotton Common, forming the south of the parish is elevated woodland dotted with a few vernacular-style houses and has the county's only natural waterfall. The common's main settlement is Friday Street. 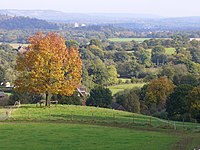 View towards Dorking and the Downs

The civil parish of Wotton is wholly within the 'Surrey Hills Area of Outstanding Natural Beauty' and runs up the narrow lane into the woods to include the pretty hamlet of Friday Street. The parish bounds reach from Leith Hill to the south to Ranmore Common to the north. Wotton itself sits in a small north then west facing valley, amassing the headwaters of the Tilling Bourne joining together in what becomes the west of the Vale of Holmesdale. The parish is long north to south, reaching to the North Downs escarpment in the north. To the south it reaches as far as the escarpment of the Greensand Ridge at Leith Hill.[1] 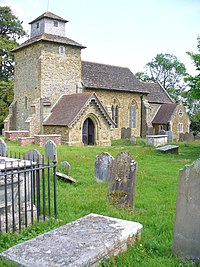 Wotton appears in Domesday Book of 1086 as Odetone. It was held by Osuuold (Oswold). Its Domesday assets were: 5 hides; 1 mill worth 1s 8d, 10 ploughs, 3 acres of meadow, woodland and herbage worth 73 hogs. It rendered £7 10s a year to its overlords; a modest drop since the Norman Conquest.[2][3]

John Evelyn, the diarist was born at Wotton House in 1620, which includes two grottos in the grounds. In 1694 he moved in as the main legatee. Wotton House was a training college for the Fire Service and then, after being empty for nearly 13 years, has been turned into a hotel and conference centre with over 100 bedrooms. Three areas of the House remain in the original layout and architectural style, and the hotel has a building and grounds of historic importance from the 17th century. Its unusually highly II* graded (listed above the grade many comparable parks achieve) garden and architecture for example are well documented. It has an orangery with decorative parapet and banded piers, terracotta decorations on brickwork, octagonal turrets and stacks, winged gryphons on the porch and Jean Derraux Chinese panels.[4][5][6][7]

The parish church of St John the Evangelist is situated in the scattered hamlet of Wotton at the end of Church Lane overlooking a broad sweep of the North Downs. The parish itself is a long finger stretching from the foot of the North Downs to Friday Street.

The church dates back to Saxon times, although only a few of the original footings now remain to the west of the Norman tower. Much of the church was of necessity restored in Victorian times, but there are still many interesting original features to see.[8] John and Mary Evelyn are buried in the Evelyn Chapel in St John's Church.