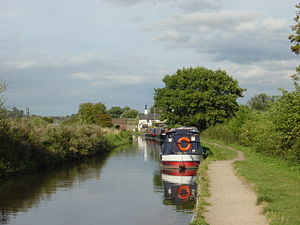 The Trent and Mersey Canal near Branston Water Park 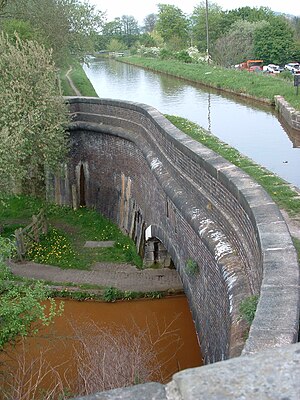 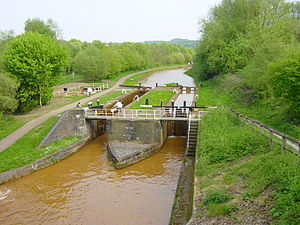 a typical set of Double locks on the T&M 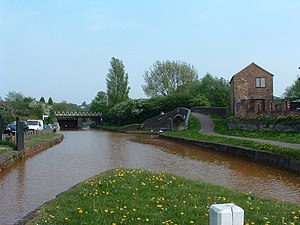 The Trent and Mersey Canal is a 93½-mile-long canal in Derbyshire, Staffordshire and Cheshire (map). It is a "narrow canal" for the vast majority of its length, but at the extremities to the east of Burton upon Trent and west of Middlewich, it is a wide canal.

The narrow locks and bridges are big enough for a single narrowboat 7ft wide × 72ft long, while the wide locks can accommodate boats 14ft wide, or two narrowboats next to each other.

As its name implies, the Trent and Mersey canal (T & M) was built to link the River Trent at Derwent Mouth (in Derbyshire) to the River Mersey. The second connection is made via the Bridgewater Canal, which it joins at Preston Brook in Cheshire. Note that although mileposts measure the distance to Preston Brook and Shardlow, Derwent Mouth is a mile or so beyond Shardlow.

The plan of a canal connection from the Mersey to the Trent ("The Grand Trunk") came from canal engineer James Brindley. It was authorised by an Act of Parliament in 1766 and the first sod was cut by Josiah Wedgwood in July that year at Middleport. In 1777, the canal was completed, including more than 70 locks and five tunnels, with the company headquarters in Stone.

The first known idea to build a canal between the River Mersey and the River Trent was put forward in 1755, though no action was taken at that time. In 1760, Lord Gower, a local businessman and brother-in-law of the Duke of Bridgewater, drew up a plan for the Trent and Mersey Canal. If his plan had gone ahead, this would have been the first modern canal constructed in England. James Brindley, the engineer behind many of the canals in Britain, did his first canal work on the Trent and Mersey, though his first job in charge of construction was on the Bridgewater Canal.

In 1761, Josiah Wedgwood showed an interest in the construction of a canal through Stoke-on-Trent, the location of his Wedgwood pottery, as his business depended on the safe and smooth transport of his pots. Pots transported by road were liable to be damaged and broken, and a canal near to his factory would provide fast and safe transport for his wares. Wedgwood's plan was not to connect the two rivers by canal, but to connect the potteries to the River Mersey. As a burgeoning industrialist, Wedgwood was a major backer of the Trent and Mersey Canal dug between the River Trent and River Mersey.

There was much debate about possible routes that a canal could take. Coal merchants in Liverpool felt threatened about a canal that could bring coal in from Cheshire. The owners of the River Weaver Navigation were also not happy about the proposals, because the route would almost parallel that of the river. Yet another route was published which, much to the shock of Wedgwood, did not at all include the potteries.

Wedgwood, intent to have a waterway connection to his potteries, managed to send his proposal to Parliament, with the help of two of his friends, Thomas Bentley, and Dr Erasmus Darwin. John Gilbert's plan for the "Grand Trunk" canal met opposition at the eastern end where, in Burton on Trent, the locals objected to the canal passing parallel to the upper Trent navigation. In 1764, Wedgwood managed to convince Gilbert to include the Potteries in his route. In 1766, Gilbert's plan was authorised by an Act of Parliament. Later that year, "[o]n July 26th a massive celebration was held in the Potteries where Josiah Wedgwood cut the first sod of soil. James Brindley was employed as engineer and work got under way."[1]

Six years before the complete opening of the Trent and Mersey Canal in 1771, Wedgwood built the factory village of Etruria on the outskirts of Stoke-on-Trent, close to the canal. By this time, much of the canal had been built towards Preston Brook. The only obstacle that still had to be tackled by the canal company was the hill at Kidsgrove, through which a tunnel was being dug. Up until 1777, pots had to be carried on the short journey from Etruria, over the top of Kidsgrove Hill, and to the other side, where the canal had been constructed to Preston Brook.

On 15 January 1847 the Trent and Mersey Canal was acquired by the North Staffordshire Railway Company (NSR). This was done to stifle the opposition of the Canal Company to the creation of the Railway Company. In particular, the NSR had plans for a railway from Stoke-on-Trent to Liverpool, however, this line was abandoned due to opposition from other rail interests.

The Grand Trunk was a part of a larger scheme of Brindley's to link the four main rivers of Trent, Mersey, Severn and Thames in a project known as the "Grand Cross".[2] The Trent and Mersey Canal provided the northern arm of the cross (to the Mersey), and the eastern arm (to the Trent). It also provided the central hub of the cross, between Great Haywood, and Fradley Junctions. The western arm, to the Severn, was built as the Staffordshire and Worcestershire Canal, whilst the southern arm (to the Thames) traversed the Coventry and Oxford Canals. 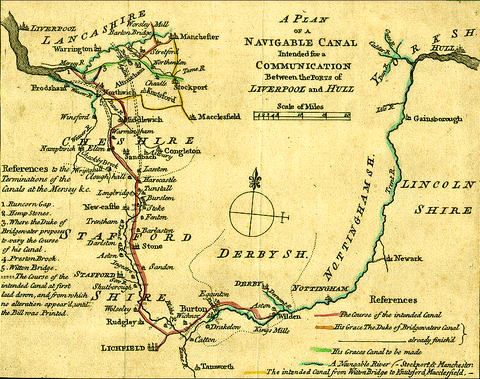 Plan for the Trent and Mersey Canal (marked in red)

On the Cheshire stretch of the canal, between Middlewich and the northern end of the canal in Preston Brook Tunnel, is the Victorian Anderton Boat Lift, which lowers boats fifty feet from the T & M to the River Weaver. It was restored to full operation in 2002 after twenty years of disuse, and was then the only operational boat-lift in the United Kingdom until the construction of the Falkirk Wheel in Stirlingshire.

Another major feature is the Harecastle Tunnel, near Kidsgrove in the city of Stoke-on-Trent, north Staffordshire. There are actually two tunnels; the first was built by Brindley and was 2,880 yards long, and barges were 'legged' through by men lying on their backs and pushing against the roof with their feet. This was a physically demanding and slow process and created major delays, so leading civil engineer Thomas Telford was commissioned to provide a second, wider, parallel tunnel with a towpath. This 2,926-yard-long tunnel was opened in 1827. In the 1900s, the Brindley tunnel was closed due to severe subsidence, but the Telford Tunnel - although also prone to the same problems - remains in use, and is the fourth-longest navigable canal tunnel in the United Kingdom.

The canal passes through the city of Stoke-on-Trent, where it meets the Caldon Canal.

The canal formed an integral part of the 1986 Stoke-on-Trent Garden Festival and in 1988 was declared a linear Conservation Area.[3] The towpath was upgraded in the 1990s and forms part of the National Cycle Network Route 5.

The northern end of the canal makes an end-on junction with the Bridgewater Canal within Preston Brook Tunnel, from which one can access Runcorn (but no longer the Mersey or Ship Canal) in one direction and Manchester (with its many canal links) in the other direction.

After Anderton, the next major destination is Middlewich, where a junction with the 50-yard-long Wardle Canal leads to the Middlewich Branch of the Shropshire Union Canal which gives access to Chester, Llangollen and (south on the 'Shroppie') a parallel route to Birmingham/Wolverhampton.

South of Middlewich, having passed through Wheelock, the T & M climbs out of the Cheshire Plain via the 'Heartbreak Hill' locks (more traditionally known as the 'Cheshire Locks') to the summit-level and the junction with the Hall Green Branch, leading to the Macclesfield Canal at Red Bull Kidsgrove. Most of the locks in this flight are doubled, although not all of the duplicates are still usable. Of particular note was lock 53 where, due to subsidence from brine pumping, the 'spare' lock was replaced by a steel contrivance with guillotine gates. Theoretically, this was adjustable to compensate for further subsidence although, in practice it was less than successful and was ultimately removed altogether. Little evidence of 'Thurlwood Steel Lock' remains today. The boater can use the Macclesfield Canal to head for Marple, and the junction with the Peak forest Canal (and hence, via the Ashton, Rochdale and Bridgewater canal) to complete the 'Cheshire Ring'.

After Kidsgrove, the canal passes into Staffordshire and the Harecastle Tunnel (one way, alternating roughly every two hours). Emerging in the outskirts of Stoke-on-Trent, it is soon in the middle of the city and then at Etruria, and the junction with the Caldon Canal.

Leaving Etruria, the T & M is soon back in open country. It is now in the valley of the infant River Trent (which the T & M follows until the river becomes navigable and the canal is no longer needed).

The next sizeable place is the market town of Stone.

After more countryside, the canal reaches Great Haywood Junction and the towpath bridge across the junction with the Staffordshire and Worcestershire Canal (which heads south to skirt Wolverhampton and join with the River Severn at Stourport-on-Severn, thus connecting the Mersey with the Severn).

The next event is a right angle bend, of no apparent significance from the boat, but a map shows that this is where the canal (and the Trent) changes its basic direction from south-west (heading away from Runcorn) to north-east (heading towards Nottingham).

Very near is Fradley Junction (with the Coventry Canal (detached portion). The Coventry soon leads to the Birmingham and Fazeley Canal and branches off to Birmingham or (via another stretch of Coventry Canal) to Coventry and a junction with the Oxford Canal and hence to all the 'Southern Half' of the English canals.

The canal now heads directly to its terminus, passing through Burton upon Trent, into Derbyshire to Mercia Marina at Findern, the largest inland waterway marina in the United Kingdom, and then through wide locks (the first being at Stenson) to Shardlow and finally, Derwent Mouth.

It is not far from Derwent Mouth, via the River Trent to Trentlock, the four-way junction with the Erewash Canal (dead end at Great Northern Basin, formerly a link with the Cromford Canal), Cranfleet Cut (bypasses Thrumpton Weir to continue navigation towards Nottingham) and the River Soar Navigation (links via Leicester to the Grand Union Canal).