Northwich is a town in Cheshire, in the heart of the Cheshire Plain, at the meeting of the rivers Weaver and Dane. It is one of the famed salt towns of Cheshire, the Wiches, along with Nantwich and Middlewich.

The area around Northwich has been exploited for its salt pans since Roman times, when the settlement was known as Condate. The town has been severely affected by salt mining with subsidence historically being a large problem. However, recent investment in mine stabilisation is set to change the town with the 'Northwich Vision' being a plan for future development work.

Northwich is in the Cheshire Plain about 18 miles east of Chester and 15 miles south of Warrington in Lancashire.

Two rivers meet in the town centre, the Weaver and the Dane. The town is surrounded by undulating pasture. Subsidence and the collapse of underground saltworks has created flashes[1] and there are also local meres - for example, to the north is Budworth Mere and to the northeast is Pick Mere.

The town is built on Lower Keuper saliferous beds from which salt has been mined. Deposits of alluvium run along the river valleys and cover most of the area of the town. Surrounding the town is deposits of boulder clay and glacial sand and gravel can be found to the north-west.

During Roman times Northwich was known as Condate, meaning "the confluence". It can be so identified through two contemporary Roman documents. The first of these is the Antonine Itinerary, a 3rd-century document describing the roads of the Roman Empire and the stations along them. Two of its sections, or Itineraries, mention Condate, namely: Itinerary II which describes "the route from the Vallum to the port of Rutupiae", or the route between Hadrian's Wall in northern England and Richborough on the Kentish coast; and Itinerary X is called "the route from Glannoventa to Mediolanum" and details the route between Ravenglass fort, Cumberland and Mediolanum (now Whitchurch, Shropshire).[2] The second document is the 7th-century Ravenna Cosmography. Again this document refers to Condate between the entries for Salinae (now Middlewich) and Ratae (now Leicester).

The Romans' interest in the Northwich area is thought to be due to the strategic river crossing and the location of the salt brines. There is archaeological evidence of a Roman auxiliary fort within the area of Northwich now known as "Castle" dated to AD 70. This and other forts in the region were built as the Romans moved north from their stronghold in Chester.

The existence of Northwich in the early mediæval period is shown by its record in the Domesday Book.

In the same Mildestuic hundred there was a third wich called Norwich [Northwich] and it was at farm for £8.


There were the same laws and customs there as there were in the other wiches and the king and the earl similarly divided the renders.
... All the other customs in these wiches are the same.
This was waste when (Earl) Hugh received it; it is now worth 35s.

The manor of Northwich belonged to the Earls of Chester until 1237 when the family line died out. Subsequently Northwich became a royal manor and was given to a noble family to collect tolls in exchange for a set rent.[3]

That salt production continued throughout the centuries and can be seen through John Leland's description of the town in 1540:[4]

Northwich is a pratie market town but fowle,
and by the Salters houses be great stakes of smaul cloven wood,
to seethe the salt water that thei make white salt of.|cited in Fred H. Crossley

Between 1642 and 1643, during the English Civil War, Northwich was fortified and garrisoned by Sir William Bereton for the Parliamentarians.

The salt beds beneath Northwich were re-discovered in the 1670s by employees of the local Smith-Barry family.[5] The Smith-Barrys were looking for coal, but instead discovered rock salt, in the grounds of the family home, Marbury Hall, to the north of Northwich. 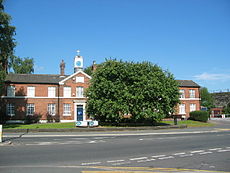 During the 19th century it became uneconomical to mine for the salt. Instead hot water was pumped through the mines, which dissolved the salt.[5] The resultant brine was pumped out and the salt extracted from the brine. This technique weakened the mines and led to land subsidence as they collapsed. Subsidence affected the town and the surrounding landscape.[5] For example, collapses in 1880 formed Witton Flash as the River Weaver flowed into a huge hole caused by subsidence.

Subsidence also allegedly accounts for many old timber-framed houses in the town centre, which were better able to withstand the movement of the ground. Some houses were built on a base of steel girders which could be jacked up to level the house with each change in the underlying ground. The town's historical link with the salt industry is celebrated in its Salt Museum, which is today located in the town's old workhouse.

In 1874, John Brunner and Ludwig Mond founded Brunner Mond in Winnington and started manufacturing soda ash using the Solvay ammonia-soda process.[6] This process used salt as a main raw material. The chemical industry used the subsided land for the disposal of waste from the manufacture of soda-ash. The waste was transported through a network of cranes and rails to the produce limebeds. This was a dangerous alkaline substance and caused the landscape to be abandoned as unusable. 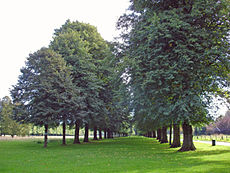 In 1975 Marbury Country Park was the first area to be reclaimed from dereliction and has become a popular recreational area. In 1987 more land was reclaimed to form Furey Wood and over later years, the council's Regeneration Unit reclaimed what is now known as Anderton Nature Park, Witton Flash, Dairy House Meadows, Witton Mill Meadows, and Ashton's and Neumann's Flashes. The area now extends to approximately 800 acres of public space known as Northwich Community Woodlands.[5]

In February 2004 a £28 million programme to stabilise the abandoned salt mines underneath Northwich was begun; Baron's Quay, Witton Bank, Neumann's and Penny's Lane were chosen because their subsidence was causing problems for the town centre. The stabilisation plan involved removing millions of litres of brine from the four mines and replacing it with a mixture of pulverised fuel ash (PFA), cement and salt. The project was completed in late 2007. 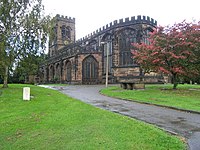 The parish church is known as St Helen Witton. It is a Grade I Listed Building. The church initially developed as a chapel of ease associated with the parish of Great Budworth to serve the local community, known as the Chapel of Witton. There is no known date for the creation of this chapel, but it is thought to have existed in the 13th century. None of this building exists in the current church. There is no documentary evidence to indicate the dates of the older parts of the current building. However stones in the fabric of the porch carry inscriptions attributed to "Ricardus Alkoke Capellanus". This name matches documents concerning land in Northwich and Lostock Gralam dated 1468, but this cannot be used to date the church accurately.[7]

It was not until 7 August 1900 that the parish of Witton (otherwise Northwich) was formed from parts of Great Budworth, Davenham and other surrounding parishes.

The Northwich Union Workhouse opened in 1837 following the Poor Law Amendment of 1834 that standardised the system of poor relief throughout Britain. The building is now the Weaver Hall Museum, housing the Salt Museum.

The Dock Road Edwardian Pumping Station is a Grade II Listed Building originally built by Northwich Urban District Council in 1913. For over 60 years it was used for pumping sewage from parts of Northwich to the Wallerscote Treatment Works. Before it was built, untreated sewage was discharged directly into the River Weaver, causing widespread pollution. 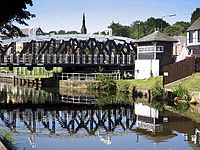 The Floatel Northwich was moored on the Weaver near the confluence of the two rivers, but was closed when the owners, The Real Hotel Company plc, went into administration in January 2009. It has since been removed. It was the United Kingdom's only floating hotel.

Northwich has been described as having a market since at least 1535, when it was described as a market town by Leland, but there is no surviving charter. The town still has a market today, which is earmarked for refurbishment as part of the Northwich Vision plans.[8]

The town's economy was dominated by the salt industry. However a list of tolls for goods crossing over Northwich bridge in 1353 shows goods coming into the town, including a wide range of carcasses, fleeces, hides and skins, cloth, fish, alcoholic drinks, cloth, dairy products, building materials, household goods, metals and glass, and millstones. This indicates a much wider economic base to mediæval Northwich than just the salt trade. Documentary evidence also exists for a mill from 1332 onwards and there is evidence for more than one mill from 1343.

Allied to the extraction of salt was a bulk chemical industry, which became concentrated at the three Imperial Chemical Industries sites at Winnington, Wallerscote and Lostock. The first industrially practical method for producing polythene was accidentally discovered at the Winnington works in 1933.[9]

Bakers Frank Roberts & Sons have been associated with the town since 1887 and continues to be based near the town at Rudheath on the A556.

There are many contemporary major employers in nearby Rudheath and Hartford, Cheshire.

The town has two key events a year. Over the August Bank Holiday Weekend Northwich Festival is held at Moss Farm Sports Complex. Featuring 4 days of music and sport with the main attraction for the Monday being the UK Strongman-North Competition.[10] The Thundersprint motorcycling event is held every May in Northwich. This event attracts over 130,000 people over the two days, and claims to be the world's biggest street bike party.

These events were joined in 2011 by the town's first Mediæval Festival, which was staged in Verdin Park over the weekend of August 13 and 14. This event, sponsored by Cheshire West & Cheshire Council as part of their efforts to promote the town centre as a destination, is planned to be an annual happening. The 2011 Northwich Mediæval Festival featured The Poor Knights of St Dysmas, God's Company of Tabor, The Freemen of Gwent, and the Knights Hospitallers of the North, as well as the Ya Raqs Eastern Dance Troupe.