Middlewich is a market town in Cheshire. It is one of the fames salt towns of the county, known as the "Cheshire wiches", along with Nantwich and Northwich.

The town is 19 miles east of the county town, Chester and three miles east of Winsford. Of its fellow salt towns, Northwich is five miles northwest and Nantwich to the south. Middlewich is therefore in the middle, and this seems likely to be the origin of its name.

There has been a settlement at Middlewich since at least the time of the Roman occupation. Middlewich is an important centre for the extraction of salt; in earlier years it was also known for its production of Cheshire cheese, silk, and its agriculture. In the present day it is known for its canals, its heritage events and its festivals.

The parish church of St Michael and All Angels dates back to the 12th century.

Middlewich also has good motorway links to the nearby cities of Manchester and Liverpool. The town's population has doubled since 1970 despite a reduction in the number of manufacturing jobs in salt and textile manufacturing, suggesting that many of the new residents live in Middlewich for reasons other than local employment.

Since 1990 there have been initiatives to increase the volume of tourism into the town, through events such as the annual folk and boat festival, the Roman and Norman festivals, and regular farmers' markets.

Middlewich is at the confluence of three rivers, the Dane, the Croco and the Wheelock. There are three canals in Middlewich, the Middlewich Branch of the Shropshire Union Canal, the Trent and Mersey Canal, and the Wardle Canal, the United Kingdom's shortest canal at 100 feet long.[1]

The town is on three major roads, the A533, A54 and A530, and it is approximately 2½ miles from junction 18 of the M6 motorway. The main westward traffic route between the motorway and Winsford, and also southbound traffic to Crewe, go through the town.

The town sits on Upper Triassic Mercia mudstone laid down with large salt deposits as part of the Cheshire plain, a boulder clay plain separating the hills of North Wales and the Peak District of Derbyshire, formed following the retreat of ice age glaciers.[2]

In the Domesday Book Middlewich is spelt "Mildestvich". Middlewich is the middle town between Northwich and Nantwich, the two other main ssalt towns, and its position may be the origin of its name.[3] The termination "wich" is the Old English wic, meaning "village" or "camp" and become associated with the salt towns which bear that name.

Middlewich was founded by the Romans, who gave it the name Salinae because of its surrounding salt deposits. It became one of the major Roman sites for salt production, an activity that was centred on the township of Kinderton, about a quarter of a mile north of the present-day parish church of St. Michael and All Angels. It has been suggested that pre-Roman salt production also occurred in the same area, but there is no supporting archaeological evidence.[4][5] Whittaker's History of Manchester claims that the Iron Age Cornovii made Kinderton their capital,[3] but it is more likely that the Cornovii inhabited Kinderton for its salt-making potential.[6][7]

Middlewich lies across the King Street fault, which roughly follows the Roman road, King Street, from Northwich to Middlewich.[5] During their occupation the Romans built a fort at Harbutts Field (SJ70216696),[9][10] and excavations to the south of the fort have found further evidence of Roman activity[11][12] including a well and part of a preserved Roman road. An excavation in 2004, in Buckley's Field,[13] also uncovered signs of Roman occupation.

Salt manufacture has remained the principal industry for the past 2,000 years, and it has shaped the town's history and geography. Before the Norman invasion of 1066, there is thought to have been one brine pit in Middlewich, between the River Croco and the current Lewin Street.[14]

In the Domesday Book the area is described as being "wasted",[14] having been cleared by Williamthe Bastard around 1070 as an "act of rage against his rebellious barons".[15] Gilbert de Venables became the first Baron of Kinderton shortly after the Norman Conquest, the title being conferred by Hugh d'Avranches, 1st Earl of Chester ("Hugh Lupus").[16]

A manor house was built to the east of the town and became the baronial seat of the Venables family. A Jacobean screen in the church of St Michael and All Angels has the carved Venables coat of arms. The title "Baron of Kinderton" is now vested in the Lord Vernon.

On 13 March 1643 the town was the scene of the first Battle of Middlewich, between the Parliamentarians, under Sir William Brereton, and the Royalists under Sir Thomas Aston.[17] The second Battle of Middlewich took place on 26 December 1643, and claimed the lives of about 200 Parliamentarians, along with a number of Royalists under the command of Lord Byron.

The population of Middlewich rose during the 19th and 20th centuries. Some of this rise is attributable to a number of parishes being combined, for example parts of Newton were added to Middlewich in 1894, with Sutton having previously been added to Newton in 1892. Some will also be due to a general increase in population of the United Kingdom, and some of the increase would have been required to provide a labour force for the increased number, and scale, of salt and chemical works in the town. In the middle of the 19th century Middlewich was described as a town with principal works being the surrounding farming district, a silk factory, and the salt works in Kinderton and Newton.[18]

In 1887 the town was described as having an antique appearance, with its principal trade being salt, along with fruit and vegetables, and small silk and heavy cotton works. The town had one bank and one newspaper.[19] By 1911 the Encyclopædia Britannica mentions the existence of chemical works and the manufacture of condensed milk.

The First World War decimated the men of the parish, quite literally; the cenotaph built near the parish church after the war lists the names of the 136 men who died in the War, representing around 10% of the male population of the town aged between 15 and 45. Forty-two of Middlewich's inhabitants lost their lives in the Second World War, and a further man in the Korean War. The Brunner Mond salt works in Brooks Lane also erected a cenotaph in memory of the 16 men from the works killed in the First World War, and the two who died during the Second World War.

In the period between the end of the First World War until shortly after the Second World War, there was extensive housebuilding in the town; a significant number of houses were built in the King Street area to the north, the area bounded between Nantwich Road and St. Anne's Road to the west, and especially in Cledford to the south. The 1970s commenced with the building of a new road, St. Michael's Way, which allowed traffic moving from east to west through the town to bypass the main shopping street, Wheelock Street. Along with the bypass there was significant remodelling of the town centre, with the old town hall and library being demolished. This bypass successfully eased the flow of traffic away from the main shopping street, but the joining of three major roads remains a bottleneck, which will be eased by a proposed eastern bypass.[20]

Since the early 1980s Middlewich has seen a significant quantity of new housing development, initially in the Sutton Lane and Hayhurst Avenue areas. New developments have recently been built on the sites of old salt workings to the south of the Roman Fort at Harbutt's Field, near the Norman Baron's moated manor house at Kinderton Manor, and on the site of the old railway station. One of the latest developments is on the old silk works next to the Big Lock public house. In common with other local towns such as Holmes Chapel, Northwich and Winsford, people are attracted to Middlewich because of its good road links via the M6 motorway and the relatively low price and availability of suitable building land.[21] 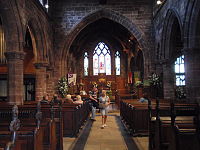 Inside St Michael and All Angels

The parish church is St Michael and All Angels. Parts of the church date back to the 12th century, although the majority was built during the 14th, 15th and 16th centuries. There was a general remodelling of the church during the 19th century, which included removing the whitewash from its interior to reveal the sandstone appearance seen today.[22]

The church was the site of fierce fighting in the First and Second Battles of Middlewich during the English Civil War.

There are churches of five Christian denominations within the town:

Middlewich has a traditional high street, with small shops on Wheelock Street and Lewin Street. There are also four supermarkets.

Historically the major employers have been the salt industry and agriculture. Salt is still manufactured at British Salt, which employs around 125 people. The close proximity to the M6 motorway has led to the creation of a large distribution and business park.

Tourism is one of the fastest growing industries in Cheshire, and Middlewich's canals are important in the promotion of tourism in the area.[23] Visitors to the 2003 Middlewich Folk and Boat Festival were estimated to have spent £2.3 million in the town over the two days of the festival.[24]

The Roman theatre in the Bull Ring

Fountain Fields on Queen Street is a traditional town park, with a number of facilities including a bowling green. It has been owned by the council since 1926.[28] 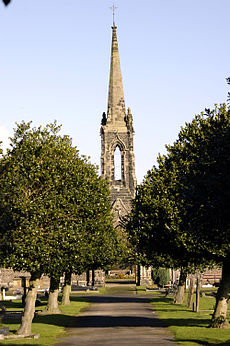 The principal landmark in Middlewich is the parish church, St Michael and All Angels, parts of which date back to the 12th century,

Other landmarks include: the Roman Theatre built on the Bull Ring on the site of the old town hall and library; and the town bridge, opened in 1931 as a replacement for an earlier bridge.[29][30] Middlewich has a town cemetery with a twin chapel dating from 1859 by Bellamy & Hardy.[31]

The Victoria technical school and library, which was opened in 1897, is a red brick and red terracotta building, "with a cupola but otherwise vaguely in the Loire style".[31] Since 1900, the building on Lewin Street has been used as offices by the town council.[29]

One mile north of the town centre along King Street lies Ravenscroft Hall, which dates from 1837.[31] 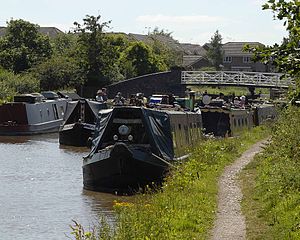 Narrowboats on the Northwich side of the Big Lock

Following a petition in 1766, the Trent and Mersey Canal was diverted from its course originally planned to provide transport to the town,[29] and now links with a branch of the Shropshire Union Canal.

The link between the two canals was opened in 1833.[32] It is actually a third canal known as the Wardle Canal; at about 100 feet in length, it is the shortest canal in the United Kingdom.