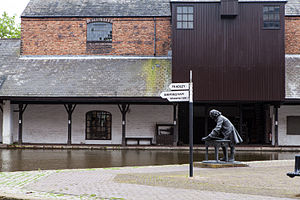 The Coventry Canal is a navigable narrow canal in the Midlands, passing through Staffordshire and Warwickshire (map).

The head of the canal is at Coventry in Warwickshire and it ends 38 miles to the north at Fradley Junction, just north of Lichfield in Staffordshire, where it joins the Trent and Mersey Canal.[1] It also has connections with the Oxford Canal, the Ashby Canal, and the Birmingham and Fazeley Canal.

Some maps show the canal as a northern and a southern section, connected by a stretch of the Birmingham and Fazeley Canal, but others show the through route all as the Coventry Canal. This reflects a complicated period of ownership and re-leasing when the Coventry Canal company was in financial difficulties during construction.

The canal runs through or past the towns of Bedworth, Nuneaton, Atherstone, Polesworth and Tamworth. It is navigable for boats up to 72-foot length, 7-foot beam and 6 foot 6" headroom. It forms part of the Warwickshire ring.

The canal starts at Coventry Canal Basin. The basin was opened in 1769 and expanded in 1788. It is situated just north of Coventry City Centre and just outside the city's inner ring road. Many of the buildings and the site were restored between 1993 and 1995. The Canal Bridge, Canal House and the warehouses are grade II listed buildings. All boats going in and out of Coventry Canal Basin have to pass through the Canal Bridge.

From the canal basin, the canal meanders north through Coventry passing under many road bridges including prominent hump-back bridges under the Foleshill Road, Foleshill through Little Heath and the Longford Road, Longford.

A few miles north of Hawkesbury, just outside Bedworth, is Marston Junction, where the Ashby-de-la-Zouch Canal starts its meandering, rural and lock-free journey towards the former coal mines at Moira; although it is now navigable only for 22 miles to Snarestone.

From Marston Junction, the Coventry canal runs north-west through Nuneaton, Atherstone and Polesworth, to Tamworth.

In a suburb of Tamworth, at Fazeley Junction, boaters can turn west towards Birmingham along the Birmingham & Fazeley Canal.

The Coventry Canal continues northwards to end at Fradley Junction where it joins the Trent and Mersey Canal. From Fazeley to a point halfway to Fradley, maps show the canal as the "Birmingham, and Fazeley canal".

The Coventry Canal Company was formed in 1768. James Brindley was commissioned to build the canal, and work started on it in December that year. Due to the high standards of construction demanded by Brindley, the canal company ran out of money by the time the canal had reached Atherstone in 1769, and Brindley was replaced by Thomas Yeoman.

Thomas Dadford advised on the Canal's aqueduct over the River Tame (now known as Tame Aqueduct) in 1784 and in June 1785, Thomas Sheasby was awarded the contract to connect the Coventry Canal to the Trent and Mersey Canal.

Although the canal reached the Birmingham and Fazeley Canal at Fazeley, the final Parliament-approved stretch to the Trent and Mersey at Fradley was not finished until 1789.

The Trent and Mersey company, and the Birmingham and Fazeley company, anxious to allow through traffic from Birmingham to the Trent and Mersey canal, gained permission to complete and operate the approved but unbuilt section from Fazeley to Fradley. The B&F worked North from Fazeley, and the T&M worked south from Fradley. The full length from Coventry to Fradley was opened in 1789.

The middle section remained part of the Birmingham and Fazeley Canal, but the Coventry Canal company later bought the northern section, nowadays sometimes referred to as Coventry Canal (detached portion).

The Coventry canal was a vital trade artery for many years. In particular, it was part of the Birmingham-London route via the B&F Canal, Coventry Canal, Oxford Canal, and River Thames.

When the Grand Junction Canal and some smaller companies (which much later merged to form the Grand Union Canal company) opened a direct rival route from Birmingham to London, via Warwick, Napton, Braunston, and Bletchley, trade still remained high on the Coventry. This was partly because of the work done by the Oxford company to shorten its route north of Braunston, and because Grand Junction traffic using the Braunston/Fazeley route avoided the high tolls charged by the Oxford canal company on its Braunston-Napton section (which was also part of the new route).