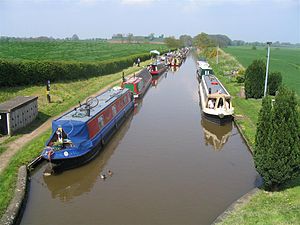 The Shropshire Union Canal is a canal largely in Shropshire, built under the direction of the great engineer Thomas Telford to carry the industrial products of the Black Country to the sea, and to carry coal from the mines of Shropshire and North Wales. The canal has wider branches known as the Llangollen Canal and the Montgomery Canal, all part of the same system.

The main branches of the canal runs through Shropshire, Staffordshire and Cheshire. It also serves as a connection between the canal system of the Black Country, joining at Wolverhampton, and the River Mersey and the Manchester Ship Canal at Ellesmere Port, Cheshire, 66 miles distant.

The "Shropshire Union main line" runs south-east from Ellesmere Port on the River Mersey to the Staffordshire and Worcestershire Canal at Autherley Junction in Wolverhampton. Other links are to the Llangollen Canal (at Hurleston Junction), the Middlewich Branch (at Barbridge Junction), which itself connects via the Wardle Canal with the Trent and Mersey Canal, and the River Dee (in Chester).

With two connections to the Trent and Mersey (via the Middlewich Branch and the Staffordshire and Worcestershire Canal), the Shropshire Union is part of an important circular and rural holiday route called the 'Four Counties Ring'.

The Shropshire Union main line was the last trunk narrow canal route to be built in the Midlands. It was not completed until 1835 and was the last major civil engineering accomplishment of Thomas Telford.

The name "Shropshire Union" comes from the amalgamation of the various component companies (the Ellesmere Canal, Birmingham and Liverpool Junction Canal, Montgomeryshire Canal) that came together to form the Shropshire Union Railways and Canal Company. The main line between Nantwich and Autherley Junction was almost built as a railway although eventually it was decided to construct it as a waterway.

The canal starts from Ellesmere Port on the River Mersey traversing the Wirral peninsula to Chester. This stretch, which was completed in 1797, was originally part of the unfinished Ellesmere Canal. The industrial waterway was intended to connect the Port of Liverpool on the River Mersey to the River Severn at Shrewsbury via the North East Wales Coalfields. However, only eight years after the completion of the contour canal between Netherpool and Chester, the proposed project became uneconomical. This meant the planned 16-mile mainline from Chester to Trevor Basin near Wrexham was never built. Instead the northern Wirral section was joined to the pre-existing Chester Canal; eventually becoming part of the Shropshire Union network.

In Chester, from the top of the arm leading down to the Dee, the Shropshire Union follows the old Chester Canal built in 1772 to connect Chester and Nantwich. The canal passes alongside the city walls of Chester in a deep, vertical red sandstone cutting. After Chester, there are only a few locks as the canal crosses the nearly flat Chester Plain, passes Beeston Castle, and the junctions at Barbridge and Hurleston and arrives at Nantwich basin, the original terminus of the Chester Canal.

The two junctions on this stretch are very important links in the connected canal network.

The odd angle between Nantwich basin and the next stretch of the Shropshire Union shows that the journey southwards is on a newer (and narrow) canal originally constructed as the narrow Birmingham and Liverpool Junction Canal to connect Nantwich, at the end of the Chester Canal, to the Staffordshire and Worcestershire Canal at Autherley Junction, near Wolverhampton. An important lost link can be seen at Norbury Junction, where a branch (1841) ran south-west through Newport to connect with the Shrewsbury Canal at Wappenshall Junction.

After Nantwich basin, a long sweeping embankment incorporating an aqueduct carries the canal across the main A534 Nantwich-Chester road. The canal then has to climb out of the Cheshire Plain by means of a flight of 15 locks at Audlem. The canal passes through the eastern suburbs of the town of Market Drayton in Shropshire. Further south there are substantial lengths of embankment through the Staffordshire village of Knighton. There is an aqueduct south of Norbury Junction and deep cuttings at Loynton near Woodseaves (Staffordshire), Grub Street, and at Woodseaves (Shropshire).

The canal then continues as the remarkable mile-long very tall Shelmore Embankment. Repeated soil slippage during construction meant that this was the last part of the B&L Junction Canal to be opened to traffic. The lengthy embankment is equipped with flood gates at both ends to prevent loss of water should the canal be breached in this area. During Second World War these locks were kept closed at night because of the risk of bomb damage.

At Gnosall the canal enters the 81-yard Cowley Tunnel. Originally the tunnel was planned to be 690 yards long, but after the rocky first 81 yards, the ground was unstable, and the remaining length was opened out to form the present narrow and steep-sided Cowley Cutting.

At Wheaton Aston, the canal climbs its last lock to reach the summit level, fed by the Belvide Reservoir just north of Brewood (pronounced "Brood"). North of the reservoir, the canal passes by Stretton Aqueduct over Watling Street (the A5 road).

The Shropshire Union terminates at Autherley Junction on the Staffs and Worcester Canal. Immediately before the junction is a very shallow stop lock built to prevent the loss of water to the new rival canal from the pre-existing Staffordshire and Worcestershire Canal. Unusually, the B&L Junction canal's summit level was designed to be a few inches lower than the older canal, so the newer canal gains a small amount of water each time the lock is cycled (the reverse of the practice usually insisted on by canal companies as a condition for not opposing the construction of a newer one).

The link with the Staffs and Worcester provides a choice of onward journeys:

The Shropshire Union Railways and Canal Company was formed in 1846. The Ellesmere and Chester canals had amalgamated in 1813, and the absorption of the Birmingham and Liverpool Junction Canal by the Ellesmere and Chester Company was authorised by an Act of Parliament passed in 1845. A further Act, passed in 1846, changed the name of the company to the Shropshire Union Railways and Canal Company[1] and authorised the acquisition of the Shrewsbury Canal and other canals in the east Shropshire network (linking modern-day Telford with the River Severn to the south at Coalport). Then (in 1847), the latter was taken over by the London and North Western Railway Company, which allowed the Shrewsbury Canal and the branch from Norbury Junction to decline.

On 7 September 1945, the bank of the Llangollen branch of the canal failed near Sun Bank Halt in Denbighshire. Escaping water washed away a 40-yard section of the trackbed of the Ruabon to Barmouth railway line. A Great Western Railway mail and freight train was derailed, killing one person and injuring two others. The train's consist was entirely destroyed in the ensuing fire, with the exception of a brake van.[2]

The canal in Chester is promoted by Chester Canal Heritage Trust.