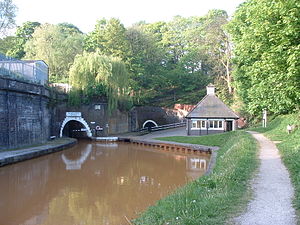 North End of both tunnels, the Brindley tunnel is the one on the right.

Harecastle Tunnel is a canal tunnel on the Trent and Mersey Canal at Kidsgrove in Staffordshire. It is made up of two separate and parallel tunnels described as Brindley (2,880 yards) and the later Telford (2,926 yards) after the engineers that constructed them. Today only the Telford tunnel is navigable. The tunnel is only wide enough to carry traffic in one direction at a time and boats are sent through in groups, alternating northbound and southbound. Ventilation is handled by a large fan at the south portal. 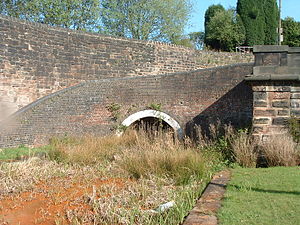 South portal of the Brindley Tunnel

The Brindley tunnel was constructed by James Brindley between 1770 and 1777. Brindley died during its construction. At the time of its construction it was one of the two longest canal tunnels in Britain, together with Norwood tunnel, its twin Brindley, bore on the Chesterfield Canal.[1]

To construct the canal, the line of the tunnel was ranged over the hill and then fifteen vertical shafts were sunk into the ground. It was from these that heads were driven on the canal line. A major problem was the change in the rock type which ranged from soft earth to Millstone Grit. The construction site was also subject to flooding regularly, a problem which was overcome by the construction of steam engines to operate the pumps. Stoves were installed at the bottom of upcast pipes to overcome the problem of ventilation.[2]

The tunnel had no towpath, and so boatsmen had to leg their way through the tunnel, lying on the roof of their boat and pushing on the sides of the tunnel with their feet. It could take up to three hours to get through the tunnel. The boat horses were led over Harecastle Hill via 'Boathorse Road'. A lodge (Bourne Cottage) was built by the side of the squire's drive at the point that the boat children crossed it, to prevent them straying up towards Clough Hall.

The tunnel was 12 feet tall at its tallest point and was nine feet wide at its widest, which proved to be too small in later years.[3] The tunnel suffered subsidence in the early 20th century and was closed after a partial collapse in 1914.[4] Inspections of the disused tunnel continued until the 1960s, but since that time, there has been no attempt to investigate the interior of the tunnel at any significant distance from the portals.

The gated portals can still be seen from the canal, although it is no longer possible to approach the mouth of the tunnel in a boat.

In recent times, water entering the canal from the Brindley tunnel has been blamed for much of the prominent iron ore (responsible for the rusty colour of the water) in the canal, and there are proposals to install filtering (possibly using reed beds) at the northern portal. 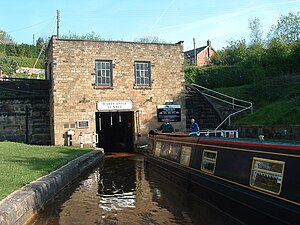 South portal of the Telford Tunnel

Due to the amount of traffic and the slow process of legging, the Harecastle Tunnel was becoming a major bottleneck on the canal. It was decided to commission a second tunnel to be built by Thomas Telford. Due to advances in engineering, it took just three years to build, and was completed in 1827. It had a towpath so that horses could pull the boats through the tunnel. After its construction it was used in conjunction with the Brindley tunnel, with each tunnel taking traffic in opposite directions.

Between 1914 and 1954 an electric tug was used to pull boats through the tunnel. In 1954 a large fan was constructed at the south portal. While all the boats are within the tunnel an airtight door is shut and all the air is pulled through the tunnel by the fan. This allows diesel boats to use the tunnel without suffocating the boaters. Today the journey takes about 30–40 minutes.

In the late 20th century, the Telford tunnel also began to suffer subsidence, and was closed between 1973 and 1977.[5] The towpath, long disused, was removed, allowing boats to take advantage of the greater air draft in the centre of the tunnel.

A series of smaller canal tunnels are joined to the Telford tunnel. These tunnels connected to coal mines at Golden Hill and allowed both the drainage of the mines and the export of coal directly from the mines to the canal tunnel without the necessity of first hauling it to the surface. Small boats of ten tons' capacity were used in this endeavour.[6]

The Ghost of Harecastle Tunnel - The Kidsgrove Boggart

According to legend a young woman was decapitated in the Telford Tunnel in the 1800s and her body thrown into Gilbert's Hole, a coal landing stage within the tunnel. The man had hacked the woman's head from her shoulders with a piece of slate until it was removed.

It is believed that she now haunts Harecastle Tunnel, either in the form of a headless woman, or a white horse, and her appearance used to forewarn of disaster in the local mines. Some boatmen took long detours to avoid the tunnel, and today the tunnel keepers relate tales of occasional mismatches in the number of boats going in and coming out. Such tales are, however, fanciful, as any such discrepancy would result in a major search operation.

In fact there is no record of any such murder, and the story seems to have been inspired by the murder of Christina Collins in similar circumstances near Rugeley. The association with another canal ghost 'Kit Crewbucket', who haunts the Crick Tunnel, would also seem to be spurious. Locally the Kidsgrove boggart is known as the Kickrew Buggart because of the local dialect in which Kidsgrove is called kickroo or Kickrew as the dialect is not written down the spelling is optional.