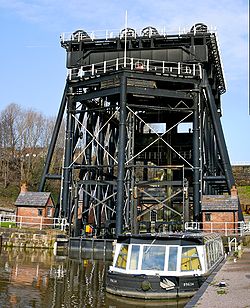 The Anderton Boat Lift is a two caisson lift lock near the village of Anderton, Cheshire, which provides a 50-foot vertical link between two navigable waterways: the River Weaver and the Trent and Mersey Canal.

The structure is designated as a Scheduled Monument.[1]

Built in 1875, the boat lift was in use for over 100 years until it was closed due to corrosion in 1983. Restoration started in 2001 and the boat lift was re-opened in 2002. The lift and associated visitor centre and exhibition are operated by the Canal & River Trust. It is one of only two working boat lifts in the United Kingdom; the other being the modern Falkirk Wheel in Stirlingshire. 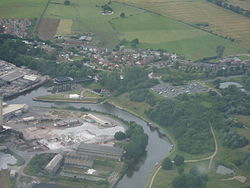 Salt has been extracted from rock salt beds underneath the Cheshire Plain since Roman times, and by the end of the 17th century a major salt mining industry had developed around the Cheshire "salt towns" of Northwich, Middlewich, Nantwich and Winsford. This industry required a modern transport route, which was provided by the River Weaver Navigation, an industrial canalisation of the River Weaver, opened in 1734.

The opening of the Trent and Mersey Canal in 1777 provided a second route close to the Weaver Navigation for part of its length, but extended further south to the coal mining and pottery industries around Stoke-on-Trent.[2]

Rather than competing with each other, the owners of the two waterways decided it would be more profitable to work together. In 1793, the Weaver Navigation Trustees excavated a basin on the north bank of the Weaver at Anderton that took the river to the foot of the escarpment of the Trent and Mersey Canal, fifty feet above. Facilities were built to trans-ship goods between the waterways, including two cranes, two salt chutes and an inclined plane that was possibly inspired by the much larger Hay Inclined Plane at Coalport. The facilities were extended when a second quay was built in 1801 and a second entrance to the basin was constructed in 1831.[3]

By 1870 the Anderton Basin was a major interchange for trans-shipping goods in both directions, with extensive warehousing, three double inclined planes and four salt chutes. Trans-shipment was time-consuming and expensive, and the Trustees of the Weaver Navigation decided a link between the waterways was needed to allow boats to pass directly from one to the other. A flight of locks was considered but discarded, mainly because of the lack of a suitable site and the loss of water that would have resulted from using them. In 1870 the Trustees proposed a boat lift between the waterways at the Anderton Basin. The Trustees approached the North Staffordshire Railway Company, owners of the Trent and Mersey Canal, to ask for a contribution towards the cost, but when this approach was unsuccessful the Trustees decided to fund the project themselves.[4] 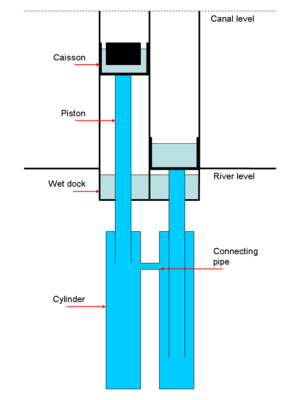 The Trustees' Chief Engineer, Edward Leader Williams, settled on a design involving a pair of water-filled caissons that would counterbalance one another and require relatively little power to lift boats up and down. A similar boat lift on the Grand Western Canal, completed in 1835, used chains to connect the caissons via an overhead balance wheel. It had a solid masonry superstructure to support the weight of the loaded caissons. Leader Williams realised that if he used water-filled hydraulic rams to support the caissons their weight would be borne by the rams and their cylinders, buried underground, and a much lighter superstructure could be used. He may have been inspired by inspecting a hydraulic ship lift and graving dock at the Royal Victoria Dock on the Thames below London, designed by experienced hydraulic engineer Edwin Clark.[4]

Edwin Clark was appointed as principal designer. At that time the Anderton Basin consisted of a cut on the north bank of the Weaver surrounding a small central island, and Clark decided to build the boat lift on this island. The wrought iron caissons were 75 feet long by 15 feet 6" wide by 9 feet 6" deep, and could each accommodate two 72-foot narrowboats or a barge with a beam of up to 13 feet Each caisson weighed 90 tons when empty and 252 tons when full of water. Each caisson was supported by a single hydraulic ram consisting of a hollow 50-foot long cast iron vertical piston with a diameter of 3 feet, in a buried 50-foot long cast iron vertical cylinder with a diameter of 5 feet 6". At river level the caissons sat in a water-filled sandstone lined chamber. Above ground the superstructure consisted of seven hollow cast iron columns which provided guide rails for the caissons and supported an upper working platform, walkways and access staircase. At the upper level the boat lift was connected to the Trent and Mersey canal via a wrought iron aqueduct 165 feet long, with vertical wrought iron gates at either end.[5]

In normal operation the cylinders of the hydraulic rams were connected by a pipe 5 inches in diameter that allowed water to pass between them, thus lowering the heavier caisson and raising the lighter one. To make adjustments at the start and end of a lift either cylinder could be operated independently, powered by an accumulator or pressure vessel at the top of the lift structure, which was kept primed by a 10 hp steam engine. If necessary, the steam engine and accumulator could operate either hydraulic ram independently to raise the caissons, although in this mode it took about 30 minutes to raise a caisson, as opposed to three minutes in normal operation.[5]

In July 1872, Royal Assent was granted for the Weaver Navigation 1872 Act, which authorised the construction of the boat lift. Work started before the end of 1872 and took 30 months. The Anderton Boat Lift was formally opened to traffic on 26 July 1875. The total cost was £48,428.[5]

For five years the boat lift operated successfully, the longest closures being during spells of cold weather when the canal froze over. In 1882 a cast iron hydraulic cylinder burst while the caisson it supported was at canal level with a boat in it. The caisson descended rapidly, but water escaping from the burst cylinder slowed the rate of descent and the water-filled dock at river level softened the impact. No-one was hurt and there was no damage to the lift's superstructure. As a precaution, tests were carried out on the second hydraulic cylinder. During these tests the second cylinder failed too. As a result the boat lift was closed for six months while sections of both cylinders were replaced and the connecting pipework, which was thought to have contributed to their failure, was redesigned.[6]

The volume of traffic through the lift grew steadily through the 1880s and 1890s, but the hydraulic cylinders continued to cause problems. The gland of one cylinder (where the piston travelled through the cylinder wall) was temporarily repaired in 1887 and replaced in 1891, and the gland of the other cylinder was replaced in 1894. The main cause for concern was corrosion of the pistons. The use of canal water as a working fluid in the hydraulic system and the immersion of the pistons in the wet dock at river level led to corrosion and "grooving" of the pistons. Attempts to repair the grooves with copper made matters worse as it reacted electrolytically with the acidic canal water and hastened corrosion of the surrounding iron. In 1897 the lift was converted to use distilled water as its working fluid, slowing corrosion, but not stopping it completely. Over the next few years maintenance and repairs took place with increasing frequency, requiring complete closure of the lift for several weeks or a period of reduced and slower operation with a single caisson.[7]

By 1904 the Weaver Navigation Trustees faced the prospect of closing the boat lift for a considerable period to repair the hydraulic rams. Their Chief Engineer, Colonel J. A. Saner, looked at alternatives to hydraulic operation, proposing electric motors and a system of counterweights and overhead pulleys that would allow the caissons to operate independently of each other, above ground for easier maintenance and needing fewer attendants.[8] 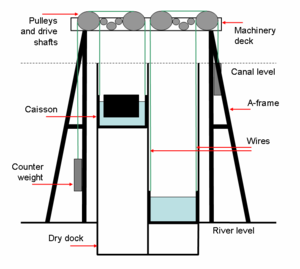 Conversion was carried out between 1906 and 1908. As Saner had promised, the lift was only closed for three periods during these two years, for a total of 49 days. The converted lift was formally opened on 29 July 1908 (although one caisson had been carrying traffic on electrical power since May 1908 while the second caisson was converted).[8]

After conversion to electrical operation the boat lift was operated successfully for 75 years. Regular maintenance was still necessary; for example, the wire ropes supporting the caissons suffered from fatigue from the repeated bending and straightening as they ran over the overhead pulleys and had to be replaced frequently. However, maintenance was simpler than before the conversion because the mechanism of the electrical lift was above ground. Maintenance was also less expensive because the caissons were now designed to be run independently, allowing most maintenance to be carried out while one caisson remained operational and thus avoiding the need to close the lift entirely.

During 1941 and 1942 the hydraulic rams of the original lift, which had been left in place in a shaft beneath the dry dock, were removed to salvage the iron.[9] During the 1950s and 1960s commercial traffic on British canals declined. By the 1970s the lift's traffic was almost entirely recreational and the lift was hardly used during winter months.[10]

The new superstructure was susceptible to corrosion and the entire lift was painted with a protective solution of tar and rubber that had to be renewed every eight years or so. During repainting in 1983 extensive corrosion was found in the superstructure, and it was declared structurally unsound and closed.[11]

During the 1990s British Waterways carried out preliminary investigations before launching a restoration bid. It was originally intended to restore the lift to electrical operation but after consultation with English Heritage, in 1997 it was decided to restore the lift to hydraulic operation, but using hydraulic oil rather than water so as to avoid the rusting that had cursed the original hydraulic system.

Restoration began in 2000 and the lift was re-opened to boat traffic in March 2002. The site now includes a two-storey visitor centre and exhibition building with a coffee shop and information and films about the history of the lift. The visitor centre incorporates the new lift control centre. Although a modified version of the original hydraulic system was reinstated, the 1906–1908 external frame and pulleys have been retained in a non-operational role. The weights that used to counterbalance the caissons were not rehung, but have been used to build a maze in the grounds of the visitor centre.[11]