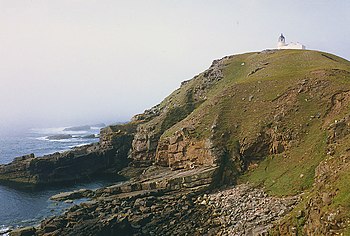 Stoer Head is a headland north of Lochinver and the township of Stoer in Sutherland, marking the northern entrance to the Minch. A lighthouse, the Stoer Head Lighthouse, stands on the point.

The peninsula is about four miles long and two miles wide. It has a number of scattered, small settlements including Culkein, Balchladich and Achnacarnin. The lighthouse is at the end of a track three miles long which branches off the B869 Lochinver to Unapool road.[1] Further North up the coast are the Old Man of Stoer and the Point of Stoer, which can easily be reached from the lighthouse on foot.[1][2]

Around 10,000 visitors visit the lighthouse each year (necessitating the construction of a public toilet in 2013).[3] The two keepers' cottages are now holiday homes.[4]