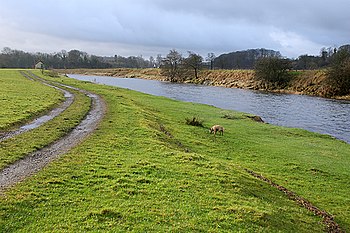 The Ribble Way and the river at Great Mitton, Lancashire

The Ribble Way is a long-distance walk between the Lancashire coast and the Yorkshire Dales, largely following the course of the River Ribble. [1]

If followed upstream, the route begins in Longton and ends at the source of the Ribble at Gayle Moor near Ribblehead, it is around 72 miles in length.[2]

The route passes through a variety of landscapes including tidal marsh, open moorland and limestone gorges. It begins to the south of the Ribble estuary, the route then runs through Preston and on to the historic town of Clitheroe.[1] Next it heads up into the Pennines to reach the river’s source on remote Cam Fell.

The idea of opening a walk along the Ribble called 'the Ribble Way' was first suggested back in 1967 at the inaugural meeting of the Preston and Fylde branch of the Ramblers' Association. The Guardian reported in 1972 that the Ramblers Association were planning Britain's first riverside long footpath called the Ribble Way. At that time, the route being discussed was 64 miles from the estuary of the Ribble at Walmer Bridge close to Preston to its source near the farmhouse of Far Gearstones in the fells in the West Riding of Yorkshire; just 28 miles of the planned route though was designated as rights of way.[3] The idea eventually attracted official support and was opened in 1985.

The Ribble Valley is an area of 240 square miles of natural beauty from the north-west coast to the Lake District. 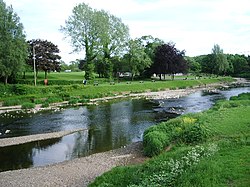 The Ribble by Clitheroe

The official start of the Ribble Way downstream is the Dolphin Inn on Marsh Lane in Longton.[4] From here it heads east inland to run through the centre of the City of Preston along the riverside, and out of the city up the river. It does not hug the wide meanders of the Ribble here, but in part follows an ancient Roman road to Ribchester.

Above Ribchester the route follows closely by the river (swinging out to find a bridge across the River Hodder at Lower Hodder Bridge and over the Ribble itself at Great Mitton, before coming to Clitheroe, at the edge of the Pennine moors.

Up into the hills, the path crosses the river at Chatburn, thus entering Yorkshire, and from here the path runs through the West Riding. It crosses the Ribble again at Sawley (by which time both banks are in Yorkshire), runs along the edge of Gisburn Park and follows the river due north, through Paythorne, by Halton West and into the sparse lands of Upper Ribblesdale eventually to the town of Settle. 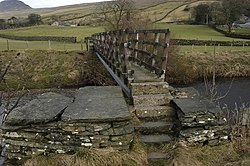 From Settle the path continues northwards upstream to Stainforth then Horton in Ribblesdale ad over the moors beside the Gayle Beck, the Ribble's headwater, to Gayle Moor and the source of the river.

The Way can be walked in four days. For a more leisurely stroll over a week, the suggestion has been made of seven easy day-stages:[6] 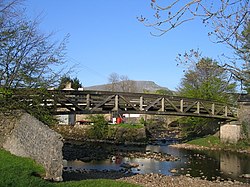 The Footbridge at Horton in Ribblesdale 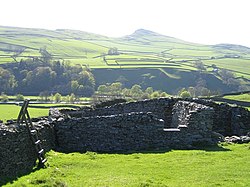 By the way at Stainforth

Towns and villages on the route

Towns and villages long the route include:

After this, the route joins the Dales Way[5]