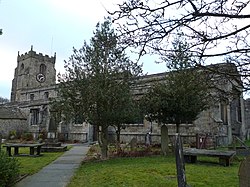 The church of St Alkelda

Giggleswick is a village and parish in the Staincliffe Wapentake of the West Riding of Yorkshire. It lies on the B6480 road, less than a mile north-west of the town of Settle and divided from it by the River Ribble. It is the site of Giggleswick School.

A Dictionary of British Place Names contains the entry:

The village is served by Giggleswick railway station which provides services to Leeds in one direction and Lancaster and Morecambe in the other. There are five trains a day in each direction.

Close to the station and opposite the Craven Arms Hotel (formerly the Old Station Inn) is the Plague Stone.[4] This has a shallow trough, which in times of plague was filled with vinegar to sterilize the coins that were left by townspeople as payment for food brought from surrounding farms.[5] The stone was moved a short distance from its original site when the Settle bypass was built.

The parish church is dedicated to St Alkelda, an obscure Anglo-Saxon saint associated with the Yorkshire town of Middleham. The building dates mostly from the 15th century, but carved stones discovered during the restoration of 1890–1892 indicated that a building existed on the site before the Norman Conquest.[6]:p.222 It has been designated by English Heritage as a Grade-I listed building.[7] The restoration was carried out by the Lancaster architects Paley, Austin and Paley, and included replacing the roof, removing the gallery, rebuilding the vestry, and reseating, replastering and reflooring the church.[8]

Richard Whiteley of Channel 4's Countdown was a pupil at Giggleswick School.[9] In his will he left the school £500,000, which was used to build a new theatre named after him.[10] Russell Harty was an English teacher at the same time that Whiteley attended as a pupil.[9] The operatic soprano, Sarah Fox, was born in the village and attended Giggleswick School.[11] The Star Wars actor Anthony Daniels also attended the school.[12] The film and stage actor Clarence Blakiston (1864–1943) was born here, as was Henry Maudsley, the pioneering British psychiatrist, at a farm outside Giggleswick in 1835. The Victorian-era actor Sir John Hare was born here in 1844.[13] Professor Sir Nevill Francis Mott, who won the Nobel prize in physics in 1977, was born in Leeds, and brought up in Giggleswick.

Giggleswick is notable amongst rock climbers for a limestone crag, retro-bolted with many sports routes during 2005 and 2006. The crag is opposite Settle Golf Club on the B6480, north of Giggleswick.

An episode of the radio comedy The Shuttleworths was set in Giggleswick.[14] Comedy writers Ray Galton and Alan Simpson used the town as their emblem of a travelling actor's date with obscurity in Hancock's Half Hour, The Train Journey episode, broadcast on 23 October 1959.[15][16] Les Dawson did the same, in 1975, in Dawson's Weekly.[17] In 1989, the TV series Capstick's Law, focused on a family law firm in the 1950s, was filmed using Russell Harty's old cottage as a venue.[18] The TV series 24seven was filmed at Giggleswick School.[19]

Among few observers of a 24-second solar eclipse in 1927 were members of the Astronomer Royal's expedition to Giggleswick.[20]