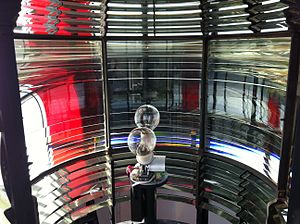 The Commissioners of Irish Lights form the body that serves as the General Lighthouse Authority for the whole island of Ireland plus its adjacent seas and islands. As the Irish lighthouse authority it oversees the coastal lights and navigation marks provided by the local lighthouse authorities; the county councils and port authorities.

The Commissioners are funded by light dues paid by ships calling at ports in the British Isles; the dues are calculated by tonnage and pooled into the General Lighthouse Fund administered by the (British) Department for Transport and distributed to the three lighthouse authorities: the Commissioners of Irish Lights the Northern Lighthouse Board and Trinity House. This pooled fund recognises that a large volume of shipping, typically transatlantic, relies on the lights provided by the Irish Commissioners without putting into Irish ports.

Signal fires to guide shipping have long existed. Hook Head is the oldest continuous (with some interruptions) light in Ireland, it was originally a signal fire or beacon tended by the monk Dubhán in the fifth century.[1] Monks continued to maintain the light until the Cromwellian conquest of Ireland in 1641.

King King Charles II re-established the lighthouse in 1657. He granted a patent for the erection of six lighthouses to Robert Reading, some replacing older lighthouses,[2] at Hook Head, Baily Lighthouse at Howth Head, Howth sand-bar, Old Head of Kinsale, Barry Oge's castle (now Charles Fort, near Kinsale), and the Isle of Magee.

In 1704 Queen Anne transferred the lighthouses around the Irish coast to the Revenue Commissioners. 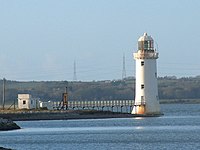 The Commissioners of Irish Lights were established under an Act of the Parliament of Ireland passed in 1786 and entitled An Act for Promoting the Trade of Dublin, by rendering its Port and Harbour more commodious (26 Geo. III, c. xix). Lighthouses were not included until the 1810 Act of the Parliament of the United Kingdom. These Acts, as confirmed by the Irish Lights Commissioners (Adaptation) Order, 1935, remain the legislative basis for the Commissioners.[3]

Irish Lights has moved its headquarters from Dublin to a purpose-built new building in Harbour Road in Dún Laoghaire.

The Commissioners currently have only one light tender[4] in service named ILV Granuaile. The hull was built at Galaţi shipyard in Romania, in 2000 and fitted out at Damen Shipyards in the Netherlands.[5] She is registered in Dublin and has a 2,625 gross tonnage, has a length overall of 261 feet and a beam of 52 feet. She is the third vessel named Granuaile to have served the Commissioners: Granuaile II was in service between 1970 and 2000, and she was preceded by the first Granuaile from 1948 to 1970. Because of the automation of lighthouses, and the extensive use of helicopters, the Commissioners now need only one tender in service. The ship has diesel electric propulsion and is extremely manoeuvrable, and is therefore ideal for her role in maintaining the automatic navigation buoys in Irish waters. In 2003 she was involved in the recovery of the fishing boat Pisces, which sank off Fethard, County Wexford, in July 2002.

Commissioners of Irish Lights is a cross-border body, with its headquarters in Dublin. The current flag of the CIL features lightships and lighthouses between the arms of the St Patrick's Cross.[6] The St. George's Cross was used until 1970.[7] The Commissioners' vessels in Northern Ireland fly the Blue Ensign defaced with the Commissioner's badge and those in the Republic fly the Irish tricolour.[6]