The tower and dwellings were built in the 1880s. They are of rubble masonry quarried on the island, with granite dressings quarried near Newry. The tower is stuccoed in Portland cement.

A light station was established on neighbouring Light House Island in the early 18th century and a lighthouse built there in 1815, though it had become inactive by 1884 when it lighthouse was abandoned in favour of the Mew Island Lighthouse (and now only the ruined stump of the 52-foot stone tower remains on that island). The bird observatory of today is the rebuilt lighthouse keeper's house.

The Mew Island Lighthouse was built and lit in 1884. It was given a light and a fog signal

The lighthouse was converted to automatic operation with the lighthouse keepers permanently withdrawn in 1996.

The siren fog signal was in duplicate, the air compressors were driven by Crossley 8 HP Otto gas engines and each set had a wrought iron air receiver and two sirens, one high note and one low, operated at 40lbs per square inch. The character of the signal was a four second blast low note, twelve seconds silence, four seconds blast high note, one hundred seconds silence. The signal was improved in 1899 by replacing the two Crossley compressor sets with three Crossley 13 HP engines with a 14" diameter, 21" stroke air compressing cylinder. The new siren was repositioned under the balcony of the tower instead of on top of the engine room roof. 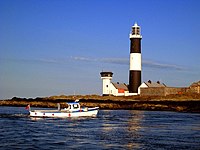 Two further changes took place with the fog signal machinery in 1929 when the siren was replaced by a diaphone giving 4 blasts every 30 seconds positioned on the lantern balcony and three single cylinder Petten oil engines drove Reavell rotary compressors. In 1948 three Ruston and Hornsby 24 hp, 5YHR oil engines drove Reavell DSA9 compressors. From 1978 the light was exhibited in poor visibility when the fog signal was sounding.

When built, the lighthouse was given its own gas generating station, to create gas from coal. In 1928 the gas plant was discontinued, and paraffin vapour burners were used instead of coal gas.

At this time too the massive triform optic was removed and replaced by a biform (two tier) optic transferred from Tory Island. (The original optic had been giving trouble for some time.). The character was altered to four flashes every half minute. Paraffin gave way to electric lamps on 15 July 1969 when the intensity of the light was increased giving a range of 30 nautical miles. The duration of the flash was decreased to 0.2 seconds.

A radiobeacon was established on 8 August 1949.

Repairs to the tower were carried out from September 1953 to January 1954 when the tower which had always been painted black acquired a 27 foot deep white band approximately half way up. The lantern was painted white.

The keepers' shore dwellings at Donaghadee were discontinued and sold in October 1957 and the keepers then lived in homes of their own, travelling to and from Donaghadee for their tours of duty on the island, carried out the to the isle by local boatmen. From 14 July 1981, the Keepers on Mew Island monitored the South Rock Automatic Lightfloat situated twenty miles to the south, off the County Down coast.

In June 1991, the diaphone fog signal service at the station was permanently discontinued. A radar responder beacon (Racon) was established at Mew Island on 1st March 1993.

The lighthouse was converted to automatic operation and, as a consequence the lighthouse keepers were permanently withdrawn from the station on 29 March 1996 and is now monitored from Dun Laoghaire in County Dublin.

In 2014, the biform optic, the lens carriage and lens, were replaced.

Mew Island's optic, the lens carriage with the lenses, was removed and replaced in 2014, but has been preserved. This is one of the largest optics of its kind ever built in the world. Created for installation of the original tri-form optic in 1884, it weighs 10 ton and stands 23 feet tall. It has been acquired for permanent display in Belfast as a unique heritage object with significance to the city's maritime wealth and industrial past.

The Titanic Foundation and the Commissioner of Irish Lights have been working together to bring the optic to a museum in the city's 'Titanic Quarter', with the aid of a great deal of taxpayers' money.