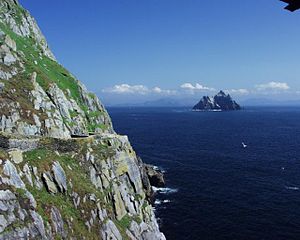 The Skellig Islands (Irish: Na Scealaga), once known as the Skellocks, are two small, steep, and rocky, uninhabited islands lying about 8 miles west of Bolus Head on the Iveragh Peninsula in County Kerry. They are famous for their thriving gannet and puffin populations, and although they appear uninhabitable, Skellig Michael is world-renowned as the site of an early Christian monastery, which is now a UNESCO World Heritage Site. 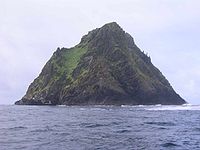 Skellig Michael, also known as Great Skellig, is the larger of the two islands. It rises sheer from the sea and has two peaks, rising to over 755 feet above sea level.

Close to the south summit is a sixth-century Christian monastery, perched at 525 feet above sea level on a ledge close to the top of the peak. Great Skellig is designated as a UNESCO World Heritage Site. 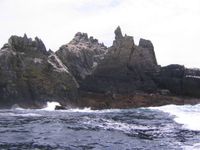 Little Skellig, the smaller island is closed to the public, and holds Ireland's largest and the world's second-largest Northern Gannet colony, with almost 30,000 pairs. It is about a mile east-north-east of Great Skellig.

Both of the Skellig islands are well known for their seabird colonies, and together comprise one of the most important seabird sites in Ireland, both for the population size and for the species diversity.

The surrounding waters teem with life also. Grey Seals are common, and Basking Sharks, Minke Whales, Dolphins, Beaked Whale, and Leatherback Turtles have also been recorded. The islands have many interesting recreational diving sites due to the clear water, an abundance of life, and underwater cliffs down to 200 feet.

The Skellig islands are featured prominently in a sequence at the end of the 1976 German film Herz aus Glas (Heart of Glass) by Werner Herzog.

Canadian singer/songwriter Loreena McKennitt wrote the song "Skellig" for her 1997 album The Book of Secrets.

Tristan Jones, in his sailing/travel novel "ICE!" writes of a visit to the Skellig Isles en route from England to North America in 1961.[1]