Fastnet Rock or simply Fastnet is a small islet in the Atlantic Ocean south of County Cork; it is the most southerly point of the Republic of Ireland. The islet lies 4 miles southwest of Cape Clear Island and 8 miles from the Irish mainland.[1] Due to its location, Fastnet was known as 'Ireland's Teardrop' because it was the last part of the country that Irish emigrants would see as they sailed to the United States in the 19th century.

Fastnet Rock is a small clay-slate islet with quartz veins. It rises to about 98 feet above low water mark and is separated from the much smaller southern Little Fastnet by a channel 33 feet wide. Fastnet also gives its name to the sea area used by the BBC Shipping Forecasts.

The name "Fastnet" may possibly be from Old Norse; it has been suggested that it is from Hvasstann-ey meaning "sharp-tooth isle". In Irish Gaelic it is called Carraig Aonair, meaning "lonely rock".

The Fastnet Race is an ocean yacht race held every two years. The course runs from the Isle of Wight to Fastnet and then back to Plymouth; a course of 608 nautical miles which has become one of the world's classic offshore yachting races.

Fastnet Rock is the hazardous midpoint of the race, out in the open Atlantic.

The rock is also sometimes used as a mark for yacht races from local sailing centres such as Schull and Baltimore.

The rock is dominated today by its great lighthouse; an important station given the dangerous rock on which it stands, in the midst of shipping routes. The current lighthouse is the second to be built on the rock and is the tallest in Ireland.

Construction of the first lighthouse started in 1853, and it first produced a light on 1 January 1854. The lighthouse replaced an early one built on Cape Clear Island in 1818, partly motivated by the loss of an American sailing packet, Stephen Whitney, in thick fog during November 1847 on nearby West Calf Island causing the death of 92 of her 110 passengers and crew. The new lighthouse was constructed of cast iron with an inner lining of brick and was designed by George Halpin.

The tower was 63 feet 9 inches high with a 27 feet 8 inch high lantern structure on top, giving a total height of around 91 feet. Its oil-burning lamp produced just 38 kilocandelas; barely 3% of a modern light's capacity. In 1883 an explosive fog signal was installed, which electrically detonated a small charge of guncotton every five minutes in fog.

The tower proved to be too weak and gales shook it such that crockery was sometimes thrown off tables, and a 60 gallon cask of water lashed to the gallery 133 feet above high water was washed away. Steps were taken to strengthen the tower, including fitting a casing around the bottom section up to the second floor and filling it with stone, and the surrounding rock smoothed over, and in 1865 the lower floors were filled in with solid material. However ultimately all this was deemed insufficient. 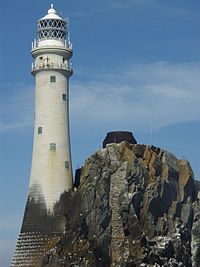 The second lighthouse on Fastnet Rock

In 1891 the Commissioners of Irish Lights had resolved that the light was not sufficiently powerful, particularly for the first landfall for many ships crossing the Atlantic Ocean. The replacement was built of stone, cast iron now being considered unsatisfactory: in a gale on 27 November 1881 the whole of the iron Calf tower above its strengthening casing had been carried away and the sea had broken the glass of the Fastnet Rock lantern.

The new lighthouse was designed by William Douglass and built under the supervision of James Kavanagh. Construction started in 1897 with the levelling of the site, and the first of 2,047 Cornish granite dovetailed blocks was laid in June 1899. As well as these blocks, weighing 4300 tons in total and with a volume of 58,093 cubic feet, a further 4100 cubic feet of granite was used to fill the inside of the tower up to the level of the entrance floor 58 feet above high water mark. A small steamship, the Ierne, was specially constructed for carrying the blocks out to the island, and Kavenagh personally set every stone, which weighed between 1.75 and 3 tons. The new lighthouse entered service on 27 June 1904 having cost nearly £90,000.

The masonry tower is 146 feet high, with the focal point of the light 159 feet above high water mark. The base of the lighthouse is 52 feet in diameter with the first course of stone 6 inches below high-water mark, and the first ten of the 89 courses built into the rock. The first floor of the original tower remains, on the highest part of the rock, having been left when it was demolished and converted into an oil store.

The original vaporised paraffin light was replaced with an electric one on 10 May 1969 and at the end of March 1989 the lighthouse was converted to automatic operation, monitored and controlled by the control centre at Dún Laoghaire.

The light produces a 0.14 second long white flash every five seconds, with a nominal range of 27 nautical miles and power of 2,500 kilocandelas. Since April 1978 in addition to being operated during darkness, the light is also used during poor visibility when the fog signal is sounding. The explosive fog signal was replaced with an electric fog horn in 1974 which produces 4 blasts every minute at 300 Hz with a nominal range of 3.9 nautical miles. The radar transponder beacon—has been a morse G on the radar display since its installation in 1994.