A light station was established on the island in the early 18th century, hence its name, and a lighthouse built in 1815. The lighthouse was taken out of service in 1884 but the ruined stump of the 52-foot stone tower remains. The ruins of the keeper's house have been rebuilt to house a bird observatory. The lighthouse was abandoned in favour a site on Mew Island, which is also called Lighthouse Island on occasion.

Light House Island is now owned by the National Trust and operated by the volunteer members of the Copeland Bird Observatory. 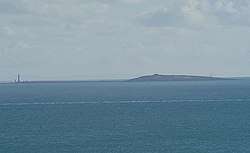 Overnight accommodation is available but only by arrangement with the Bird Observatory; access is by arrangement, on a small boat from Donaghadee harbour. The old lighthouse tower is closed.