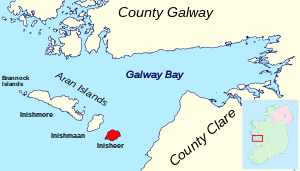 Inisheer; the easternmost of the Aran Islands

The official name, Inis Oírr, was brought into usage by the Ordnance Survey Ireland. It may be a compromise between the traditional local name Inis Thiar meaning "rear island" and the previous official name Inis Oirthir meaning "east island".[1] There is no Irish word corresponding to the second element in the official name. It seems from the annals that the island's name always contained the element iarthar or thiar in the sense of "rear or back island" and not "west" as is the usual sense of this word. The form Inis Oirthir, used by the 17th century scholar Ruaidhrí Ó Flaithbheartaigh, seems to have arisen out of his own misreading of the annals.

The island is an extension of The Burren. The terrain of the island is composed of limestone pavements with crisscrossing cracks known as "grikes", leaving isolated rocks called "clints".

The limestones date from the Visean period (Lower Carboniferous), formed as sediments in a tropical sea approximately 350 million years ago, and compressed into horizontal strata with fossil corals, crinoids, sea urchins and ammonites.

Glaciation following the Namurian phase facilitated greater denudation. The result is that Inisheer is one of the finest examples of a Glacio-Karst landscape in the world. The effects of the last glacial period (the Midlandian) are most in evidence, with the island overrun by ice during this glaciation. The impact of earlier Karstification (solutional erosion) has been eliminated by the last glacial period, so any Karstification now seen dates from approximately 10,000 years ago and the island Karst is thus recent.

Solutional processes have widened and deepened the grykes of the limestone pavement. Pre-existing lines of weakness in the rock (vertical joints) contribute to the formation of extensive fissures separated by clints (flat pavement like slabs). The rock karstification facilitates the formation of sub-terrainean drainage.

The island has an unusually temperate climate. Average air temperatures range from 15 °C in July to 6 °C in January. The soil temperature does not usually drop below 6 °C (end 2010 recorded a prolonged period of snow, the first in living memory). Since grass will grow once the temperature rises above 6 °C, this means that the island (like the neighbouring Burren) has one of the longest growing seasons in the British Isles, and supports diverse and rich plant growth. Late May is the sunniest time,[2] and also likely the best time to view flowers, with the gentians and avens peaking (but orchid species blooming later).

The island supports Arctic, Mediterranean and Alpine plants side-by-side, due to the unusual environment. Like the Burren, the Aran islands are renowned for their remarkable assemblage of plants and animals.[3] The grikes (crevices) provide moist shelter, thus supporting a wide range of plants including dwarf shrubs. Where the surface of the pavement is shattered into gravel, many of the hardier Arctic or Alpine plants can be found. But when the limestone pavement is covered by a thin layer of soil, patches of grass are seen, interspersed with plants like the gentian and orchids. Notable insects present include the butterfly the Pearl-bordered Fritillary Boloria euphrosyne, Brown Hairstreak Thecla betulae, Marsh Fritillary Euphydryas aurinia and Wood White Leptidea sinapis; the moths, the Burren Green Calamia tridens, Irish Annulet Odontognophos dumetata and Transparent Burnet Zygaena purpuralis; and the hoverfly Doros profuges.

Saint Caomhán, the patron saint of Inisheer, according to some traditions, was the elder brother of Kevin of Glendalough. The ruins of Teampall Chaomháin have to be uncovered annually as the floor of it is well below the level of the sand. In the Middle Ages, the island was ruled by the O'Brien dynasty who provided most of the Kings of Thomond. This rule was exercised since before the Anglo-Irish settled in Connaught in the 1230s. The Tribes of Galway paid the O'Briens an annual tribute of twelve tuns of wine "in consideration of their protection and expenses in guarding the bay and harbour of Galway against pirates and coast plunderers." The remains of a 15th-century O'Brien stone fort built is sited near the island's highest point.

The cargo vessel Plassey was shipwrecked off Inisheer in the 1960s, and has since been thrown above high tide mark at Carraig na Finise on the island by strong Atlantic waves. The ship features in the opening credits of the TV Show Father Ted.

A group of local Islanders, the Inisheer Rocket Crew,[4] rescued the entire crew from the stricken vessel using a breeches buoy- an event captured in a pictorial display at the National Maritime Museum in Dún Laoghaire.

The island is reached by ferry from Rossaveal in Connemara and Doolin in County Clare as well as from the other Aran Islands; or by plane from Connemara Regional Airport.

Irish is still today the daily language of the 300 residents. In addition, many school pupils come to the island to learn Irish in an environment where it is a living language.

Some of the limestone sea cliffs have attracted interest from rock-climbers,[5] though the bigger islands of Inishmore and Inishmaan are more popular. Diving is possible.[6]

Inisheer is mentioned in the song 'The Return of Pan' by the band 'The Waterboys'. Also, its Irish name is the title of the traditional Irish folk song "Inis Oirr".