Scattery Island or Inis Cathaigh is an island in the Shannon Estuary, off the coast of Kilrush, County Clare. The island is home to a lighthouse, a ruined monastery, an Irish round tower and the remains of an artillery battery.

The Irish-language name Inis Cathaigh was formerly anglicised Iniscathy, which later became Iniscattery and finally Scattery.[1] Most of the island is now owned by the Office of Public Works, who run a small visitor centre and carry out repairs and maintenance on the island. It was bought by Dúchas in 1991.

St Senan was born at Magh Lacha, Kilrush, County Clare, ca. 488 (died 1 March 560). His parents were named Erean and Comgella. His birth was prophetically announced by St Patrick on his visit to the Uí Fidgenti (in County Limerick) As a boy Senan was placed under the guidance of an abbot named Cassidan, finishing his studies under St Naul at Kilmanagh, County Kilkenny.[2]

Senan commenced his missionary career by founding a church near Enniscorthy, in either 510 or 512. The parish is still known as Templeshannon. He then visited Cornwall, founding a church at Sennen's Cove. Another was founded in Brittany at Plouzane (church of Senan). He is also believed to have visited Menevia, Rome, and Tours. He returned to Ireland around 520.

Having founded churches at Inniscarra (County Cork), at Inisluinghe, at Deer Island, Inismore, and Mutton Island, he finally settled at Iniscathay, or Inis Cathaigh, County Clare. He was visited by Saints Ciarán and Brendan, and other holy men, who had heard of his sanctity and miracles. Inis Cathaigh became not only a famous abbey but the seat of a bishopric with St Senan as its first bishop. This event may be dated as somewhere between 535 and 540. St Senan's jurisdiction extended over the existing Baronies of Moyarta and Clonderalaw in Thomond, the Barony of Connelo, Limerick as well as a small portion of Kerry from the Feal to the Atlantic. 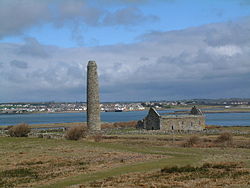 The legend of "St Senanus and the Lady", as told in Tom Moore's lyric, is founded on the fact that no woman was allowed to enter Inis Cathaigh; not even St Senan's sister, St Cannera, was permitted to land there. Yet St Senan founded two convents for nuns, and was actually on a visit to one of them when he died. Legend has it that when St Cannera died, she willed it that she should be buried near Senan. To stay true to his own edicts, Senan waited until low tide to bury her in the inter-tidal zone, which was not officially part of the "island", thus fulfilling his sister's wish while not breaking his own rules.[3] St. Senan was buried in the abbey church of Iniscathay on 8 March, on which day his feast is observed.

The Vikings first raided Inis Cathaigh in 815, killing many of the monks.[4] The monastery was plundered repeatedly until the Vikings came to settle there themselves in the mid-tenth century. This, in turn, led to attacks by Irish kings.[5]

Inis Cathaigh was a part of the Norse Kingdom of Limerick, which included not only Limerick itself but also several other bases in western and even northern Ireland. Given its strategic location at the mouth of the Shannon estuary, it effectively controlled all maritime traffic up the Shannon to Limerick. The Annals of Inishfallen record that during the 970s, Norse kings of Limerick were resident at Scattery Island.[6] In 974, Maccus mac Arailt, King of the Isles captured Ivar of Limerick, but he "escaped over sea" the following year.

Ivar of Limerick (last Norse king of the city), along with two of his sons, was slain on Inis Cathaigh by Brian Boru in 977. 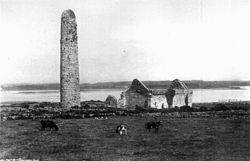 Scattery Island Cathedral and monastery is an early Christian place of pilgrimage, where St Senan, Bishop and confessor, founded a monastery, in the Shannon estuary, three miles south-west of Kilrush, County Clare. There are the remains of his oratory and house and of seven rude churches or chapels, together with a round tower and a holy well still in repute. It is fortified and marked by a lighthouse.

At an early period the abbot-bishop of the monastery was considered to exercise authority over what later became the dioceses of Killaloe, Limerick and Ardfert.[7] After the Synod of Ráth Breasail in 1111 a canonical diocese of Inis Cathaig (the spelling then current) was established. This was absorbed by the Diocese of Killaloe in 1189,[8] but was restored by Pope Innocent VI and continued as a separate see under Bishop Thomas (1358–68). In 1378 its possessions were divided, and the island remained a portion of the Diocese of Killaloe, being subsequently merged into the parish of Kilrush. However, there is mention of an Englishman, John Grene, as Bishop of Inis Cathaig in 1467.

Inis Cathaig is now listed among the titular sees of the Catholic Church.[9]

The artillery battery, located on the south of Scattery, was built during the Napoleonic Wars and is preserved quite well. The Shannon Estuary was one of 3 invasion places the French had considered along the west of Ireland.[10] As such, different places along the estuary were considered for establishing a defence. Scattery Island is one of 6 batteries in the estuary.[11] Scattery Island was chosen on the proposal of defected French general Charles-François du Périer Dumouriez.[12] The battery forms a semi-circular D shape with a dry moat. There would have been 6 separate guns on the edge of this D shape. These could fire out over the estuary. Even though they by themselves would not have been powerful enough to stop an invasion they would have been able to cause a lot of damage to any enemy fleet.

In 1842, after the salvaging the Windsor Castle, Inis Cathaigh was home to Shannon Estuary Pilots and their families. The primary families of the island were the Brennan, Melican, Scanlan, McMahon, Costelloe, Hehir, Moran, and Griffin. The river pilots were highly skilled mariners.

The inhabitants of Scattery Island appear to have escaped the deaths and emigration associated within Kilrush and most of Ireland during the famine period. The total population of the island including the soldiers, actually increased from 65 in 1841 to 99 in 1851 and to 139 in 1861. The numbers of houses in this period increased from 9 in 1841 to 24 in 1861. The memorial inscriptions on the gravestones do not show any deaths of islanders during the period 1845 to 1850. It is thought that a combination of fishing, additional shipping due to famine exports to England, along with piloting provided good employment for the pilots and their families.[13]