Donaghadee is a small town in County Down which lies on the northeast coast of the Ards Peninsula, about 18 miles east of Belfast and about six miles southeast of Bangor. It had a population of 6,470 people in the 2001 census.

The town boasts a number of pubs, including Grace Neill's (opened in 1611 as the 'King's Arms'), which claims to be the oldest on the island of Ireland, a record also claimed by Sean's Bar in the Republic of Ireland.[1]

Donaghadee as a town remained mainly unaffected by The Troubles although many of its residents lost loved ones as a result of the terror campaigns launched by terrorists. 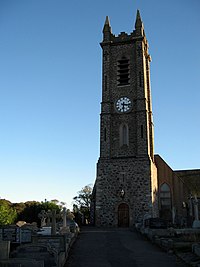 Donaghadee is probably best known for its lighthouse and harbour. For centuries, it has been a haven for ships, and the harbour has been there from at least the 17th century.

Sir Hugh Montgomery]] built a large stone quay to accommodate vessels ferrying between Downshire and Galloway from 1616 onwards.[2] Viscount Montgomery's harbour (1626; improved 1640), superseding what had hitherto been probably only a small jetty, was built and maintained as a result of the Royal Warrant of 1616 which limited travel between the Ards Peninsula and the Rhins of Galloway to this port, and that at Portpatrick also owned by Montgomery. It was described by Harris in 1744 as 'a curving quay about 400 feet long and 22 feet wide built of uncemented stones'. It ran from the shore at the north end of the Parade in a broad arc, bent against the open sea, towards the southern end of the present north pier. Much patched and decrepit, the quay was virtually rebuilt, though along the original line, between 1775 and 1785 by the landlord, Daniel Delacherois, probably with the help of John Smeaton, the distinguished civil engineer who had apparently made earlier more elaborate plans for extending the harbour, and who had just rebuilt Portpatrick harbour. The old quay remained until after the completion of the new harbour, and then, despite its continued favour by local fishermen, was removed for local wall building about 1833. (It appears in the 1832 drawing but not on the first OS map of 1834).

The foundation stone of the new harbour was laid by the Marquess of Downshire on 1 August 1821. The initial plans and surveys for this ambitious undertaking were made by John Rennie Senior, the celebrated engineer whose works included Waterloo, Southwark and London Bridges over the Thames. He, however, died within two months of work beginning, and was succeeded by his son, John, later Sir John Rennie, who had as his resident engineer the seasoned marine builder, David Logan, who had assisted Robert Stevenson at the Bell Rock Lighthouse (1807–1810). The new harbour had to have greater depth to accommodate steam packets. Rock blasted from the sea bed, within the harbour area and further south in what became known as the Quarry Hole at Meetinghouse Point was used to form the outer slopes of the two piers; but the inner faces were built of limestone from the Moelfre quarries of Anglesey. This 'Anglesea marble' lends itself to the finest ashlar dressing and the new piers remain a triumph of stone carving. The flights of steps display special skill in the deep diagonal binding of each solid step, providing a typically robust engineer's response to the wear of seaboots and waves alike. The harbour consists of two independent piers running north westwards out to sea; parallel nearer the shore, they converge at the outer ends to form a harbour mouth 150 feet wide. At low tide the water in the harbour is fifteen feet deep.

The Moat in Donaghadee was built to house the explosives for the blasting involved in the construction of the harbour. It is one of the most prominent features of the town. The Motte, or the Moat as it is known, dates back to 1818. Today it is part of a park, giving views across the town and seawards towards the Copeland Islands. The original mound was of Norman origin, when a motte and bailey stood on the site. It was initially used as a defensive structure, and provided an excellent look-out post.

During the summer Nelsons boats runs a licensed service to the Copeland Islands.

Visitors can also enjoy a number of scenic walks, including the marine walk at The Commons; 16 acres of semi-cultivated open space with bowls, tennis, putting and an adventure playground.

DMVC [1] was founded in 1932. It began as a small local chorus performing in churches and other local functions. From those beginnings the Choir has developed and flourished under the baton of a number of talented conductors - in particular the vigorous efforts of Robert Wilson, who has been its musical director since 1968. The choir's reputation for excellence extends far beyond the shores of Northern Ireland and Great Britain. Today it is known internationally - having performed on stage, radio and television as far afield as the USA, Canada, Malta and Bulgaria, where it was the first choir from Ireland to perform behind the former Iron Curtain.

The Choir has been extremely successful in competition, chalking up over 40 firsts in the male voice and open sections of many prestigious festivals in Britain and Ireland. These include Whitby, Morecambe, Wharfedale, Cheltenham, Bangor, Coleraine and more recently, at the AIMS New Ross Festival, where it achieved one of the highest marks ever given. It has also competed at the world-famous International Eisteddfod.

The choir celebrates its 75th anniversary during the 2007/08 season. With a membership of around 70 and a repertoire which embraces both secular and sacred music and ranges from folk and traditional songs to choral favourites and operatic works, it is well placed to continue to give pleasure and enjoyment to listeners at home and abroad through concert performances and CDs.

The Fusiliers' were founded in 1999 by seven local lads who believed they could produce a 'Blood and Thunder' style band to compete with other such bands in Northern Ireland. A lot of fundraising was required but that did not deter these lads from their dream and soon the band was able to purchase second hand flutes and drums. With only around 25% of the members being able to play instruments from previous bands it was a slow start but gradually the band began to take shape. The band was now able to take to the road, a collection parade was organised and the money raised from this was used to kit the band out in sky blue trousers, white polo shirts and sky blue Tam O'Shanter hats. These were exciting times for the band and membership grew steadily in the early months. The Fusiliers' first official engagement was with 'No Surrender' L.O.L. 241 for the 1st July parade in Donaghadee in 2000, this was followed by the 'Twelfth' and 'Black Saturday'. 2000 also saw the band break on to the competition scene with moderate success.

After the Fusiliers had decided they had achieved all they had set out to achieve, they wanted to end their run on a high, and called it a day in 2008. Subsequently the Flutes and Drums F.B were formed in the following year of 2009. They were formed by former members of the The Fusiliers who felt they owed it to the lodge to help them out as the lodge had helped them throughout the years. Initially the band was formed to parade on the main orange parades, i.e. the 1 July, the mini twelfth in Saintfield, the 12th July and the RBP parade on the last Saturday in August. After two years of this routine and with new blood coming into the band there has been a new thirst for gradually breaking into the competition scene again. The future is still unwritten.

Donaghadee in the media

Donaghadee served as the basis for fictional town Donaghadoo in the children's television series 'Lifeboat Luke'.

Donaghadee was used as a set for some of the film Mickybo and Me. Dozen's of local residents were recruited as 'extras' during the production which saw action take place in Bridge Street, The Parade, 'The Mushrooms' and the harbour/lighthouse

The town was also used as a location for Divorcing Jack which starred David Thewlis- particularly the harbour and seafront as well as houses on New Road. Scenes included a seafront market and a kidnapping

The Warren Road area was used as the location for 'Wild About Harry'.

In May 2009, the seafront was used as a location for the ITV Studios production 'Mo' which saw Julie Walters visit the town.

Donaghadee harbour was used for filming a scene for the 2011 film Killing Bono.

Donaghadee has facilities for a number of sports including cricket, tennis, Bowling, Darts, golf, women's hockey, football, sailing and rugby with teams that compete in various local leagues.

The formation of a rugby club in Donaghadee in 1885 came during a period of rapid growth for the game throughout Ireland. A review of sport in the Newsletter in December that year concluded; “Football has rapidly worked its way into the very front rank of our outdoor sports. The two codes of football – rugby and association – can claim a very large and increasing constituency in this country and the first half of the season has afforded ample evidence that, apart from the increasing numbers, our players are making remarkable strides in the science of the game.”

It was against that background that the new Donaghadee Club, formed by the Rev. Coote made its first match against Bangor on November 7, 1885. The game ended in a draw.

"The game was played in Donaghadee, possibly on the field behind the Church of Ireland Rectory – in other words on the very same place the Donaghadee club uses to this day."

The clubs grounds currently go under the name of Donaldson Park

Donaghadee Cricket Club is a member of the NCU Senior League.

Donaghadee Ladies' Hockey Club has been around since pre-war times. They currently have one team which plays in the Ulster Hockey Union's Ladies Senior League Four. The club has two training nights, with fitness on a Monday night from 7pm and skills and fitness on a Wednesday night from 7.30pm to 9pm, all at their home ground Crommelin Park (or the Dam Field for the locals). Clun colours are red, green, red.

Donaghadee Golf Club was founded in 1899 by Stephen Mccausland and is part links and part open parkland. The course features little in the way of rough but several water hazards lurk to catch the stray shot. The 18th hole is a finishing hole with out of bounds on both left and right, while the sea breeze can provide an extra challenge to visitors. This area of the County Down coastline and Donaghadee in particular provides views over the nearby Copeland Islands. The 16th tee is an excellent vantage point and the hills of Galloway are visible in the distance on a clear day. The club also provides catering facilities in the clubhouse. The golf club has a proud history, winning its second all Ireland trophy in 2007.

Donaghadee Sailing Club has been the centre of the sailing community for almost 40 years. The club has recently undergone a redevelopment and in May 2009 the new clubhouse opened. The new clubhouse makes DSC one the best sailing centres in Northern Ireland. It has extensive changing facilities and training facilities. The club also has a large lounge in which members and guests can relax and enjoy the panoramic views of the harbour and Donaghadee Sound.