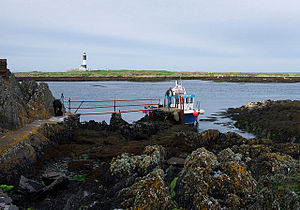 The Copeland Islands are a small group of islands belonging to County Down, lying in the North Channel, north of Donaghadee. There are three main islands and numerous islets, skerries and rocks, of which the main islands are:

They all lie within the parish of Bangor. They are all uninhabited, although Copeland Island was inhabited until the early 1940s, and Light House Island or Lesser Copeland contains the seasonally occupied Copeland Island Bird Observatory. Copeland Island is a fifteen minute sail from Donaghadee. The others lies apart, a mile or so to the north.

The Copeland Islands most likely derive their name from the de Coupland family, who settled in the Newtownards peninsula area along with other Normans in the 12th century. This family also lent their name to other landmarks in the vicinity such as Copeland Water near Carrickfergus and the townland of Ballycopeland in the civil parish of Donaghadee.

An alternative theory would have them named from the Old Norse Kaupmanneyjar, meaning "merchant islands", a name recorded for unidentified islands in the Norse saga Hakonar Saga Gamla, dated to 1230. It has been suggested that "Kaupmann" developed into "Copman" and then into "Copeland", with the form "Copman" recorded several times in the late 16th century in reference to the islands.

Over a century ago, Copeland Island had a population of about 100, including a school master with 28 pupils. In 1671 James Ross obtained a fee farm grant of these and in 1770 David Kerr purchased the islands from the Earl of Clanbrassil.

As the northern islands were a danger to ships entering Belfast Lough, a light beacon was made on the Ligh House Island (then Cross Island) in about 1715, it burned over 400 tons of coal every year. In 1796 the new British and Irish Lighthouse Board announced the erection of oil lamps and in 1813 the new lighthouse was built. In 1884 a new lighthouse was built on Mew Island. In 1954 the Bird Observatory was established by Arnold Bennington.[1]

Until the 20th century, the islands were used by smugglers who brought tobacco and spirits through the islands and into County Down. 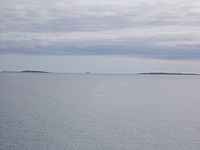 The Copeland Islands seen from a Stena Line ferry

Copeland Islands ASSI encompasses all the isles. The islands are important sites for breeding seabirds and waders, in addition to their coastal plant communities and geological features.

Big Copeland supports the most diverse range of habitats of the three islands. Communities influenced by the sea are found around the shore with maritime cliff vegetation and pockets of salt marsh also present. The centre of the island is occupied by semi-improved wet grassland with frequent areas of marsh.

Mew Island is dominated by rank stands of grass and Bracken but, as on all the islands, notable areas of inter-tidal and exposed rock habitat are present.

Big Copeland has an internationally important Arctic Tern colony, with some 550 pairs. The site now represents the largest colony for this species in Ireland. Mew Island has been an important tern colony in the past and it is hoped that positive management will encourage terns to become re-established. The islands are the most important breeding sites in Northern Ireland for Common Gull with over 250 pairs present. Big Copeland has recently held Northern Ireland’s first successful breeding pair of Mediterranean Gull. The islands are home to a nationally important population of breeding Eider Duck. In total the three islands account for 14% of the Irish population. Non-breeding Eider form part of the nationally important population that occurs along the Outer Ards coast and Belfast Lough areas.

Other breeding colonies of note include Black Guillemot, Water Rail and Stock Dove. The latter species has suffered a dramatic decline in these waters, but numbers have increased on Copeland with some 100 pairs now breeding. Breeding waders such as Lapwing and Snipe may be found further inland. Here the taller vegetation, interspersed with open areas, provides an ideal breeding habitat. Birds of prey favour the islands when the breeding season is over. Hen Harrier, Sparrowhawk, Buzzard, Kestrel, Merlin and Peregrine Falcon are all seen regularly.

Grey Seal and Common Seal can be found off the Copeland Islands in significant numbers. They utilise the off-shore islands and reefs as haul-outs and as pupping and mating sites.

There is public passenger boat service to the islands during the summer months from Donaghadee harbour, allowing a visit of a few hours.

A light station was established in the early 18th century and a lighthouse built in 1815. It has been inactive since 1884 but the ruined stump of the 52-foot stone tower remains. The ruins of the keeper's house have been rebuilt to house a bird observatory. The lighthouse was abandoned in favour of the Mew Island Light to the north.

Light House Island is now owned by the National Trust and operated by the volunteer members of the Copeland Bird Observatory. Overnight accommodation is available but only by arrangement with the Bird Observatory. Located on Lesser Copeland Island, also called Lighthouse Island, a small island off Copeland Island about 4 miles north of Donaghadee. Accessible only by boat. Site open, tower closed.